Digital streaming is the #1 way people consume music. Streams equated to almost 85% of US album sales in 2019, which means pushing physical copies is a thing of the past for most artists. Beyond just uploading to the platform, Spotify playlist placement is one of the best ways to have your music exposed to a wider audience.

Playlist promotion can be a huge push for up-and-coming artists. The biggest playlists on Spotify have millions of followers, but even smaller ones in the thousands or tens of thousands of followers are important for promotion.

Being an independent musician and handling your own promo isn’t easy, which is why Spotify music promotion via playlisting can be such a big deal for new artists. But there’s also the mystery of how Spotify playlist placement works in the first place…

One thing to keep in mind is that Spotify themselves have said there’s no way to pay your way onto a playlist. Further, anyone claiming to offer that service is a scammer. There are supposed legitimate playlisting services popping up all over the place, but we won’t talk about those here.

Instead, we’ll focus on organic ways to do free Spotify playlist submission.

Spotify for Artists has tons of valuable resources to help independent musicians determine their approach to promoting music on the platform. One of the most important services it offers is direct playlist pitching. That’s right — you can get Spotify playlist placement just by asking Spotify.

After you’ve signed up for Spotify for Artists, you can navigate to the ‘Upcoming’ tab which is where you can choose music for playlist consideration. Spotify only lets you pick one song for submission, so choose carefully.

There are a couple of other things to keep in mind when pitching for playlists through Spotify for Artists:

The fine folks at Spotify receive thousands of submissions every day, so the more time they have to discover you, the better.

You’ll also want to offer as much info for your submitted music as possible. This is all done via a form you fill out once you’ve initiated the process.

Spotify requires lots of data to help match your song to the appropriate playlist(s). Editors search for new music based on this data that artists provide along with the song; so give yourself a better chance by including details on genre, ‘mood,’ and anything else you think is relevant. 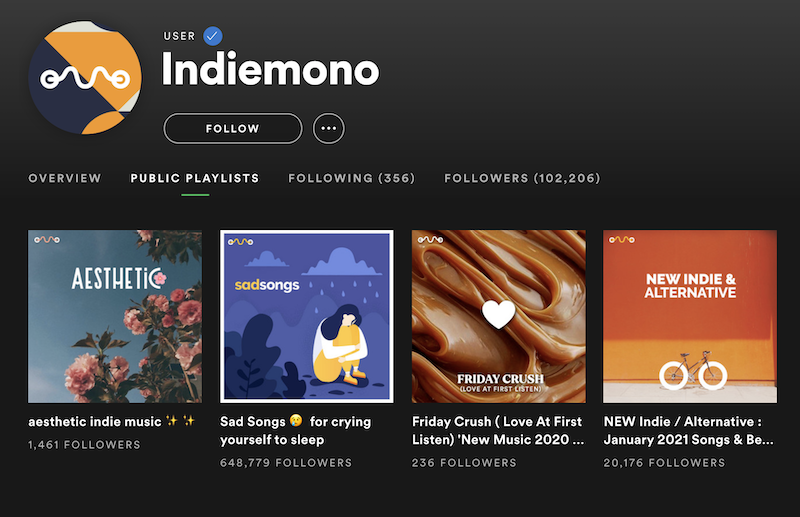 Independent playlists are any of those which Spotify doesn’t create themselves. But somebody has to put them together; these curators are the people you can get in touch with for independent Spotify playlist placement.

There are thousands of successful independent Spotify playlists made by all kinds of curators. They can range from big media outlets and industry people, to your average Spotify user/music enthusiast. This is where you’ll begin to do a bit of research.

First, take the time to cruise through Spotify for playlists that suit your sound. The more you come up with will increase your chances of finding a curator who’s willing to support you.

Every playlist shows the author’s username at the top, so jot that down and hit a Google search to track down their contact details. Many times you’ll be able to find an email address, or perhaps even a submission form if it’s a larger outlet doing the playlist curation.

From here, you’ll want to employ some basic professional email skills. Keep it short, friendly, and be sure to include links to your music on Spotify. You want to make it as easy as possible for curators to understand who you are, what you’re asking for, and what your music actually sounds like.

Indiemono is one collective of independent curators accepting free submissions.

Spotify is the only streaming service which gives artists the opportunity to directly pitch their music for playlist placement and promotion. That’s ultimately the best way to be considered for Spotify playlist placement.

If at first you don’t succeed, keep at it. The competition is approximately 20,000+ submissions to Spotify every day, and perhaps hundreds or thousands for independent curators as well. Anything you can do to grow a following outside of playlist placement will demonstrate your value for playlist consideration!