Andrew is a 3x GRAMMY winner for his work with Adele, Red Hot Chili Peppers, and Ziggy Marley. Additionally, his mixes have received more than 20 GRAMMY nominations in various categories, such as Best Rock Song, Best Rock Album, and Best Hard Rock Performance. Andrew was named International Engineer of the Year Award by the UK’s Music Producers Guild, where he is currently based.

Andrew Scheps started as a musician.

A Long Island native, Andrew got his start in music playing jazz trumpet. After some time he realized what he enjoyed most was working behind the scenes, helping artists perform their best. He got a touring gig as a keyboard tech for Stevie Wonder and eventually did live sound for Michael Jackson! Andrew’s home is in the studio, though, and he sharpened his skills working for major producers like Rob Cavallo, Don Was, and Rick Rubin.

Andrew isn’t just an amazing engineer and mixer, however. He’s also been a producer for Favez, Gogol Bordello, The Duke Spirit, Low Roar, and others. Andrew also started and ran Tonequake Records. Tonequake is a boutique indie label with acts he produced including Low Roar and Favez, and others like Act Rights, Heidi Happy, Twenty Two Hundred, and more.

After some 25 years working in Los Angeles, Andrew relocated to the UK in July 2015 where he set up his own mix room, Punkerpad UK. He also partnered with Monnow Valley Studios—a very famous residential recording studio.

There, he put his Neve 8068 MKII and extensive collection of outboard gear, microphones, and instruments into one of the best sounding rooms in the UK, even if he’s drastically scaled back his workflow over the past several years.

As of 2015, Andrew has worked entirely in-the-box.

About halfway through mixing Irish artist Hozier’s self-titled debut in 2014, Andrew took his workflow fully ITB. He said of the decision:

“Going back into the box wasn’t a sonic decision, but I actually rediscovered that I really like it. It’s great to be able to work on three or four songs at the same time. I have not gone back to working on the desk since then. While I miss some of the visceral hands-on aspects of the console, there is a lot of creative freedom working this way. It might seem like a drastic change, but it is only the tools that have changed: remarkably my philosophy and sound have stayed the same.”

Andrew is famed for his modern, balanced, loud mixes, and remarkably, transitioning away from analogue mixing hasn’t changed his sound at all.

His ITB workflow led to developing plugins with Waves.

Andrew has a few plugins with Waves, including the Omni Channel, the Scheps 73, and the Parallel Particles. 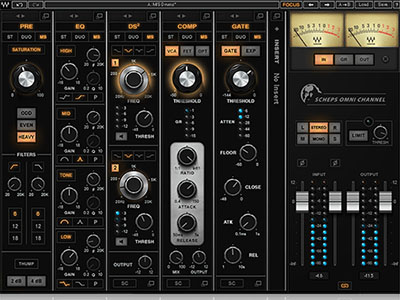 The Omni Channel is designed to provide the best of the analogue and digital worlds: “Through years of mixing diverse music genres, Andrew Scheps has perfected certain combinations of go-to processors – some based on classic hardware units, some being innovative modules developed from scratch – each with its own unique character. They are all now provided to you in one flexible yet fully cohesive channel strip plugin.”

The Scheps 73 is based on the Neve 1073 console preamp and EQ: “The Scheps 73 EQ features interrelated bands that adhere to the 1073’s original specs and precisely emulate its behavior: a fixed 12kHz high-frequency band, switchable low and midrange bands with cut and boost controls, and an 18dB/octave high-pass filter.

“Additionally, for the first time ever, a little-known 10kHz midrange band discovered in the original 1073 schematics but operable only on the rare 1078 channel strip has been modeled and incorporated into the plugin. And to top it all off, the Waves MS matrix has been added to let you apply different equalization to mid and side stereo content.”

His Parallel Particles plugin is a tone-shaper with intuitive controls relating to Andrew’s go-to mix processes, including parameters for sub, air, bite, and thickness. Andrew has said of the plugin, “[Parallel Particles] is about attitude, energy and emotion. You can find the sound you want, without having to figure out which of the traditional tools will get you there. It is as much an attitude shaper as a tone shaper, so you can focus on how you want your tracks to feel.” With one knob for each of the four areas, you can dial in and out any combination which suits your mix!

Amongst his phenomenal credits, the Chili Peppers stand out.

In a fantastic interview with Universal Audio Andrew dished on what it was like engineering the band:

“They are some of the best players I’ve ever worked with, and they track as a band. They will do plenty of overdubs, and things like that, but when they’re tracking, everybody’s playing and Anthony [Keidis] is singing. And it’s great, because that way you know what you’ve got — they’re not just going for drums. And they may replace stuff, or they may not, but they absolutely play. And they’re one of the best-playing bands around, they’re amazing.”

Andrew mixed 7 tracks on Adele’s 21, for which he won a GRAMMY.

He shared a little insight into the whole process. The following is an excerpt from the interview mentioned above:

“I originally mixed seven tracks, but only four of them made it onto the record/ I think they’ve used a couple more for B-sides or for when different territories get extra songs. On that project, I probably had to do the least amount of processing I’ve ever done—and this includes the band tracks, not just her vocals. There was one mix where I think I only had five EQs in, total, a little bit of spring reverb, and a compressor across the bus, and that was it. It was just the sound of the tracks—it was very well recorded. Greg Fidelman recorded it, and did a great job. And the band was great, and it was all live. I don’t know how much of the live vocal they kept. But she’s so good that huge portions of the vocals on the album could have been live.”

Andrew Scheps has enjoyed an amazing career and continues to lead the industry with his incredible ITB mixes!