The 6 Best Center Channel Speakers for Any Budget [2023 Guide]

A center channel speaker is a component in any surround sound set-up for post-production, surround mixing, or home theater entertainment. Typically when designing a surround system, you would match the center speaker to the others, and oftentimes brands will offer complete packages for surround sound. If you’re shopping individually, we’ve collected several of the top speakers for center sound.

What Is a Center Channel Speaker?

When post-production engineers mix for film and TV, the center channel is reserved for dialogue, while other elements are placed throughout the 5.1 soundstage.

What Are Center Channel Speakers Used for?

In the studio, you’ll find them as part of a surround mixing system. For consumers, they’re part of home theater entertainment systems. Mixers place dialogue in the center channel so that it has its own space; sound effects, ambient noise/room tone, and other sounds occupy the front left and right channels, as well as the back left and right channels as it makes sense for the mix.

How Can Center Channel Speakers Help You in the Studio?

Most of the time, you’d only want a center channel if you’re building a surround mixing setup. Standard stereo mixing uses a pair of studio monitors for the left and right channels, while a “phantom center” exists between them for elements not panned left or right. A dedicated center channel serves as part of larger whole, such as 5.0, 5.1, 7.1, etc. surround system.

The 6 Best Center Channel Speakers for Any Budget

Klipsch produces some of the best home speakers in the world. The impressive RP-504C center channel is a beast of a speaker, consisting of four 5.25″ woofers and 1″ tweeter — the culmination of over 70 years of experience designing some of the finest speakers ever made. This center channel offers crystal-clear dialogue and lyrics and would make a fine addition to any home theater.

Home theater audio doesn’t have to be costly. The Polk Audio T30 exemplifies that, boasting a formidable pair of 5.25″ woofers and a 1″ tweeter in a compact housing for $99. It’s powerful enough to fill small and medium-sized rooms, and the majority of consumers would be blown away by how good it sounds for the price. In our opinion, this is one of the best budget center channels around.

While it’s certainly a point of pride for manufacturers who can produce a sleek and elegant speaker that isn’t an eyesore, unfortunately not all center channels are made equally. That’s where Yamaha steps in with the NS-C210. This low-profile center speaker contains a pair of 3″ woofers and a 7/8″ dome tweeter, housed in a nondescript black box that draws no attention to itself. Fitted on a shelf, it would blend in to any environment. 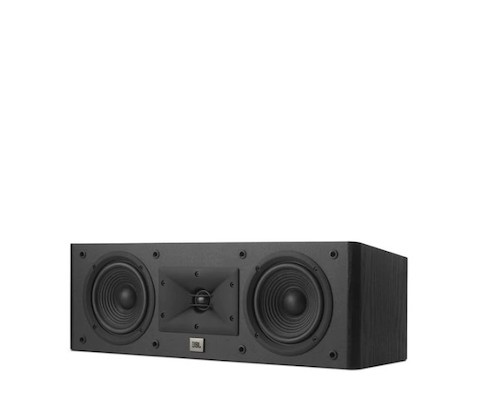 JBL’s Arena 125C center channel takes inspiration from their premium reference monitors. Part of that incorporates their patented waveguide technology which disperses sound throughout the room in an innovative way. The 125C contains two 5.5″ woofers and a 1″ dome tweeter for plenty of power, excellent imaging, and a balanced overall sound.

The Sony SSCS8 is a two-way, three-driver center channel speaker with precise sound reproduction and imaging. Natural sounding vocals and dialogue shoots straight at the listener thanks to the wide dispersion “super tweeter,” with a frequency response up to 50 kHz for unmatched clarity. This speaker not only sounds great, but is a great value as well.

The Paradigm SE 2000C is an understated center channel. Sound quality is the company’s top priority, showcased by a unique Perforated Phase-Aligning lens covering the tweeter. What it does is block out out-of-phase sounds for a smoother output without coloring the sound in an unnatural way. Visually, the speaker has a clean look that would fit in most living room nicely.