Before people started working in-the-box, VU meters measured the average level of a signal. You’d see them on consoles and outboard gear for measuring input or output level as well as gain reduction on compressors. The default digital meter is what most of us go by these days, but VU meters are still useful! These are the best free VU meter plugins in 2022.

What is a VU meter?

VU is an abbreviation of ‘volume unit.’ Bell Telephone invented the technology in 1939 and it hasn’t changed much since. What a VU meter does is track and display the average level of any given signal. It’s easiest to describe these classic meters in relation to today’s digital meters inside a DAW. Let’s do it!

Most default DAW meters measure volume in decibels full scale. We know that 0 dBFS is the limit for digital audio; anything above that is considered clipping. Full scale meters are also extremely precise, catching moment-to-moment peaks and drops in volume.

VU meters, on the other hand, are not quite as exact. They show us the average of all those quick peaks and dips—an overall picture versus a quick snapshot. Now, you could argue that VU meters aren’t as accurate as digital full scale meters, and you wouldn’t be wrong. VUs don’t show us exactly how loud something is at one particular moment.

Many people will tell you that VU meters more accurately show us what people are truly hearing; that is, the overall loudness and energy/feel of a signal. The accuracy of digital full scale meters is so precise—no one can actually hear a .1 dB fluctuation for half a second! That’s why VUs are still useful in a DAW: they’re an organic representation of power as opposed to a mathematical reading.

One last though to help us read these free VU meter plugins once we have them. 0 on a VU meter is equal to -18 dBFS—plenty of headroom. So if a VU goes into the red—they go up to +3—don’t worry!

VU meters read from -20 to +3, and that’s pretty much standard across the board. You honestly won’t find a ton of variation amongst these free VU meter plugins, apart from maybe an extra feature here or there. Without further stalling, these are the top 5 free VU meter plugins in 2022. 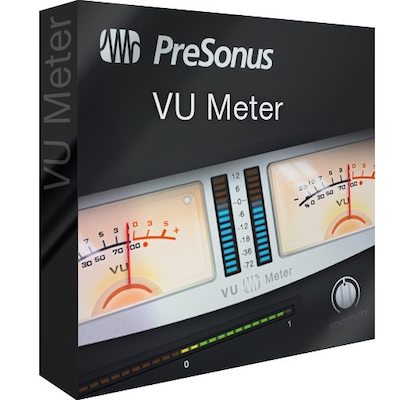 A simple, analogue-style meter for mono or stereo sources. This is a 2-in-1 meter showing classic analogue VU, as well as an LED peak meter in the center of the plugin. It’s sort of a best-of-both-worlds solution to metering in a single free plugin.

Bam. Another excellent free VU meter plugin. Like the PreSonus, you can monitor other level modes as well, including RMS, peak, and perhaps the lesser known EBU R128. Aesthetically you can choose from five different themes and scale the GUI up to 400%.

A very simple and straightforward VU plugin. You can choose to monitor either VU or PPM (program peak meter).

I.e., level meter. Like the others, you can choose to meter VU, RMS, or peak on stereo sources. The GUI looks like a modern take on retro VU design.

A comprehensive free VU meter plugin that can be set to peak, program peak, power, or VU.

Any of the five plugins listed above would be a great introduction to a different, classic style of metering we don’t often use in our DAWs. The main takeaway is that VU meters show us the broader picture of a signal’s average perceived loudness, which tells us a lot about the overall energy of an instrument or a whole mix. Try using a VU meter during a transition from verse to hook; if the needle doesn’t move when the chorus comes in, maybe that part needs more energy!