VU Meter: Just How Useful Are They?

Most of us have a rough idea of what a VU meter does. But unless we spend a lot of time around analogue outboard gear, we probably aren’t super familiar with them. And let’s face it, many of us are working entirely in-the-box these days!

The VU meter — for “volume unit” — was developed in 1939 by Bell Telephone in conjunction with CBS and NBC. It’s designed to represent audio signal level and remained the standard well through the ’80s until digital came out. They’re still used on gear today, though, and of course you’ll find them on classic consoles and outboard gear. The VU meter is actually so useful that we have plugin emulations as well!

After DAWs came out, we started measuring level in dB Full Scale as opposed to volume units. So, the meters in your DAW are full scale meters that actually represent level differently than VU meters. The main difference is that a VU meter shows the average volume of an instrument; this is the opposite of the full scale meters in our DAW, which show the exact moment-to-moment volume of an instrument. 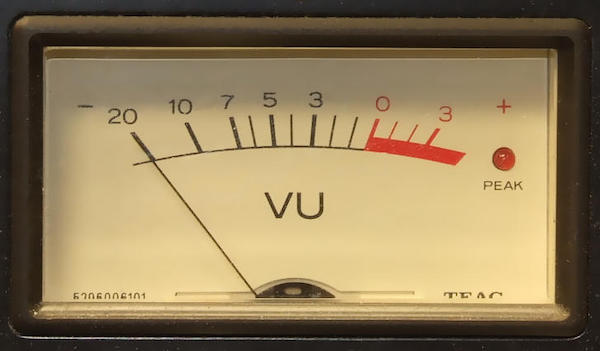 You could argue that VU meters are technically less accurate than FS since they don’t show every single peak and drop in level. However, they represent signal in a more natural way and are powerful tools to reference when mixing.

Even though full scale meters are extremely precise, that’s not how the human ear works. We don’t have supersonic hearing that catches every single change in level with pinpoint accuracy. Instead, we hear in averages the same way that a VU meter does.

So, VU represents “loudness” more than it represents volume — we can leave that to full scale. It’s more a representation of energy and what listeners feel.

Keep a VU meter at the end of your mix bus

Since VU measures energy more than volume, it can be really handy to have one at the end of your mix bus. A great trick to check where the meter hits transitioning from the verse to the hook. Hooks tend to have more energy and more excitement than a verse — if your VU meter is hitting the same spot on both the hook and verse, you might want to see how you can increase the energy in the chorus.

You don’t need to see a massive jump on the meter, but even just a dB or two louder can be felt by listeners. Again, we’re talking energy and “feel” more so than actual volume as it comes to VU meters.

When you have a meter on your mix bus, you should also be watching for big leaps in the average signal. For instance, if you see the needle jump 5 to 10 dB every time the kick drum hits, you have a level problem with the kick! You can go back and turn it down, or you can control those transients with compression; maybe a bit of EQ on the sub frequencies; some saturation to soften it, etc.

Records were made very differently before digital became the norm. Engineers used to print really hot and push their levels up to and beyond 0 dB on their VU meters. They did this because the noise floor with tape was so high, they had to print their signal above it.

Old consoles and outboard were designed to sound their best being pushed a bit. Today, we use plugin emulations of all this fantastic analogue gear — which means that sweet spot still exists, and is right at 0 dBVU!

Don’t be scared to hit 0 on a VU meter. We know that at above 0 dB Full Scale we start digitally clipping, and any increase in level will destroy our mix. But o dBVU is roughly the equivalent of -18 dBFS — a perfectly safe place to be. You’ll notice, too, that VU meters don’t stop at 0 and actually go positive by a few dB. Don’t be afraid to push it a bit into the red!