What Is a Preamp & Why Is It So Important?

People who are brand new to recording should ask the fundamental question, “What is a preamp?” They’re an indispensable, utilitarian part of the recording chain, though preamps can be colorful creative tools as well. If you’ve ever wondered what a preamp is or does, you’re definitely not the only one!

What is a preamp?

A preamp is an electronic device built into all sorts of different audio gear, like large-format consoles, DJ mixers, audio interfaces, and even computer sound cards or USB microphones. Preamps can also be standalone pieces of outboard equipment, some of which are incredibly famous and you’ve probably already heard of.

The cool thing about them is the odds are good you’ve used one, even if you weren’t fully aware of it. Chances are you own an audio interface and microphone, and you’ve plugged that mic into the interface to record. That’s the single most important use of a preamplifier right there. Or if you’re a guitarist, your amplifier has a preamp section which is the first to receive the output signal from your guitar’s pickups (it has a power amp section too!).

What does a preamp do?

When we record using a microphone, we are converting energy in a few stages. It starts with acoustic energy from the instrument hitting the mic’s diaphragm; the diaphragm begins to move, and converts the acoustic energy into an electrical signal. This signal generated by the microphone is actually very quiet; we call this mic-level.

So what does a preamp do? In short, it amplifies a quiet signal to nice and friendly record-ready volumes. 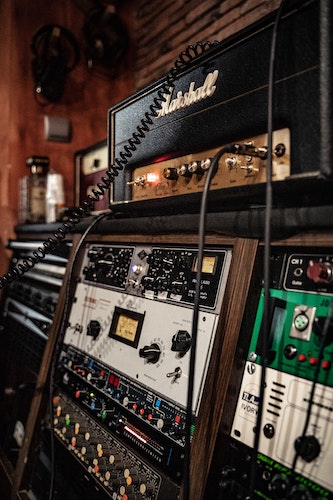 To put it simply, power amps come later in the signal path. Generally, they boost the line-level signal one last time to project the sound through physical speakers. A tube amp is a great example of equipment with both a preamp and power amp section.

The preamp section receives the guitar’s output and boosts the incoming signal to line-level. It also has EQ and gain controls to let you shape the overall tone of the signal. The preamp section of a tube head is usually equipped with 12AX7 tubes which give it its sound. A power amp is a more basic form of amplification which drives the line-level signal one last time to push physical speakers. The majority of amps out there have EL34 or 6L6 tubes in the power section.

Generally speaking, preamps are more complex electronically and deal with the finer details of boosting a low amplitude signal. Whereas a power amp takes the boosted signal and preps it a final time to run the sound through a speaker cabinet (in the case of a guitar amp).

Do I need a preamp?

Yes! If you plan to record with microphones, then you absolutely must have a preamp. But you probably already have one (or two, or four, etc.). Your audio interface comes with built-in mic preamps to boost the volume up to recordable levels. Most interfaces these days have crystal clear preamps with plenty of dB worth of clean gain on tap, which is to say they’re transparent. They don’t add any character to the signal, they just drive up the volume while keeping noise as low as possible.

If you want a preamp that adds tone and color to your mic signals, then you’re venturing into the world of outboard analog gear. Standalone preamps each have a character all their own. They really can make a big difference just in terms of the interest they add to a signal. Clean digital preamps can be quite sterile and boring, but analog preamps have that mojo that engineers are always talking about. 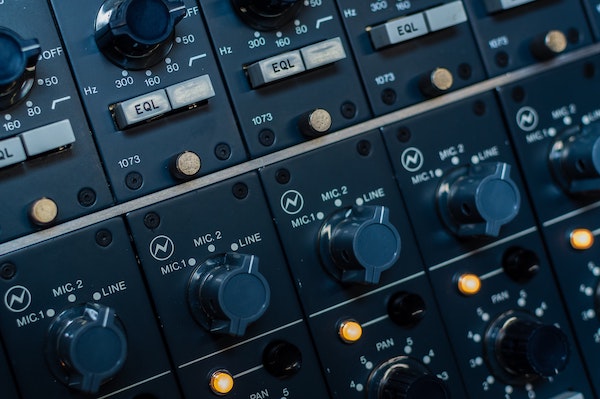 When your audio interface just doesn’t cut it anymore, it may be time to venture into uncharted territory. Dedicated high-quality preamps have plenty of magic on deck to breathe new life into your recordings. We’ll take a look at a few of the most popular studio preamps. For more, check out our guide on the Best Preamps for Any Budget. Alternatively, if you are looking to tackle your preamp needs in the box, you might want to check out some of the best preamp plugins on the market.

The ubiquitous 1073 is the most renowned preamp of all time. Since its inception, it’s not a stretch to say that nearly every piece of professionally recorded music has utilized a 1073 somewhere in the process. The 1073 is also one of the most-replicated preamps ever spanning a wide range of budgets. For anyone looking to upgrade their studio preamps, finding a Neve 1073 or 1073 clone is an excellent place to begin. The tone has been described as thick and rich, adding saturation when pushed harder, for pleasant color and musicality.

Another studio staple is the API 312. Engineers love them on drums for the way they’re able to preserve transients. The sound is somewhat transparent compared to other more colorful options, but there’s definitely a unique “thing” going on with API preamps that makes them legendary.

Avalon makes very popular preamps as well. The company is most noted for their 737 channel strip, complete with preamp, compression, and EQ sections. Avalon’s 737 is a go-to choice for vocal recordings.