The 10 Best Dynamic Microphones for Any Budget in 2022

Looking for the best dynamic microphone to fill out your recording arsenal? We’ve tracked down a number of them for various applications.

What Is a Dynamic Microphone?

Dynamic mics are a style of passive microphone that operate on the principle of electromagnetism. That may sound intimidating, but they’re actually the simplest style of mic. There’s a coiled wire attached to back of the diaphragm, and there’s a magnet surrounding the coil. As acoustic energy enters the diaphragm, it vibrates the coil and creates an electrical signal.

Dynamic microphones tend to be durable and relatively inexpensive. They’re not very sensitive because it takes a lot of energy to move the coil, so they’re frequently used on loud instruments like guitar cabinets, kicks, snares, and more—dynamic mics can withstand high-SPL abuse without distorting. This also makes them a stage favorite for live performance.

Condenser microphones are a different beast altogether. For one, they use capacitance to generate a recordable electrical signal. Because of that, they also require phantom power (or an external power supply in the case of tube condensers).

Their diaphragms are many times more sensitive than a dynamic microphone’s; as such, they’re much more detailed in sound reproduction.

The 10 Best Dynamic Microphones For Any Budget In 2022 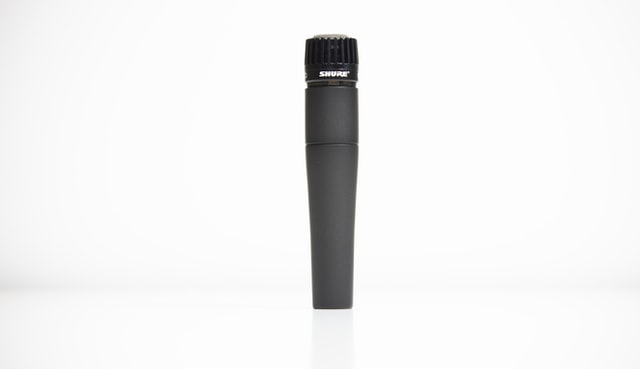 You’ll hear time and time again how beloved the famed Shure SM57 is. It’s been in every engineer’s back pocket for decades. The reason is, it’s cheap, indestructible, it sounds good, and it just works. Plain and simple.

The SM57 is quite often a favorite on guitar amps and snare drums, but a 57 has probably recorded just about everything at some point. You can snag a pair for less than a decent, budget-friendly condenser.

Next we have the SM58, which, to be totally transparent, is just a 57 with a metal pop filter built in. It’s the most widely used handheld live vocal mic ever, for the same reason the 57 has been a staple for years and years.

If you’re looking for a great mid-range vocal, podcast, or broadcast microphone, the Shure SM7B is a no-brainer. Bruce Swedien famously recorded Michael Jackson’s vocals on Thriller with an SM7, cementing the mic’s quality for many producers and engineers. You’ll frequently see the SM7B in podcast and live stream studios, and it’s awesome for aggressive vocal styles like rock, metal, and even rap.

In terms of popularity, Shure has its 57 and Sennheiser has its 421. It has a nice feature in a five-position bass cut switch, making it incredibly versatile. The 421 is a staple for recording toms, bass, guitars, and plenty more.

The EV RE20 is comparable in popularity and quality to the SM7B for broadcast applications. Vocals aside, it’s frequently used on bass guitar, kick drum, and floor toms as well.

Neumann aren’t necessarily known for their dynamic microphones, but they do exist. The BCM 705 is a higher-end dynamic broadcast microphone. Its design makes it less versatile and more application-specific than the other “broadcast” mics listed, but if you’re a podcaster or live streamer looking for the best, this is certainly an option.

For half the price of an SM57/58—yes, it’s that affordable—you can pick up a Sennheiser XS 1. This is a handheld dynamic vocal microphone with a convenient on/off switch on the handle. It’s perfect for beginners dabbling with recording, or even for live setups on a budget, such as in houses of worship, conference rooms, and the like.

Many dynamic microphones cater to vocals, whether for broadcast or handheld applications. Here we have something totally different—a refreshed version of the iconic D12, primarily used on kick drum and bass instruments. The SPL-handling is just ludicrous, which is part of why it performs so well lodged inside a kick. 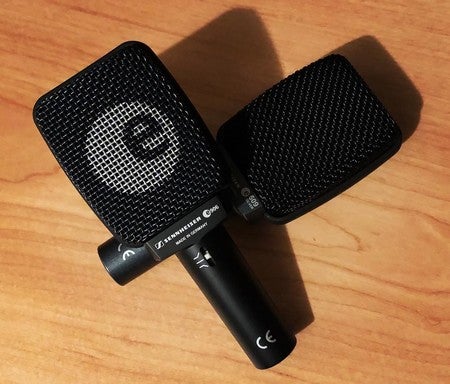 Another awesome purpose-built microphone is the e 609 by Sennheiser. This one has a cool flat square design meant to sit right up on a guitar amp or speaker cabinet. It’s light enough that you’ll frequently see these mics just draped over the front of an amp or cabinet by its XLR cable.

The Royer R-121 is a ribbon mic, which is actually a type of dynamic microphone. But instead of having a moving coil, it has strips of ribbon to generate electricity.

The R-121 is a modern classic, completely reinventing the notion that ribbon mics are these fragile, delicate things. This beast can take as much SPL as any other rugged dynamic microphone, and it instantly became a favorite on electric guitar.