The Best Condenser Mics for Your Studio in 2023 [Any Budget]

The best condenser mic will see constant use in your studio. There’s so much variety out there that it can be a bit overwhelming trying to sort the good from the bad, so we’ve put together a shortlist of some of our favorites. No budget is left uncovered — you can get amazing results no matter what!

What Is a Large-Diaphragm Condenser Microphone?

A large-diaphragm condenser microphone (“LDC” frequently throughout) is one of the most-used and most versatile studio tools there is. Without getting too into the technical details, it basically consists of two plates inside forming a capacitor that stores an electrical charge. One plate is thin and lightweight enough so that it moves in response to acoustic energy — that’s the diaphragm. The change in distance between the two plates, in response to the diaphragm’s movement, alters the capacitance and converts the acoustic energy from a sound source into a recordable electrical signal.

When Would You Use a Large-Diaphragm Condenser Mic?

LDCs are used for everything. Vocals, acoustic guitar, piano, drum overheads, strings, brass, guitar amps, room ambience…everything. The average home studio recorder, who’s likely cutting vocals and certain instruments, could buy one condenser mic and be done. They’re truly that versatile. Lots of LDCs have their own color that engineers prefer on specific sources, so while it’s desirable to own a bunch, a hobbyist could totally make do with one.

The Best Condenser Mics for Your Studio in 2023

We’ve said this before in previous related topics, but the world of budget-friendly LDCs is as saturated as it gets. On one hand, it’s never been a better time for recording enthusiasts to get into the field. On the other, options paralysis makes it incredibly hard to choose. A longstanding favorite is the AT2020 — a no-frills LDC that sounds pristine and costs only $99. A pair of these would go a long way in any studio! 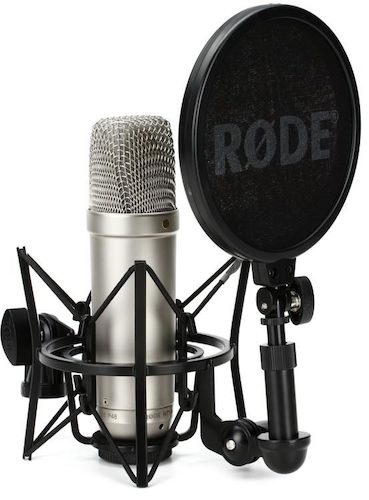 The Røde NT1-A is one of the best-selling LDCs for beginners. Part of what makes it so enticing is the package, which comes with a shockmount, pop filter, and dust cover. It can handle up to 137dB SPL for any musical sound source imaginable, and has an industry-leading low self-noise of 5dB. The NT1-A is noted for being a bright microphone — too much for some — but it’s undeniable popularity makes it a studio favorite.

It’s no secret that we’re huge fans of Lewitt here at PLAP. Many of their designs are truly unique, pushing the boundaries of classic microphone technology and modern-day innovations. The LCT 440 PURE may be one of Lewitt’s more basic offerings, but it’s sure to become a modern classic. This LDC is an all-arounder for home or professional studio applications.

The Mojave MA-50 is a super versatile project studio microphone with expensive sound at a fair price. The fixed-cardioid condenser mic handles SPLs up to 125dB, and the fast transient response makes it perfect for rapid-fire vocals or drums. It comes with its own shockmount and hard carrying case to keep it safe when not in use.

There may not be a single microphone as famous and ubiquitous as the venerable Neumann U 87. You’ve undoubtedly heard it on virtually every recording since its release in 1967 — it’s that popular. As a single high-end condenser, there are definitely worse choices. The U 87  is a flexible workhorse, and despite being pricey, it’s rarely a letdown.

Telefunken’s TF47 is a mid-range tube condenser mic with three switchable polar patterns. Inspired by the iconic U47, the TF47 model is a much more attainable microphone for the average engineer. Tube condensers are known to be smooth and mellow, and they work well on a variety of instruments. The TF47 is an inspiring microphone and would surely be a studio go-to.

The AKG C414 is a desert island condenser mic, no doubt about it. In addition to sounding incredible on any number of instruments, it packs a ton of features into a rather affordable package. The 414 sports nine polar patterns, up to 18dB of attenuation, and a stepped high-pass filter up to 160 Hz. This is a true Swiss Army condenser mic.

We’ve talked a lot about versatility and how many of these microphones are all-around workhorses. If there’s one mic to wear the crown, though, it’s the Lauten Audio FC-387. What makes it so unique from everything else on the list are its three switchable voicings to emphasize lows, mids, or highs. On top of that, it has three useable polar patterns for a multitude of recording situations, and three gain settings let you boost quiet sources or attenuate loud ones. The FC-387 is changing the game.

Final Thoughts on Choosing the Right Large-Diaphragm Condenser for You

In reality, budget is going to dictate whichever condenser mic we choose at the end of the day. That shouldn’t be a discouragement, though, because there are a ton of choices for amazing budget and high-end microphones. No matter what, you can achieve great results with whatever gear you have. If you have the opportunity to test any of these mics yourself, there’s no better way to help make a decision. Otherwise, online demos on different instruments can help you narrow your choices for the right condenser mic for you.