One of the best investments we can make as engineers, producers, and home recorders is in a premium microphone signal path. Purchasing a high-quality mic preamp, such as a tube preamp, is a huge way to elevate your recording quality and give your productions a touch of sonic mojo that’s hard to find anywhere else.

What Is a Preamp?

A preamp is a device that raises mic-level signals to line-level for recording. On their own, microphones generate only a barely audible signal which requires amplification for a more robust, and more recordable, signal. If you own an audio interface, then you’ve already used a preamp when you plugged your mic in for the first time and adjusted the gain to get the correct level.

Outboard preamps, like the best tube preamps, typically offer a unique sound attributed to the given device. Oftentimes they don’t have that sterile, ultra-clean digital sound you’d get from most audio interfaces; instead, a tube preamp has character and imparts a desirable sound quality on the recording. In some cases, outboard preamps also have equalization, filters, or even sometimes a dynamics section.

What Is a Preamp Used for & When?

As we mentioned above, we’d use a preamp any time we’re plugging in a mic to record. In studios with access to a lot of equipment, an engineer might have a favorite signal path based on the instrument they’re recording. For example, they might want a Neve 1073 preamp on vocals and an API 312 on snare drum. These are just two famous examples, but the principle applies across the board.

A preamp is the most indispensable tool after the microphone itself. To be fair, there’d be no recording without one. Full-sized consoles have a preamp section on every channel, and there are hundreds of varieties of outboard preamplifiers out there. The most popular of them are timeless and used on thousands of hit songs throughout the decades of modern recorded music. To answer “when” you’d use a preamp: all the frickin’ time!

Sonically, tubes are known for generating harmonic saturation that’s pleasing to the ear. You could use the dreaded “w” word (warmth) to describe the overall characteristic of a tube preamp. The only problem with tubes is that they do wear out over time and need to be replaced; they’re also not the greatest on particularly loud instruments like drums, for example, which can overload them into distortion pretty quickly (although that might be the sound you want!).

On the other hand, solid-state preamps tend to be cleaner sounding. They can also handle higher signal volumes without distorting, and they handle transient reproduction particularly well, so they’re great on drums and other instruments with fast attacks. Overall, solid-state amps are a bit cheaper than tube preamps, but you also tend to get what you pay for. A cheap solid-state preamp might not sound as good as you’d want it to, so it’s appropriate to invest in a high-quality solid-state preamp if that’s the sound you’re after. 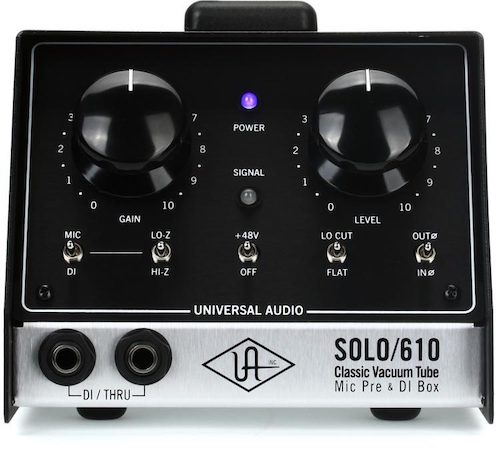 Universal Audio’s SOLO/610 is a renowned desktop tube preamp based on the legendary Putnam 610 console. It’s a single channel mic pre with DI. Volume is adjustable with a gain knob as well as a level knob to nail the perfect blend of tube saturation or cleanliness. It has a high-pass filter to eliminate rumble or excess low-end.

The Avalon VT-737 is the most renowned tube preamp on this list. Apart from the amazing tube preamp section, it’s actually an entire channel strip complete with a four-band equalizer and an opto-compressor section. In one word, the Avalon might be summarized as a “sweetener.” It can really take just about any microphone and make it sound fantastic.

One look at the PreSonus Studio Channel and the first thing that comes to mind is, “How on earth did they pack this much into a channel strip at this price?!” An absolutely ridiculous value, PreSonus offers a tube preamp section along with a three-band EQ, VCA compressor, and VU metering. This would be the perfect introduction to outboard equipment and tube amplification for first-timers.

In the world of outboard preamps, there are two generic flavors: British and American. The former referring to the inimitable Neve and the latter to none other than API. The API T12 is a gorgeous two-channel tube preamp with stepped mic impedance, stepped high-pass filtering, gain, level, and Hi-Z inputs on each channel in addition to independent VU meters. It’s not inexpensive by any means, but it’s quite a value for premium tube amplification.

The Manley Force provides four channels of lush tube amplification in a 2U rack chassis. One of the most striking features of this preamp is its design. Particularly, the curved LED meter is a brilliant touch that’s as unique as it is useful. Each channel has a 120 Hz high-pass filter, polarity reverse, Hi-Z input, and pad. The channel layout is highly intuitive, so you can focus on capturing amazing takes without any technical barriers.

Closing Thoughts: What Kind of Sound Are You Ultimately After?

The best tube preamps have a recognizable sound. They can be mellow and round, while also harmonically rich and saturated. If that’s the sound you’re going for, then you’ll love to add a tube preamp to your collection. In any case, if you’re serious about recording and production, having a big toolbox is almost essential to achieving a diverse range of sounds you and your clients are after.