If you’re a guitar player, there’s a good chance you’ve pondered the tube amp vs solid state amplifier debate. Most of the love gravitates toward tube amps, but there have been notable solid state players over the years as well. As we’ll see, both have their merits!

How Does an Amplifier Process Currents?

Without getting overly technical, an amplifier’s primary job is to receive an input signal, and then generate a totally new output signal which goes to the speakers. The guts of an amp determine how this process is carried out; namely, whether the device uses vacuum tubes or transistors (solid state technology).

What Is a Tube Amp?

Tube amp (also called “valve”) technology dates back to the early 1900s. Marconi Company, a British telecommunications firm, invented the diode vacuum tube in 1904, which marked a huge advance for radio and telephony. Even televisions started to use vacuum tubes in their design.

A valve guitar amplifier utilizes the same technology; it’s one of the few devices where tubes are still widely considered superior to transistor technology.

How Do Tube Amps Work?

Tube amplifiers have a set of specific (and smaller) tubes for the preamp section. The power amp section contains another set of larger tubes which drives the speaker in the amp or cabinet. Driving the power amp section hard is what gives you that lovely tube breakup that guitarists have fixated on for decades.

Unfortunately, tube amps are ridiculously loud. In most cases, you’d need to use an attenuator which reduces the overall output level while still letting you drive the power tubes into saturation.

Benefits of Using a Tube Amp

Most guitar players say tube amps sound and feel the most “natural” to them. That’s open to interpretation, but what it usually means is that tubes respond to a player’s dynamics incredibly well. In fact, the tone can change drastically on a tube amp just by varying your picking technique.

And because tubes saturate wonderfully, the overdrive/distortion is generally preferable over solid state amps. It tends to be rich and creamy, as opposed to the sometimes fizzy distortion you’d get out of a solid state amp or modeler. A similar sound applies to clean channels as well; they sound really full and organic.

What Is a Solid State Amp? 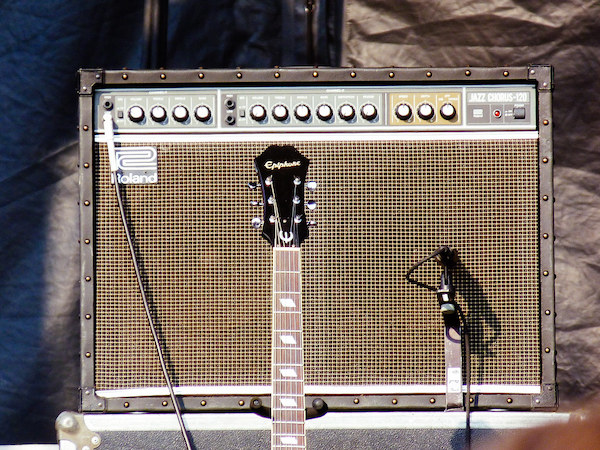 A solid state amplifier uses electronic transistors to reproduce sound. Transistor technology emerged not long after World War II, and many industries and styles of equipment made the shift from tubes to transistors.

Guitar amps, of course, remain an exception, in which tubes are still very desirable even though solid state amps are an option.

How Do Solid State Amps Work?

Internal transistor circuits take the incoming electronic signal and mold it into the waveform we hear coming out of the speakers. Just like a tube amplifier, solid state amps have a preamp section, a power amp section, and a space in between for EQ, reverb, and sometimes modulation effects.

Oddly enough, a lot of solid state’s benefits don’t have anything to do with sound. Solid state amps are more affordable, more durable, and lighter than most tube amps. Tubes are both fragile and heavy, but transistors minimize fragility and weight.

Arguably the biggest drawback to solid state amps, however, is in the overdrive/distortion department. Solid state amps have a pristine quality to them that’s nearly the opposite of what we’ve come to love about natural tube saturation. That said, transistor amps have come a really long way, and lots of them sound pretty good.

Tube Amp vs Solid State: Which Is Better?

Guitar purists will almost always tell you tube amps are superior. There’s so much to love about them with regard to both sound and playability/feel, but vacuum tubes are expensive, old tech. Not to mention that even low-wattage tube amps are just insanely loud for home studios and apartments without an attenuator.

But really, it’s not that solid state amps are worse—they’re just different than tubes. They have a different sound and feel that’s perhaps a bit less direct and dynamic, with more of a pristine “digital” character. Some notable players absolutely love solid state; the Roland Jazz Chorus is one of the most famous clean amps ever, popularized by guys like Andy Summers and Robert Smith.

Dimebag Darrell, considered one of the greatest metal guitarists of all time and a true innovator, played solid state Randall amps. Tom Scholz of Boston (and an MIT graduate), developed his own solid state amp/effects unit called the Rockman with his company Scholz Research & Development. It distilled the essence of Boston’s guitar tone and packed it into a small, portable unit.

On the search for your “holy grail” metal tone? Check out High-Gain Guitar Tone Crafting with Kristian Kohle!