We all know that Fender is one of most recognized and enduring brands in the history of electric guitar. Leo Fender’s innovations helped shape the landscape of music, providing musicians tools to reach new heights. The company’s greatest outputs are still favored by players everywhere and in numerous genres. Today, we’ll be walking through a Fender Blues Deluxe Reissue review to see how the new amp compares to the classic.

The Fender Blues Deluxe Has a Storied History (& Sound)

The Fender Deluxe amp goes all the way back to the late ’40s, with a production run from 1948 to 1966. The Tweed Deluxe of the ’50s was a medium-sized and powered combo tube amplifier. The idea was that guitar players could keep up with a small band and not be drowned out by other instruments.

The so-called “Tweed” Deluxe is named such because of it’s light brown cotton twill covering, revived in the reissue we have today. It still has a single 12″ speaker and two channels with shared controls. When Leo Fender first delved into amps, he actually wanted them to stay clean even when they’re pushed at high volumes. The original Tweed Deluxe is known for breaking up and saturating, which guitarists loved. To this day, it’s one of the most beloved amps Fender ever produced.

The Blues Deluxe Reissue is a two-channel 40-watt tube combo with a single 12″ Eminence Special Design speaker. The two channels are Normal and Drive. The amp has an effects loop, bright switch, and onboard Fender spring reverb.

The overall build quality is excellent from an amp of this value. Construction feels solid, and the lovely vintage tweed covering looks the part as much as it sounds the part of classic ’50s Fender.

Its body is medium-sized at approximately 19″ high, 23″ wide, and 11″ deep. The Blues Deluxe Reissue weighs a hefty 45 pounds but isn’t so heavy as to be a nuisance loading in or out. In regards to build quality, it’s also worth noting the amp’s upgraded modern circuitry.

The controls reflect those of the original amplifier. They’re situated on top of the amp near the rear, backed by a chrome faceplate. The controls themselves are simple: Presence, Reverb, Master, three-band EQ, Drive, and Volume. Despite its simplicity, the Blues Deluxe offers a good deal of versatility in addition to recreating classic Fender tone.

Most importantly, how the heck does this amp sound? It is every bit a vintage-voiced tube combo for blues, rock, and country players. It’s obviously just a tool for sound and not genre-exclusive, but players seeking a 1950s-style tone will get exactly what they’re looking for with this amp. It sounds good at both low and high volumes, and has that familiar and beloved break-up when you push the tubes hard in addition to plenty of clean headroom for chimey Fender cleans. What more could you want?

Blues Deluxe vs Hot Rod Deluxe: How Do They Compare? 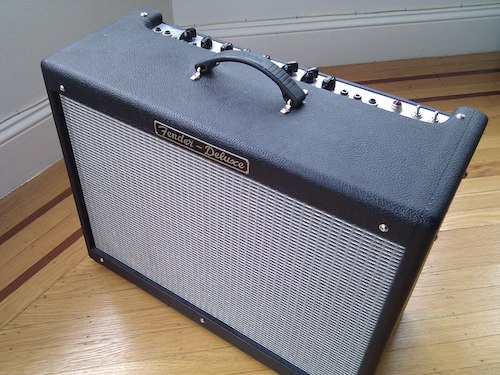 When Fender revamped the Blues Deluxe in the mid-90s, they made the Hot Rod Deluxe. It threw in a third, dirtier channel with different circuitry. It remains an extremely popular amp, but the Blues Deluxe Reissue is a bit more subdued. The Blues Deluxe today has the vintage vibe that players have loved forever.

Who Is the Blues Deluxe Reissue Made For?

The Fender Blues Deluxe Reissue is ultimately made for anyone looking for the classic American tone that revolutionized the sound of 1950s blues, rock and roll, and country. It’s an amp you can plug straight into and get iconic sounds. Considering the amount of clean headroom, it can also serve as a decent pedal platform.

A reissue is just that, and Fender nailed it with the Blues Deluxe. That sound from the ’50s isn’t a relic from the past; it’s a sound that’s still at home in contemporary music. If you want a timeless amplifier, this affordable reissue is the way to go.