The best violin microphone for stage or studio does a solid job of capturing the detail and nuance of the instrument. Violin can be incredibly intimate, so you’ll want to try and retain that delicateness with a microphone that captures it naturally. We’ve assembled a shortlist of violin microphones — some familiar and some less so — under the notion that you may recording in the studio or amplifying the violin for live sound.

Things to Keep in Mind When Miking a Violin

It’s an acoustic stringed instrument, so you’ll want to approach it as such. Both small and large diaphragm condensers are the typical favorites for strings, while the former, in many cases, offers a very detailed and hi-fi representation. The controlled studio environment will usually be less of a challenge than miking a violin on stage, in which you have to consider other factors like bleed. Generally speaking, however, you should approach the violin as you would any other instrument, and ultimately let your ears and instincts guide you to what sounds best.

A violin’s frequency range runs from approximately 200 Hz to 3500 Hz, with the highest practical note sitting closer to 2600 Hz. It’s a midrange/high-pitched instrument, so you’ll want to be able to capture its most prominent frequencies accurately. Just about any microphone has a wide enough frequency response for violin, but pay careful attention to how the mic captures these frequencies. You probably don’t want one that boosts the midrange or emphasizes unpleasant frequencies that would really stand out on a violin.

In most close miking situations, you’re going to want a cardioid polar pattern, which is the average point-and-shoot pickup pattern. It rejects sound from the back and sides and captures whatever’s in front of it. For live sound, you may want an even tighter pattern such as supercardioid or hypercardioid for additional rejection of off-axis sounds — this is to reduce bleed and isolate the violin as much as possible.

This is more pertinent to live sound. Sometimes you’ll be battling the room, but more than likely you’re battling a bunch of instruments surrounding your violin and the various reflections and bleed those introduce. Microphone directionality is going to be your friend in this case, so go for a tight polar pattern whenever possible. The same can be said for a less than stellar sounding studio room, but you’ll likely have more control in the studio than on stage. If you are having trouble with acoustics, opt for a tight pickup pattern and close miking techniques to reduce room tone.

The A-T PRO 35 is a cardioid clip-on condenser. It does a fantastic job of isolating the sound source by rejecting off-axis sound. The mic has an extended frequency response which is more than enough for violin, as well as a bass rolloff at 80 Hz to cut out any potential low-end rumble. Having a clip-on mount is extremely convenient for live sound, not only to reduce on-stage clutter, but also to get the microphone as close to the source as possible. 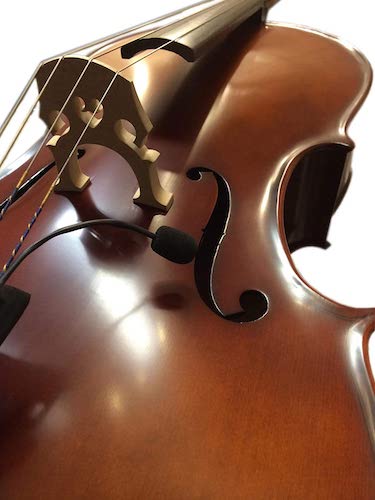 Ideal for live amplification, the Myers Feather pickup is an easy-to-use device requiring no modification to the instrument. It contains a battery-powered active preamp with a gooseneck microphone meant to aim at the soundhole. A 1/4″ output from the preamp can run to an additional amplifier or straight to a desk for amplification.

Widely regarded as one of the best large diaphragm condensers ever produced, the AKG C414 needs no introduction. This workhorse has been a fixture in every studio in the world for decades, namely due to its exceptional sound quality and versatility. In the studio, this could easily be one of the best violin microphones at your disposal, with nine polar patterns for virtually any miking scenario. 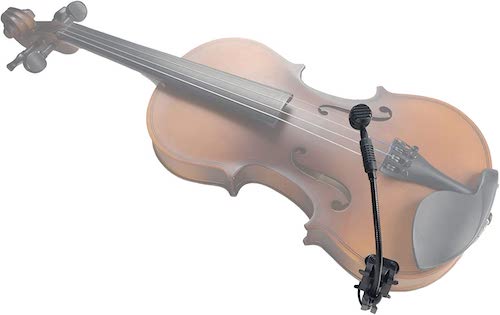 The HEIMU condenser is another clip-on microphone at a super affordable price. The clip gently but securely attaches to the outer edge of the violin, while the gooseneck stretches across the body to be positioned over the strings just north of the bridge. Clip-on microphones are one of the easiest ways to amplify a violin for live sound.

A small diaphragm condenser is a strong choice for miking violin in the studio. The Røde NT5-S has pronounced clarity and detail, and specifically captures instruments with a lot of high-frequency content exceptionally well. For right around $200, the NT5-S would make a stellar addition to any mic locker.