The Black Box HG-2 is a hardware unit designed to add saturation, harmonics, natural compression, and increased RMS for mixing and mastering. In one tool, it accomplishes what would normally require multiple stages of processing. HG-2 exists as a highly detailed plugin by Brainworx, offering attainable mastering grade saturation entirely in-the-box.

Black Box Analog Design’s HG-2 is a lovely, chunky box of $3000 tube goodness. Sounds range from a touch of harmonic richness subtle enough for mastering, to sizzling distortion that can tastefully destroy a single instrument in your mix.

The core of the HG-2 is two gain stages: Pentode and Triode. The Pentode tube generates even order harmonics for musical distortion like a guitar amplifier; the Triode tube creates grittier third order harmonics similar to printing a hot signal onto tape. Pentode feeds the Triode, and you can get a variety of sounds just pushing these gain stages against each other, as well as against the output.

There’s also a parallel circuit running off the input separate from the first Pentode stage. This parallel path utilizes a set of 12AX7 tubes voiced specifically for harmonics/saturation. The saturation circuit is equipped with a 3 way Freq. Select switch that allows you to focus the frequency content returning from the circuit.

Low saturates just the low-mids and sub frequencies; flat saturates the whole spectrum; and high works on just the high-mids and highs. The result is the ability to add top-end to dull, flat sounding tracks, beef up the low-end, or add energy and harmonic richness to the whole signal. From there, the Saturation knob lets you control how much of the processed parallel signal is fed into the main signal before hitting the Pentode stage. Finally, both Pentode and Triode hit the output attenuation before a pair of custom output transformers.

But that’s not all: Black Box HG-2 also features a simple Air switch, which adds a smooth high-frequency boost. Also, as part of the Saturation circuit, there’s the ability to hit an “Alt” button that switches between two different 12AX7 tubes for different flavors. 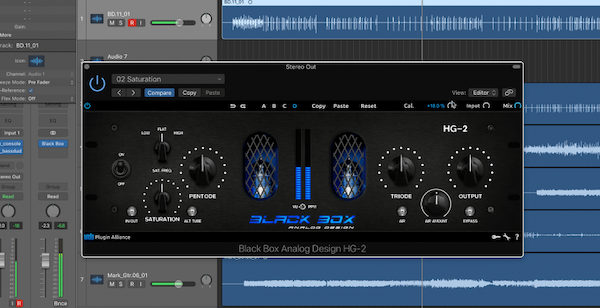 Black Box HG-2 is one of those hardware units begging for a software emulation. Not only is the ‘real thing’ expensive, but the HG-2 is so addictive you’ll want to try it on everything. That makes the plugin all the more valuable, being able to load up instances on individual instruments, groups, and the mix bus all at once.

Brainworx faithfully recreated the formidable saturation box in collaboration with the original designers for an exact-to-spec emulation. The main interface is a copy of the hardware, so all that stuff we talked about earlier functions the same way in the plugin. Digital-only additions include a wet/dry Mix control and a Density control that drives both tubes harder without changing their relative balance.

One of the complaints you’ll hear about the Black Box HG-2 plugin is that it doesn’t have automatic output gain. That’s purely a convenience that many of us have gotten accustomed to. Lots of plugins automatically match the output level to the original signal, so you’re never fooled by ‘louder = better.’ You’ll just need to be diligent keeping the output manually dialed.

The Thermionic Culture Vulture is considered the original all-tube saturation unit. For nearly 25 years, the British-made hardware has served plenty of mixes and masters with tasteful harmonic enhancement and downright dirty distortion. In that sense, it’s quite similar to the HG-2, but definitely has its own vibe.

UAD makes the software version of the Culture Vulture. Both the HG-2 and Culture Vulture are very, very detailed emulations of their hardware counterparts, and provide a similar palette of saturated tones. It really comes down to a matter of taste whether the HG-2 vs. Culture Vulture is more your speed. Both Brainworx and UAD offer 14-day trials, so it would be worth your time to A/B them if you’re on the fence.