Saturation is the secret weapon for adding some grit back to pristine digital recordings. Whether you just want to add a bit of body and richness to an instrument, or make it unrecognizable with blazing distortion, saturation is one of the funnest tools out there. By no means a comprehensive list, these are some of the best saturation plugins we’ve come to know and love.

Saturation is an incredibly versatile tool that ranges from very subtle to full blown distortion. That’s what makes it so amazing for individual instruments, groups, the mix bus, and mastering as well.

Best Saturation Plugins: What do they do?

One of the less obvious things saturation does is it allows us to increase the perceived loudness of a sound. It can actually control peak levels on something like, say, a snare drum — a loud instrument with really aggressive transients.

Grab your favorite saturation plugin, load it up, and turn up the drive. You’ll most definitely hear what appears to be an increase in overall level. But if you check your peak values, they can be quieter than they were without saturation. This is because the plugin is squashing those really loud transient peaks while adding fullness to the overall signal. Pretty amazing stuff!

Beyond that, saturation gives us some of that dirtiness we love from classic recordings that digital technology took away. Plugins that emulate tape or tube saturation are perfect for this type of thing.

It’s always hard to label something the ‘best,’ because ultimately it’s a subjective thing. These are some of our favorites, but the best saturation plugins are really whichever ones you’ve come to like!

Decapitator is super popular. That’s because it gives mixers a lot of control in an easy-to-use plugin. You can do anything from giving an instrument a bit of analog character to ‘punishing’ the signal with extreme distortion. It’s awesome!

In creating Decapitator, Soundtoys collected and analyzed vintage and modern hardware — consoles, preamps, input channels, EQs, compressors, and studio distortion units. Then they narrowed down the pieces of gear they felt had the most distinctive sound and had unique character when used both subtly and at extremes.

Finally, Soundtoys took their 5 favorite hardware pieces and packaged them up in Decapitator. This plugin is a game changer.

Radiator is a dual-drive tube input channel and EQ, based on the Altec 1567A tube mixer from the ’60s.

The original Altec 1567A hardware was a five-input tube mixer with removable transformers, a simple two-knob EQ, and a massive 97 dB of gain.

By digital’s standards, the sound it made was colored and gritty, with a huge portion of old fashioned hardware noise (which you can toggle on/off in the plugin; it’s noisy!). In its day, it was used on many early Motown hits, and now you can add it to your DAW for some classic analog dirt.

A colleague of mine uses it on anything he thinks sounds ‘boring’ — interpret that as you will. I’ve been using it on my background vocal bus not only for a bit of grittiness, but also to quickly EQ the highs and lows so they sit underneath the leads. 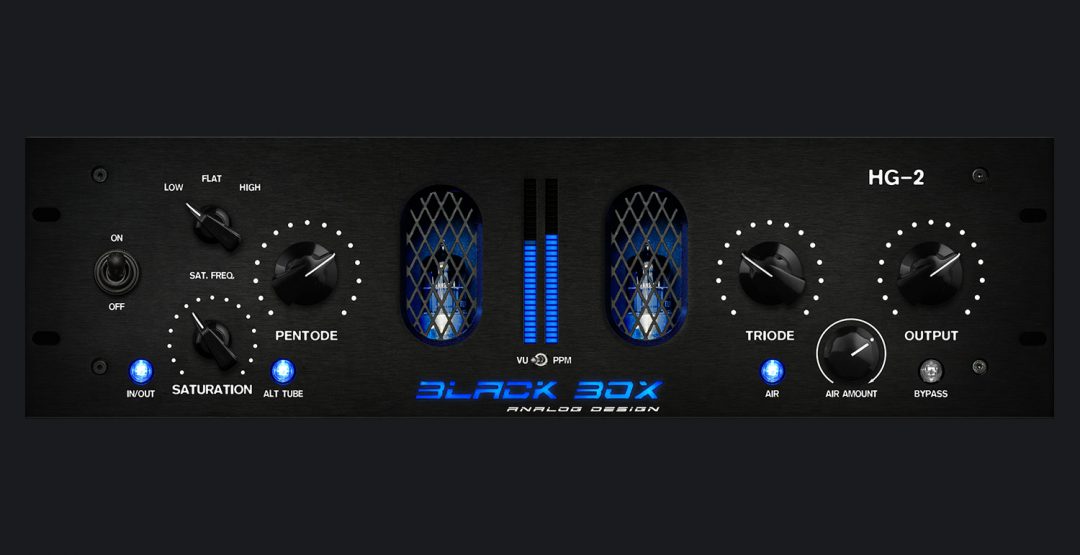 This is a faithful recreation of Analog Design’s Black Box hardware tube saturation unit. The Black Box has found its way into some mastering engineers’ chain, and is right at home on groups and mix buses. The boutique stereo processor’s multiple tube circuits not only make tracks sound richer and fuller, they also make them sound louder, bigger, and punchier at the same peak level.

HG-2 emulates four different vacuum tube stages combined in series and parallel circuits to color your mix and individual tracks with a range of rich harmonics. An added Air knob lets you control how much high-frequency ‘fairy dust’ you sprinkle on vocal tracks, string instruments, piano, and full mixes. Easily one of the best saturation plugins out there, perfectly at home anywhere in your mix. 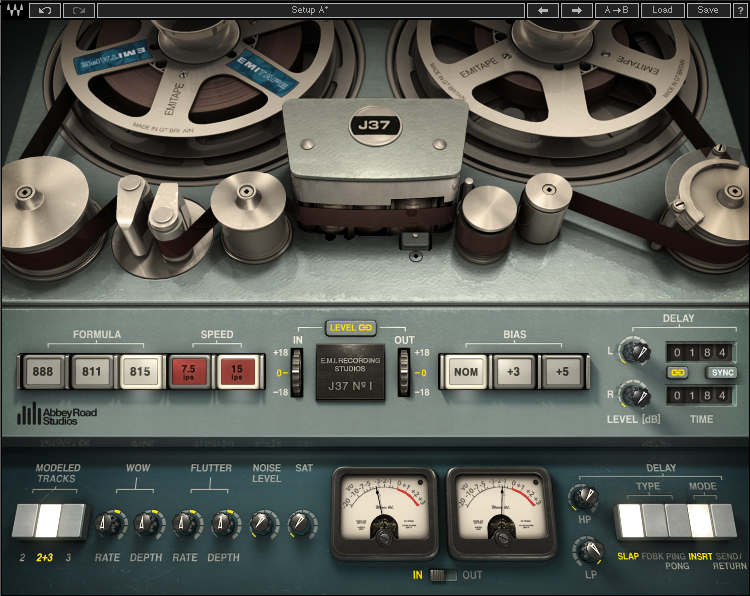 This is perhaps the most subtle saturation plugin on the list. It’s a tape machine emulation, so its job is to capture some of the more delicate features analog tape imparts on a signal.

In addition to the J37 itself, three exclusive oxide tape formulas have been modeled. Specially developed by EMI during the ‘60s and ‘70s, each formula has its own unique frequency response and harmonic distortion behavior. 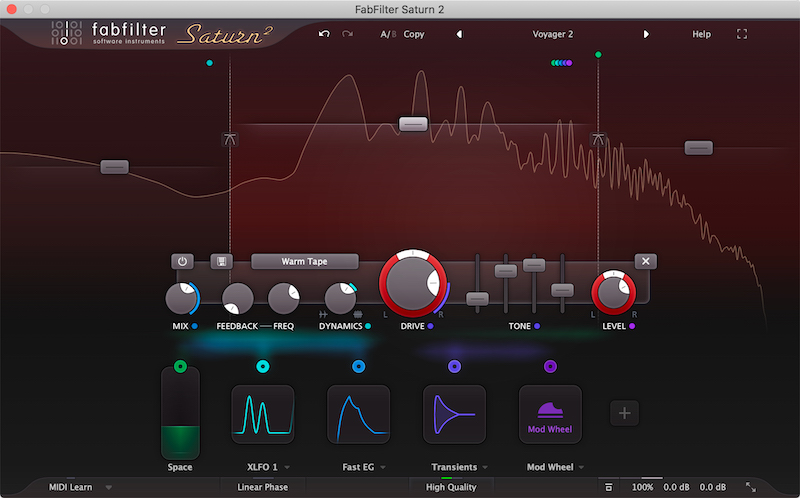 Saturn is one of the most versatile plugins on this list. It can do everything from super subtle harmonic enhancement to pure screaming destruction. As far as desert island plugins go, this would be at the top of the list in the saturation category.

Plus, its multi-band functionality allows you to create up to 6 saturation bands, each of which gives you access to its own dedicated feedback knob, drive knob, tone adjustment sliders, and mix knob. This means you can choose to saturate specific parts of the frequency spectrum — great for stuff like adding some harmonic richness to an 808, for example. 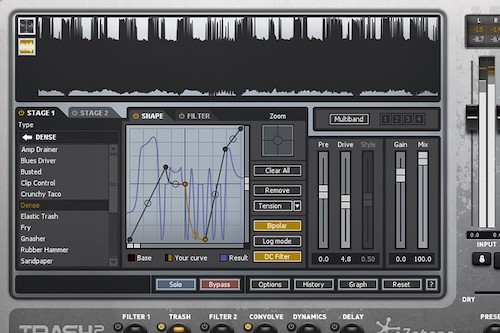 We all know iZotope makes great stuff, and Trash 2 is certainly no exception. We love FabFilter’s Saturn for its versatility, but Trash 2 takes it even further. For the actual distortion part, you can choose from any of 60 different algorithms for pretty much any flavor of saturation you’d like. From there you can choose up to four frequency bands to concentrate the saturation on, then shape the sound even further with different types of filters. The really cool part about Trash, though, is the built-in amp/cabinet modeler that lets you put any audio in a unique space. 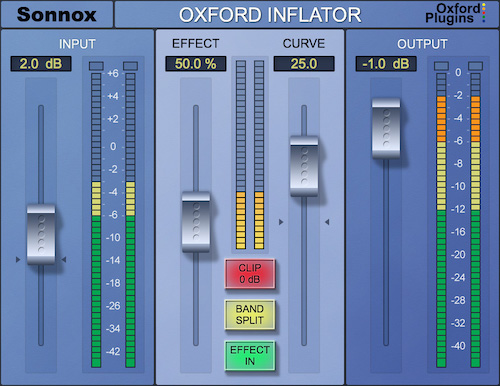 Inflator isn’t a saturation plugin per se, but it accomplishes a lot of what we love most about adding that bit of harmonic richness. It’s one of those rare ‘magical’ plugins that just does something amazing; like a mixing cheat code, and you’ll wonder how you ever mixed without it. Ultimately what Inflator does is allows you to make an instrument, group, or mix bus, sound louder without any of the negative effects of heavy limiting or compressing. If you hit it hard, it will introduce some tube saturation, which is why it’s a part of this list!

The Studer A800 tape machine is easily one of the most famous of all time. Everyone from Jeff Buckley to A Tribe Called Quest made records on this thing. The 900-pound beast was groundbreaking in more than just its heft, and UAD faithfully (like always) captured that magic in software form. As far as tape saturation goes, this is going to give you instant musicality and tone that digital recordings often lack. It can be quite subtle on a mix bus, or you can really drive it hard for natural tape saturation and compression.

Sausage Fattener by Dada Life is an underground classic. It’s funny in name and looks, and has a deceptively simple layout: two controls. Those are Fatness and Color, which together shape the amount of saturation as well as the overall frequency content and timbre. The Gain LED gives you a sense of how hard you’re driving the signal. Really, this is one of the best saturation plugins that just needs to be heard and played around with! 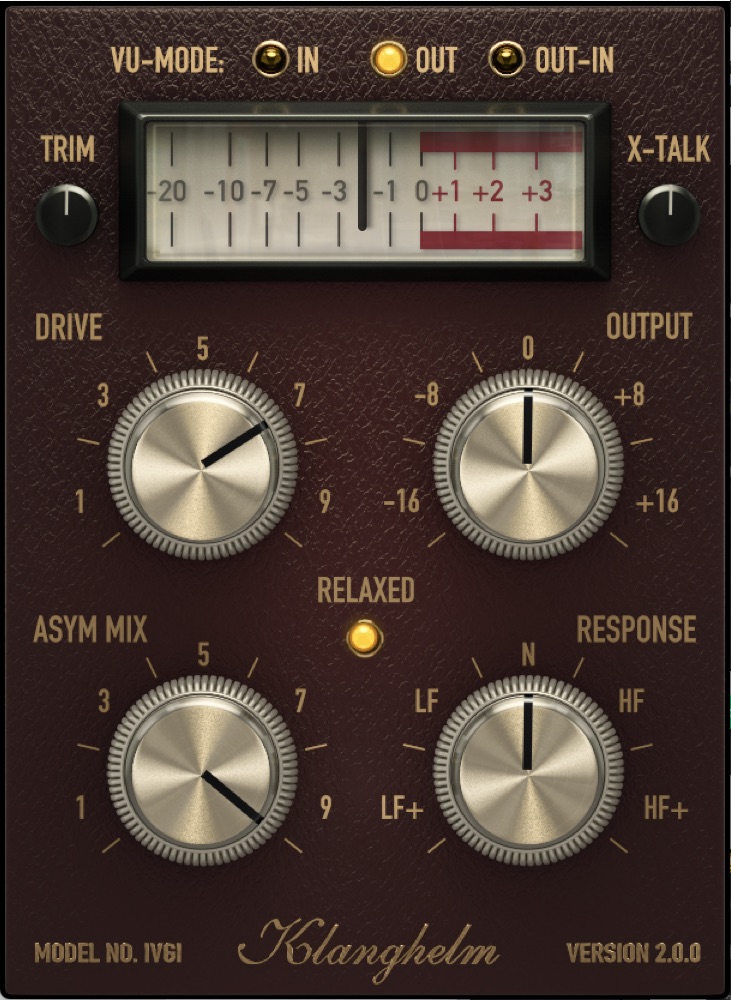 No list of the best saturation plugins would be complete without an excellent free option: Klanghelm IVGI!

IVGI can deliver very soft and subtle saturation, right at home on the mix bus. But it’s equally capable of very dense and dirty distortion effects to spice up single tracks.

IVGI reacts dynamically to the input signal. Even the modeled fluctuations react dynamically and also change depending on the drive setting, so that it doesn’t get in the way of the sound. Stereo tracks benefit from it’s modeled crosstalk behavior.

Additionally, IVGI features a Controlled Randomness, which determines the internal drift and variance inside the unit. It contributes to the liveliness and realness of IVGI’s saturation character. To achieve this, all internal processes are modulated to some extent. 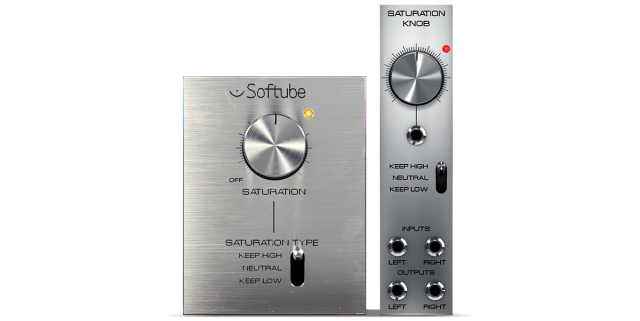 Saturation Knob is an awesome free plugin from Softube. It’s wickedly simple, offering three styles of saturation and a single knob to control the desired amount. Effortlessly fatten up drums, vocals, bass, or anything you can think of with it. Anyone can make use of this high-quality free saturation plugin for their mixes.

Saturation in mixing is essential to every mixer’s toolkit. You can instantly liven up any instrument by enhancing its harmonic richness. It’s also a go-to on mix buses, to beef up the overall perceived loudness and fullness of a song. Try it on everything; you won’t be disappointed!