Production duo Dada Life teamed up with Tailored Noise to release Sausage Fattener 10 years ago. Over time it’s become a cult classic in the plugin world, known both for its performance as well as its humorous name and interface. Don’t be fooled, though; Sausage Fattener is every bit as useful as it is quirky!

What does Sausage Fattener do?

Sausage Fattener is a go-to for many of the world’s top producers, including Tiësto, Kaskade, Diplo, Dirty South, Zedd, and of course its developers, Dada Life. So what’s all the fuss about?

It has just two knobs: Fatness and Color. The former adds weight to the signal—a bit of ‘oomph,’ size, saturation, compression. The latter gives a signal some brightness and edge, and control over the whole timbre. Finally, there’s a small Gain adjustment dial which can help set the balance between the two primary parameters.

The interface itself is dynamic, which means the sausage’s face reacts to how hard you’re driving the plugin. Pretty funny stuff! As a general starting point, Dada Life recommends setting the Gain first until the LED shows green, then playing with Fatness and Color to taste.

How to Use Sausage Fattener

Honestly, plugins can sometimes be too simple on paper; they need to be used to fully understand. Regardless, these are some typical ways you can apply it to your own productions, according to the plugin manual.

SEE ALSO: Use Saturation Effectively in Your Mixes 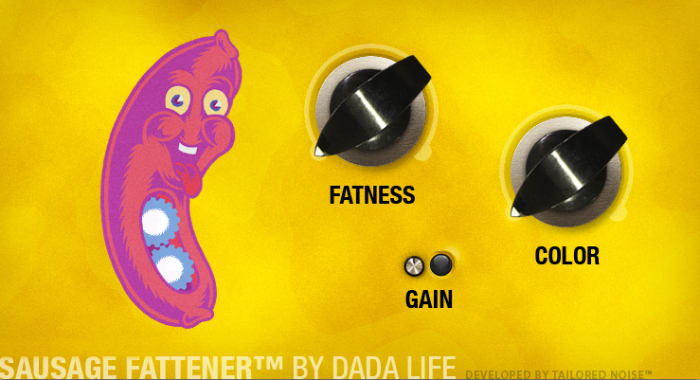 Sausage Fattener is the epitome of a plugin designed to be set by ear. The ambiguity of the controls force the issue, though you’ll be distracted by the goofy anthropomorphic sausage to see how it responds to your settings. While the main demographic is EDM producers, Sausage Fattener has enough variety to work on anything.

At subtle settings it works like a musical compressor; some folks have likened it to an LA-2A style of compression. From there, you can drive it all the way into crazy distortion, so the plugin fits right in on single tracks, instrument buses, or even across whole mixes.

Dada Life paired up with Tailored Noise, who analyzed their most-used effects chains, to come up with the production duo’s signature sound in one easy-to-use interface.