EZDrummer 2 vs Superior Drummer 3: Which Is Right for You?

Toontrack produces industry-leading virtual instruments and sample libraries, including two popular drum plugins: EZDrummer 2 and Superior Drummer 3. While both are powerful in their own right, they tend to serve different purposes depending on what you’re looking for in virtual drums. So, which is the best route for you?

When “Drumkit from Hell” came out in 1999, it raised the bar for sampled drums. Toontrack was then a two-man operation, and their flagship sample library was a passion project—two musicians who wanted better sounding drums for their own songwriting. Toontrack’s co-founders far exceeded their own expectations with Drumkit from Hell, which changed the entire course of the drum sample industry.

(Swedish metal giants Meshuggah released their 2005 full-length, Catch Thirtythree, using Drumkit from Hell on the whole record—a testament to how good those early samples were.)

Toontrack blew up, and they’ve continued to cement their reputation with instruments like EZDrummer and Superior Drummer. Their product line has also expanded to include bass, keys, and multi-effect mixing tools.

EZDrummer 2 vs. Superior Drummer 3: Which Is Right for You? 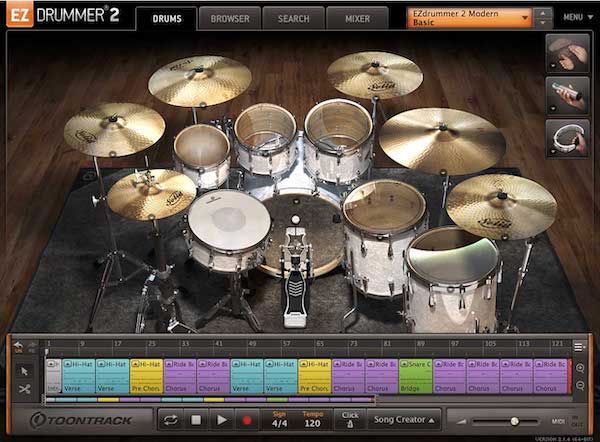 One thing should be made clear: EZDrummer and Superior Drummer are, in fact, two different instruments to serve different needs. They aren’t just rebranded versions of one another (thankfully!).

In short, EZDrummer 2 is perfect for songwriters and quick idea generation. This goes for the entire “EZ” line: Toontrack designed these instruments, including EZDrummer, to remove the technical barrier between creativity and execution. You can quickly lay out an entire mix-ready drum track thanks to its powerful and intuitive features.

Superior Drummer offers complete and total control over the drum programming process. The learning curve is much steeper, and there’s an overwhelming amount of parameters you can mess with. Superior Drummer is the total package. It has all of the features you’d want for programming ready-to-release drums.

One of EZDrummer’s best features is the Song Creator mode. As you start to drag and drop MIDI grooves, the “smart” software suggests the next best move based on the arrangement, and you can make edits as the beat comes together. One thing to keep in mind is that EZDrummer only offers a piano roll for editing, while Superior Drummer has a precise grid editor.

Superior Drummer is almost ridiculous in how much it offers. The whole concept behind it was to create a complete virtual drum recording studio. You start with the absolute best raw materials in the form of 230GB of samples recorded by the legendary George Massenburg. Then you can tweak virtually every parameter imaginable to bridge the gap between acoustic and software drums.

EZDrummer 2 weighs in at a modest 4GB compared to Superior Drummer’s whopping 230 (that’s no diss to EZDrummer, though!). Both plugins are expandable with a huge collection of different sample and MIDI packs to further refine the drum sound that’s best for you—EZX and SDX libraries, respectively.

Let’s say you start off on EZDrummer with a few EZX expansions and decide to upgrade to Superior Drummer later. You can use EZX libraries in SD3, and SDX libraries in EZD2.

By customization, we’re referring to the ability to manually shape the drum sound. Without question, Superior Drummer is, well, superior. The level of detail is crazy: change tunings, microphone bleed, mic positions, make adjustments to the room itself, etc., etc.

EZDrummer is a songwriting tool. It comes with awesome premixed sounds and presets to get you going fast. While there’s a bit of fussing about you can do yourself, that’s not really the idea with this instrument.

Many people will find themselves in need of both plugins. That is to say, if you start on EZD2 and want to make the leap to SD3 later on, you can. All of your EZD2 libraries will travel with you to the SD3, so there’s no reason you can’t enjoy both if you’d like. 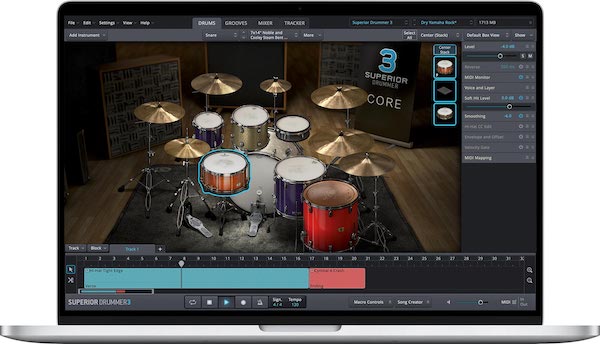 Go with EZDrummer 2 if you’re a songwriter and just want to be able to get ideas flowing quickly. The included grooves sound great, and you’ll get plenty of mileage out of this plugin if you don’t have complicated needs.

Go with Superior Drummer 3 if you want to settle in for the long-haul and manually program hyper-realistic virtual drums. It’ll take some time to get used to it, but once you’re familiar with the power in SD3, you likely won’t need another drum plugin for the foreseeable future.

Ready for the real thing? Check out the complete guide to Home Studio Drum Recording with Blair Sinta!