As part of Thomann’s Gearhead University 2019 in Treppendorf, Germany, we had the incredible opportunity to record drums in a castle which dates back to the 1700s!

Castle Reichmannsdorf was built in 1714 and is located near Bamberg in Upper Franconia. It has a stunning baroque façade with an equally opulent interior and carries over 300 years of history with it.

In 1642, a building known as the Truchsess Castle on the same property burned down. In 1714, Johann Dientzenhofer was hired to build a castle in its place; a three-wing building with a richly decorated face side, a tall mansard-divided roof, and a powerful crest gable.

Today, Reichmannsdorf is a hotel with an adjacent golf course, and overall an incredibly beautiful piece of German history!

All of the drum mics were recorded through Universal Audio Apollo x8p and Twin interfaces using the Helios Type 69 Unison preamp plugin.

We mic’ed the Ludwig kit with a combination of Sennheiser, AKG, and Neumann microphones! 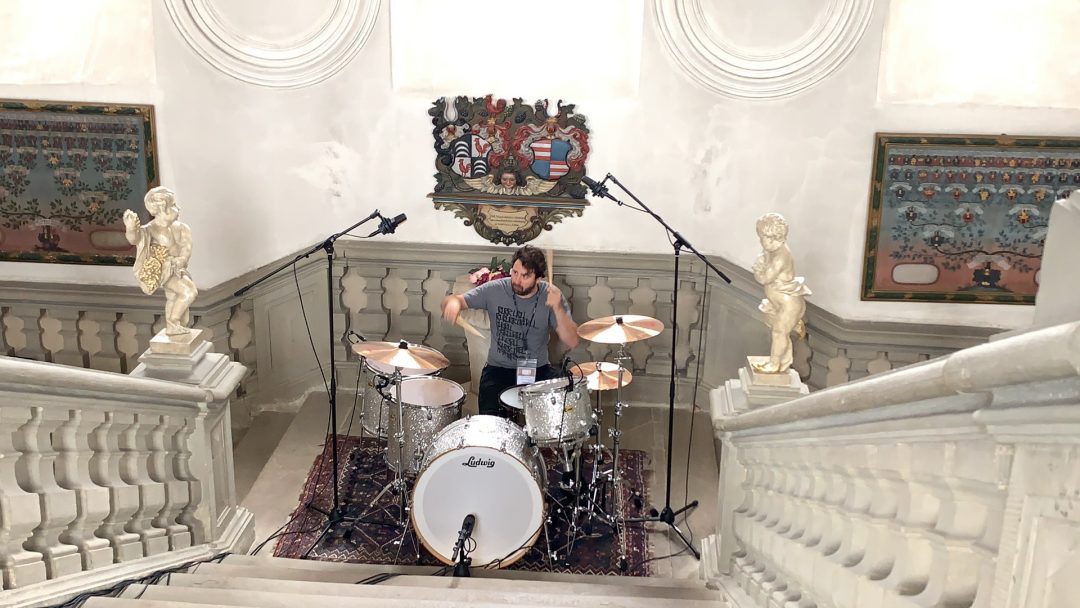 What all of the microphones in this series have in common, apart from incredible sound, is a defined purpose. We used three e 904 dynamic mics on toms, which are specifically designed for drums and percussion. They come with a convenient clip to easily attach straight onto toms or a snare and sound great!

The e 902 is a bass instrument mic, which we used on the kick. Sennheiser recommends it on bass guitar amps and even tubas as well.

The e 906 we used on the snare is a versatile super-cardioid dynamic microphone. It works wonderfully on drums, which we demonstrate here, but is great for guitar amplifiers too!

For the overheads we used a pair of 414 XLIIs. For the stereo room sound, we used another 414 XLII in figure-8 pattern. The main difference between the XLII and the XLS is the capsule. The former, which we used, has a presence boost slightly closer to that of the classic C12.

Our mono room mic was the Neumann TLM 49. It was designed to recreate the tube sound of Neumann’s iconic 1950s mics using more reliable and sturdy FET circuitry. It has the same capsule design as the U 47 and M 49. It’s often used a vocal mic, though we got incredible results as a mono room mic too!