Anytime you change the frequency content of a sound source with an equalizer, a tiny amount of phase ‘smear’ occurs. This is a normal result of latency being added to the signal whenever you alter the amplitude of specific frequency bands. Your run-of-the-mill EQ plugins and analogue emulations are susceptible to phase smearing, though it’s usually barely noticeable; sometimes it’s even part of a certain EQ’s sound. However, in digital audio, we have linear phase EQ to compensate for latency if necessary.

What is a linear phase EQ?

Standard software and hardware equalizers are also called minimum phase EQ. That’s basically to let us know that a very small amount of delay will occur whenever you play with the amplitude of different frequencies. This could create artifacts that don’t sound good, though most of the time you can’t even hear phase smearing. Still, there are certain instances where you may want to keep phase as consistent as possible.

Linear phase EQ is a byproduct of digital technology. Digital recording has made our lives a whole lot more convenient, but it’s still relatively new as far as recording history is concerned. For decades, people made records on consoles and tape machines, and that’s a sound people came to know. Part of what we do in-the-box is impart some of that analogue mojo back into a crystal clear digital recording via all sorts of analogue emulated plugins.

Linear phase EQ is not possible in the analogue domain. Sometimes that’s the beauty of digital (even though we still tend to chase ‘old’ sounds!). Linear phase is equalization that doesn’t affect the phase of a sound source. It keeps the relationship linear across the spectrum so you can boost and cut to heart’s content with no adverse side effects…well, sort of.

The whole point of linear phase EQ was to give engineers the option to avoid phase smearing altogether. As with most things in audio, however, there are tradeoffs. Pre-ringing is the biggest downside of using linear phase; the technology inside these EQs analyzes the frequency content, then shifts the processed audio to keep it in time. During this shift, you sometimes get an echo right before a big transient—this is called a pre-ring. It’s audible, and can affect transients pretty badly.

This begs the question: should you use linear phase EQs?

Why Use Linear Phase EQ

Just because this fancy digital stuff exists doesn’t mean you need to stop using regular equalizers. All those old Pultecs, SSLs, Neves, APIs, and more are literally the sound of thousands of recordings. Minimum phase EQ has been around forever, and it isn’t going anywhere anytime soon.

One of the main reasons why you’d want to use linear phase EQ is to preserve the phase relationship between multi-miked sound sources. Most commonly, that would be a drum kit, or a stereo miked instrument. Phase cancellation can be a serious problem, especially on drums, so once you’ve dialed in the balance with mic technique, perhaps some polarity inversion or what have you, you probably want to retain that balance as you go to EQ. Linear phase is perfect for that.

Parallel processing is another way to apply linear phase EQ. Sometimes you’ll duplicate a track and process the duplicate to create a parallel blend with the original signal. A linear phase EQ on the processed track could ensure the phase cohesion between them. The same goes for a parallel bus receiving multiple tracks.

Finally, maybe you’ve heard about it before and are wondering, ‘Why use linear phase EQ in mastering?’ That’s simply because phase smearing would be the most blatant when you’re processing an entire mix. Again, though, lots of mastering engineers like the color ‘regular’ EQs impart. Not everyone will reach for a linear phase EQ first, unless there’s some really nasty phase issues happening. 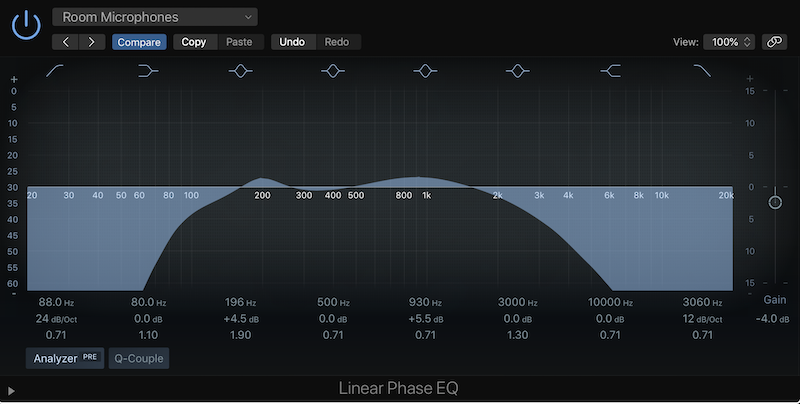 Logic comes with a stock Linear Phase plugin that looks almost identical to Channel Equalizer. The difference between them is that one is minimum phase like a standard equalizer, and the linear phase one is linear phase…ha! As we’ve learned, one isn’t necessarily better or worse than the other, it’s just that linear phase equalizers serve a very specific purpose. Channel EQ is still probably going to get way more use than Linear Phase!

Digital audio presents us with many tools that are impossible in the analogue world. They frequently meet an ultra-specific need when we actually don’t want to make something sound ‘analogue,’ like the desire to reduce phase smearing found in standard equalizers.

In all likelihood you’re not going to put away your favorite EQ plugins and reach for linear phase from now on. But, it’s good to understand that these tools exist to help us and make our mixes as great as possible!