We’re back with another episode of Mixing Basics. In this episode we’re going to mix Bass guitar!

This session is available for download so you can follow along with me! These multitracks are from Produce Like A Pro Academy, every single month we take a multitrack and we mix it.

There are a couple thousand people in the academy right now and not only are they sharing their mixing techniques on the 50+ academy multitracks but they’re also sharing their personal multitracks! – It’s rather wonderful in there so please come and join us in there.

Check out our previous episodes from the Mixing basics series below. 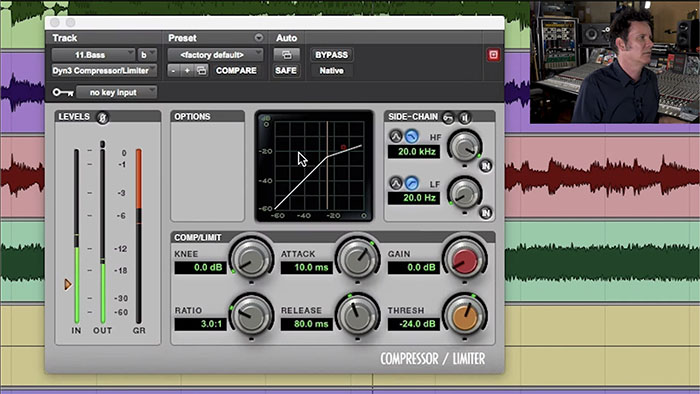 Today’s episode is quite a simple one but I’m going to show you a couple of different approaches that I take when mixing bass. This song is one that you’ve heard me use a couple of times before but there is a bass DI in it. – A bass guitar plugged straight into the front of the interface.

In areas the bass gets super loud and then it disappears, so its dynamic range is massive. That is very typical of most bass guitar performances. It could be a younger artist who is a little hesitant in their performance or it could just be the characteristic of playing with a pick. – The bass player is using a pick in this track.

Sometimes when you play with a pick and you hit it super hard it could fret out, this could even happen while using your fingers. Then you get the opposite when you hit it super soft and the low-end blooms. – Either way, it is an inconsistency in the performance.

So what do we do?

We’re going to take the bass and duplicate it, even though it’s just a single DI we are going to duplicate it. – Whatever DAW you use just duplicate everything about it.

Now we have exactly the same thing duplicated, take the Di and have a listen. One of the great things about a DI over an amp sound is it has more of the exact personality of the bass.

There is no distortion from a amplifier like a tube amp, there is no speaker coloration, It’s the purest signal you can get. Just the bass plugged into a DI box, In this instance, it’s plugged into the front of an Audient ID 44.

You can immediately see that everything above 1000Hz has been wiped off, so we’re going to bring that down to about 200Hz. You can hear that it is all the low end left, but it still is a little inconsistent.

Without getting any fancy plugins, which there are plenty, we’re going to stay stock so that you can use the equivalent in your DAW.