It saddens me that this last Tuesday, October 6th 2020, he passed away. I wanted to talk about what Eddie meant to me because of how impactful he has been throughout his life to not only the music industry but to me especially.

As a little kid, before I learned to play guitar, my dad gave me a guitar. I was so excited and wanted to learn right away. I remember that I would go to this guy’s house, Niel Louis, and he played guitar. The first thing he put on was Van Halen 1, Eddie’s first album. He played the album and I was in shock. At the time I had no idea what I was hearing, it was alien to me. Eruption, any guitar solo that Eddie performed on that first album was a whole new experience, it was indescribable. The riffs, the solos, it was all creative genius.

In my eyes, Eddie created ‘shredding.’ He took what I saw from all the best skills from every guitarist I knew growing up, Allan Holdsworth, Brian May, Steve Hackett, and put it all together. When Eddie did what these other legends have done, it was absolutely nuts.

At the time people thought Eddie’s tapping was a keyboard, but the album didn’t say any keyboard parts, it only said guitar played by Eddie Van Halen. It was such a huge deal. That first record Eddie put out just blew my mind.

When I was 15, I started really getting into playing the guitar, which was a few years later. Because of Eddie, I already had that inspiration inside me. At the time I was really into Hendricks, Jeff Beck’s Blow By Blow, all this stuff but there were 2 people that I just couldn’t get enough of – Bryan May and Eddie Van Halen.

To me Eddie was the perfect modern guitar player, he had it all. He could do something no one else could. He had the ability to pull up the blues with so much feeling, emotion, and groove, while shredding with the same kind of energy and in your face “middle-fingerness.” Eddie found patterns that were so exciting.

Seeing Eddie play live was so exciting. His performances weren’t just melodies and harmonies. They had rhythm, excitement, rock and roll, pyro-technics, everything he did was amazing.

I remember being very very blessed to have been able to attend a production rehearsal at the Staples Center. My wife and I went and we could go anywhere, so we went right to the front of the arena! Eddie played Eruption at twice the speed with way more stuff going on. It was insane. He did all these crazy guitar riffs and my wife looks at me as I’m bawling my eyes out. Tears running down my face, I thought to myself and told my wife in that moment “you will never ever, in your whole life, see something as amazing as this ever again.” It was one of the most incredible guitar performances ever played, and until my dying day, I will believe that.

My personal experiences with Eddie Van Halen were always unbelievable. Some of you might have seen the photo I posted of a guitar I got from him that he signed to my son. He wrote, “To Charlie, play it loud and make your dad crazy ~love Eddie Van Halen.” 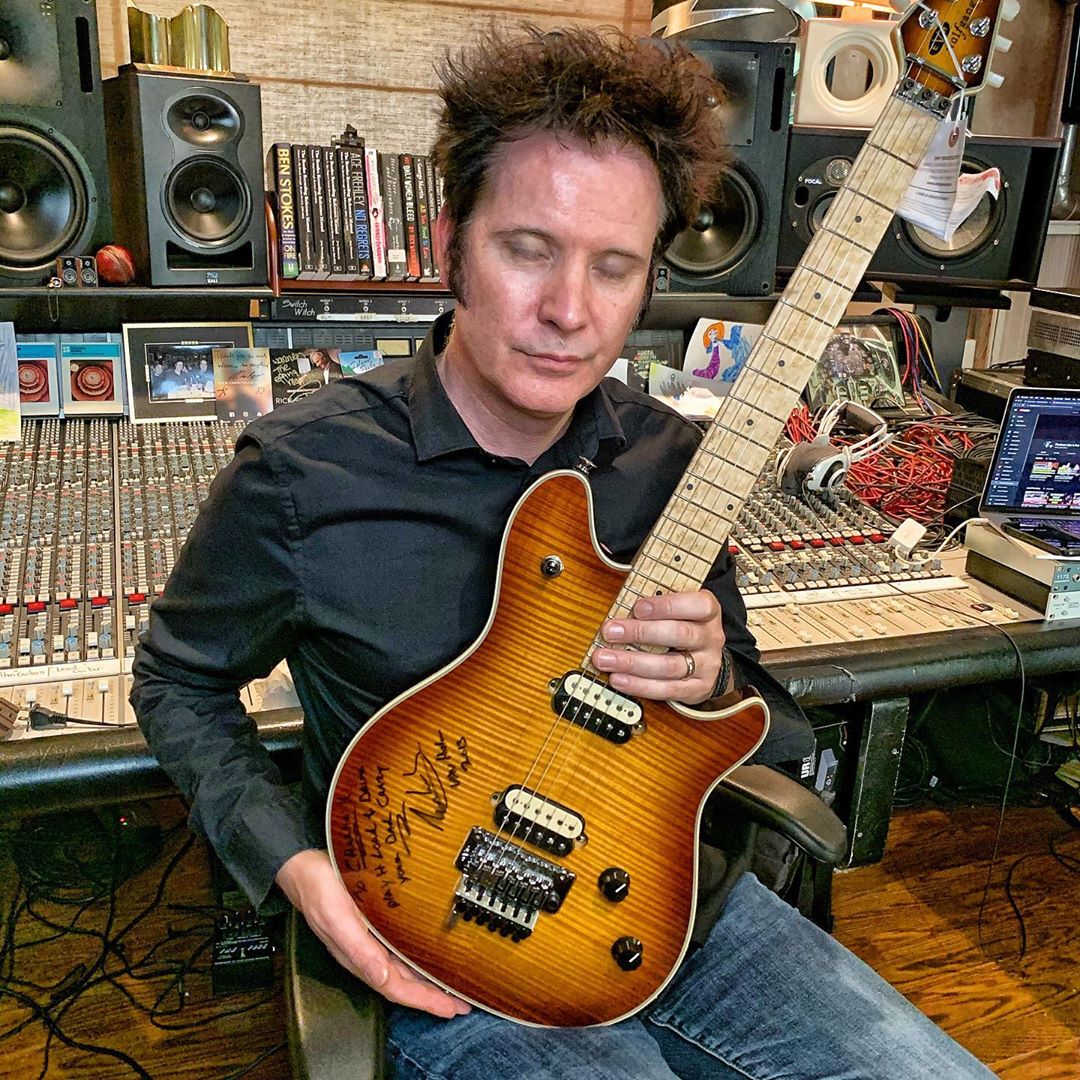 I have one more story about Eddie that I love to tell. I was talking with an artist that was bouncing between studios, producers not too long after finishing an album and the phone rings, it was Eddie. A part of me knew he was going to call, and he started asking me about the guitar sounds I recorded and the pedals I use. He wanted to know how I was making the sounds, which combinations I was using, and it’s just amazing to me how invested he was in recreating the sounds. When I told him that I used some plug-ins, he said to me “Ah plugins, I don’t use Pro Tools, I use everything to the tape.” I just remember absolutely loving that. The artist I was working with, Marc Broussard, asked me who it was. When I told him it was Eddie, he seemed pretty surprised. So thanks Eddie, you got me that gig.

It just shows how impactful and well-known Eddie is. On every single level, playing, performing, his personality, he was just such an exciting person. There’s no stopping point for someone as important as Eddie Van Halen.

Eddie passed at 65 years old, he was so young by today’s standard age. The average life expectancy now is like 83? He died 20 years too soon. The last time he was playing live, he was absolutely amazing. You and I both know he had so much more left in him. For all of us, Eddie has changed music forever and I am humbled to have learned from Eddie.

If you have your own stories of Eddie, I’d love to read them in the comments below.