An audio interface is one of the first things you’ll buy for your home studio. Typically two inputs are enough for the majority of home recordings, and there are tons of affordable entry-level interfaces. In terms of PreSonus vs Focusrite, both companies offer comparable choices that we’ll explore further today. 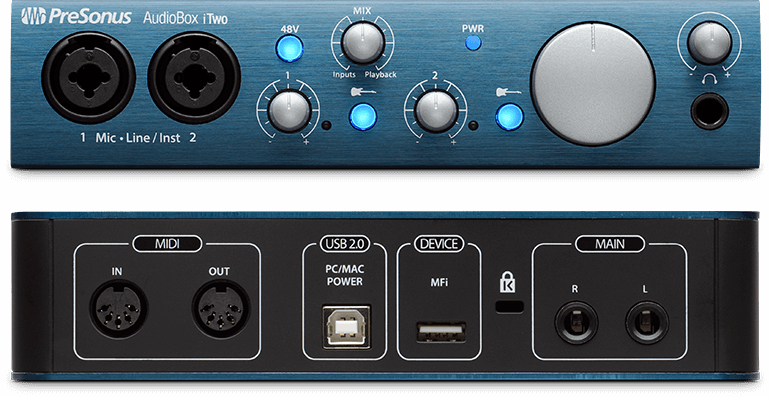 PreSonus calls their AudioBox iTwo interface the perfect choice for mobile producers. It’s easy to throw in a backpack, sure; any interface with barebones I/O is. But don’t be deterred by the somewhat confusing ‘mobile’ branding; an interface like this is equally at-home as a permanent desktop fixture. Regardless of whether you’re setting up a home studio or piecing together a to-go rig, PreSonus’s AudioBox is a quality interface.

The PreSonus AudioBox iTwo USB Audio Interface is about as simple as it gets. On the front you have two Mic/Line preamps with switchable phantom power. Plug in a microphone, or go direct with an instrument cable from a guitar, bass, or keyboard. A unique feature to PreSonus interfaces is the Mix control that lets you blend in the desired amount of Input versus Playback signal. This is very handy for overdubs, when you may want to hear more or less of the backing track compared to your voice/instrument. Next you’ll find a large monitor control knob, and finally a headphone output with independent level control.

On the backside of the AudioBox are two 1/4″ outputs for monitors, as well as a 1×1 MIDI in and out for compatible devices. This interface runs on USB 2.0 bus power—no external power required. Pretty straightforward, right? There really isn’t much to entry-level interfaces like these, as they’re primarily designed to be utilitarian. And the PreSonus AudioBox iTwo certainly meets that mark.

The main thing to consider with cheaper interfaces is the preamp and converter quality. Across the board, USB interfaces have gotten so good in recent years that you almost can’t go wrong with any of them. PreSonus has won awards for their preamps in the past, and they’ve fitted two of them in this AudioBox. Also, the 24-bit/96 kHz converters are about as good as anything else out there.

Finally, PreSonus bundles the AudioBox iTwo with a suite of software and effects worth around $1000. This includes Ableton Lite, virtual instruments, plugins, and more. That way a simple purchase of an interface actually gets you a complete digital recording studio from the get-go. Again, this is common practice in the entry-level interface world and not strictly unique to PreSonus. That said, the AudioBox is a great interface overall and certainly wouldn’t be a poor choice for anyone shopping for their first piece of studio gear.

As far as PreSonus vs Focusrite goes, the former has some serious competition. Let’s have a look!

Focusrite nailed it with the Scarlett 2i2; that’s obvious to anyone who’s ever read an article like this or researched audio interfaces before! Focusrite says their ubiquitous interface has “gone platinum” and “helped make more records than any other interface in history.” That’s debatable, but certainly plausible, as the little red box is impossible to avoid. It seems like the be-all, end-all of affordable interfaces…

Like the PreSonus, Focusrite’s Scarlett 2i2 features two Mic/Line inputs with phantom power; a larger monitor control knob; and a headphone output with independent level control. On the back, you get a simple pair of 1/4″ outputs for monitors—nothing more, nothing less.

Unique to the Scarlett is the Air control, which is switchable on/off for either preamp. The Air function mimics the sound of classic Focusrite ISA preamps for an additional touch of top-end sheen that sounds “expensive.” Like the AudioBox, the 3rd generation Scarlett’s preamps and converters are top-of-the-line at this price point. The latter support samples rates up to 192 kHz, and the mic preamps are as loud and clean as they get.

The USB connection on the back of the interface is of the “C” variety, but that doesn’t mean you need USB-C ports on your computer to connect it. You can run a USB-C to USB-A cable to bus power the Scarlett 2i2. Also like PreSonus, Focusrite packages the interface with a large suite of software, including Ableton Lite, Pro Tools First with a loop pack, a few Softube plugins, and more.

Presonus vs Focusrite, then—emphasis on the versus. What sets these two competitors apart?

One of the things you’ll notice right away between PreSonus vs Focusrite is that the former has a couple more features. MIDI I/O on the AudioBox may be attractive to some users, as well as the Mix knob—a handy, but not essential, feature. Conversion and preamp quality is a tossup; both Focusrite and PreSonus have won awards for their preamps. PreSonus only goes up to 96 kHz while Focusrite runs all the way to 192, but realistically, it’s incredibly unlikely the average home studio enthusiast will need to record that high.

Price is the same, so nothing much to say about that. The deciding factor on PreSonus vs Focusrite entry-level interfaces, apart from I/O, may very well be the Scarlett’s Air function. If you want to get a little more character out of your recordings without investing in expensive outboard preamps, that simple feature alone might be the decision-maker.