Best Way to Get PULTEC EQ in Your Home Studio

The Pultec EQ is one of the most revered pieces of analogue equipment ever made. Any mention of it is usually followed by some form of the words ‘magic’ and ‘musical,’ and it’s been a standard piece of studio equipment for over 60 years.

The first Pultec (EQP-1) came out in the early 1950s. Pulse Techniques founders Ollie Summerlin and Gene Shenk hand-built every unit themselves until the company closed its doors in 1981.

That was until the early 2000s when Dr. Steve Jackson, electrical engineer and materials scientist, spent the better part of a decade meticulously researching each original component to its precise specification. Thanks to detailed conversations with Gene Shenk himself, Jackson ushered Pultec into the 21st century.

People loved the EQP-1 upon release, probably because it was the first passive program equalizer ever. Radio stations initially adopted the Pultec because it would “add that ‘final touch’ to the balance of good program material.” It could also be used “to greatly improve the quality of program material previously recorded on equipment of inferior quality.” (Quotes are from the original Pultec manual!)

The Pultec EQP-1 is a passive all-tube equalizer with an amp circuit. The amp restores the level that is reduced when a signal is fed into the unit. This basically means that the level remains the same regardless of whether the EQ is switched in or out.

First, this is useful for comparing an unprocessed signal to an equalized one since there’s no false sense of something being better because it’s louder.

Second, it means the unit, by design, lowers the level and then boosts it again with tubes. Tubes add harmonic distortion, depth, and richness we associate with incredible sounding equipment. This is most certainly part of the ‘magic’ of the Pultec EQ. Even with the EQ off, the Pultec adds something great.

The low-frequency section of the EQP-1 is a shelving EQ with both boost and cut at four selectable frequencies: 20, 30, 60 and 100 Hz. The high-frequency section is a bell EQ with both boost and cut at seven center frequencies: 3, 4, 5, 8, 10, 12, and 16 kHz. The Bandwidth can also be adjusted from sharp to broad. The high frequencies can then additionally be cut at 5, 10, and 20 kHz using a shelving EQ.

The original manual for the EQP-1 says you shouldn’t boost and cut the same frequency. It’s funny that that’s been the go-to trick for decades now. As a result of experimenting with the legendary Pultec EQ, engineers discovered that something unique happens when you dial in the boost and cut at the same time.

The boost has more gain than the attenuation has cut, and the two controls work on slightly different frequencies. Engineers find it hard to describe exactly what it does—the magic is best heard yourself. On the low end, it adds body to the selected frequency without any muddiness. You can get that fullness without any compromise in clarity, which is extremely desirable.

Pultec Magic in Your Home Studio

Original Pulse Techniques EQs are hard to come by. They were built so well that they tend to work forever, and they sound so good that no one wants to part with them. And if you do find one, they regularly go for $10,000+!

Though the company closed in the early ’80s, Pulse Techniques was revitalized by electrical engineer Steve Jackson starting in the early 2000s. He made it his personal mission to faithfully recreate the original Pultec EQP-1, which he did successfully. He’s since expanded the Pulse Techniques line to include the MEQ-5 midrange EQ, 500-series modules, a full line of mastering EQs, and more.

Steve Jackson’s Pultec EQs are indeed the ‘real deal’—not just clones. But because of that, they’re very expensive. The current Pultec EQP-1A is $4000; double that for a stereo pair. The best way to get Pultec EQ in your home studio is through plugins!

UAD plugins are regarded for being some of the best analogue emulations currently available. They go into painstaking detail to bring old school magic into the digital realm, and the Pultec Passive EQ collection is a testament to that.

The collection includes models of the iconic EQP-1A, the MEQ-5, and the HLF-3C filter. As with all UAD plugins, however, you need dedicated hardware to run them, like one of their interfaces or satellites. It’s worth it, because Universal Audio makes some of the top plugins on the market.

Also, if you do purchase their hardware, you’ll get the Pultec Pro Legacy plugin for free, which is the MEQ-5 and EQP-1A in a single plugin.

Waves modeled Jack Joseph Puig’s own Pultec EQP-1A and MEQ-5 to develop the ‘PuigTec‘ plugins. You’ll find they’re almost identical to the hardware, but with an added gain control as well as a VU meter.

The PuigTec EQ’s are super affordable, making them the perfect introduction to high-quality Pultec style EQ in your home studio. They can regularly be had on sale for 1/10th the price of the UAD emulations.

Plugin developer Softube has a close working relationship with hardware producers Tube-Tech. They’ve collaborated on two of Tube-Tech’s applauded designs: the CL 1B compressor, and their Pultec clones, the PE 1C (EQP-1A) and ME 1B (MEQ-5).

Softube combines both Pultec style EQs into a single, easy-to-use plugin. The layout should be familiar! 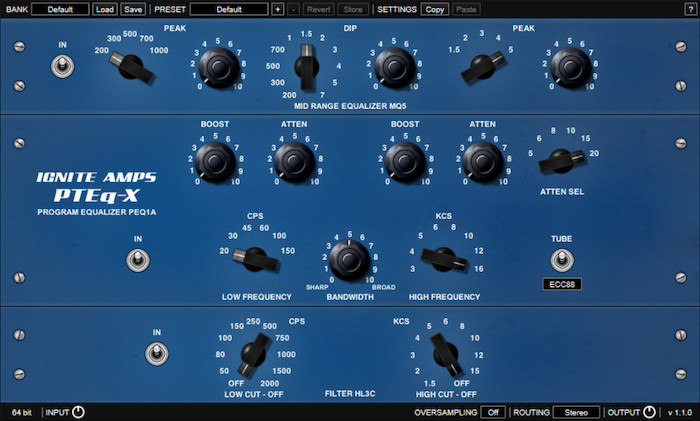 This Pultec EQ plugin is free! Reminiscent of UAD’s Passive EQ Collection, Ignite includes the HLF-3C filter alongside the EQP-1A and MEQ-5. Naturally, everything is modeled right off the OG hardware, so you can get a feel for Pultec style EQ for free to see if it suits your tastes and workflow.