We are very excited get an exclusive first look at a brand new product from Rupert Neve Designs today! The Rupert Neve Designs Master Bus Converter Dual-path A/D Converter & Limiter is a 2-bus converter with a fully functioning limiter in it, and loads of transformer options to give you a huge, fat analog sound.

This was designed by Rupert Neve himself, and I know he and his team have put a ton of effort into making something that is best in class, so let’s see what it can do!

Rupert Neve is very well-known and create tons of amazing equipment, but what he is perhaps most known for is his transformers. Having this transformer in here is what is going to give you that signature “Neve” sound.

I am also really excited to hear the limiter because, to me, that is going to be a defining thing because I want all of the Rupert Neve sound, but to add some really good limiting in there as well is going to really help push us over the edge. In a world where we are trying to get competitive, printing with a limiter on a 2-bus digital interface could be very, very good. Having a limiter is going to help you compete with anything done inside the box.

Check out the video below to see this amazing piece of equipment in action!

In an audio landscape where things are continually moving further inside the box, many of us are craving some tactile interaction with our mixes – not to mention some analog flavor. To help us along, Rupert Neve Designs has created a cousin to their celebrated “MBP.” Please help me welcome the Master Buss Converter, or “MBC,” into the world!

The MBC is an analog stereo limiter, leading to a stereo analog-to-digital converter. From the limiter, the audio can take two switchable paths: a transformerless, more transparent one; or a path that includes a custom Rupert Neve transformer with optional red and blue “Silk” modes. Additionally, the left and right channels can be operated in dual-mono with complete independence, allowing it to be the final stage of your tracking rig as well.

Now that I’ve introduced the signal path in order, let’s start from the end and work our way back… 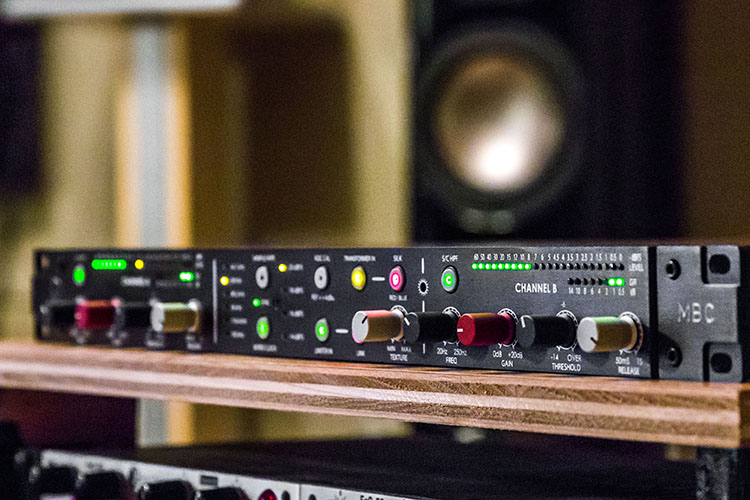 My first test for the MBC was to bypass all its fancy features and listen to the conversion quality alone. And let me tell you, it did not disappoint! It’s definitely not transparent, but who would buy a Rupert Neve product hoping that it wouldn’t have a sound?! Even when used solely as an ADC, it adds color. The high-mids – especially in the 2 – 6 kHz range – are forward, reminiscent of the Apogee AD-16x, but with more clarity. There is a real emphasis from 60 – 180 Hz, which can make the attack of a kick drum feel like a punch in the chest! However, the deeper lows start to roll off below 40 Hz, which was pronounced on hip-hop and doom-metal tracks. Above 12 kHz, the highs are also slightly curbed, but I found this to be pleasant and smooth sounding. The phantom center is very nicely anchored. Eyes closed, a center-panned vocalist felt about three feet directly in front of my face. Conversely, the overall soundstage was a bit narrow compared to the two ADCs I put it up against.

It’s a Rupert Neve transformer; it sounds great! It really adds mojo, even without “Silk” engaged. The Silk circuit is a ton of fun to play with. The red version of Silk adds some grit and emphasis to the highs. I was able to make a track with an irritating noise floor sound more “tapey” and intentionally lo-fi. The blue Silk adds some warmth and heaviness from 200 – 500 Hz, I’d estimate. I loved it on a psychedelic rock track. I had it way up around 65% saturation and was still enjoying the impact.

As you introduce these different features into the signal path, it’d be wise to edge your monitoring level down. Each button adds a tiny bit of loudness, and it’s easy to let your ears be seduced by it. Listening back to the same track captured with a variety of MBC settings (none of which involved the unit’s gain knobs,) I had to make minor adjustments to my DAW’s playback faders to create an objective comparison with the ADC-only path. Once the tracks were properly level-matched, it was easy to hear where the added loudness had tricked me into over-Silking, so be mindful of that in your tweaks. 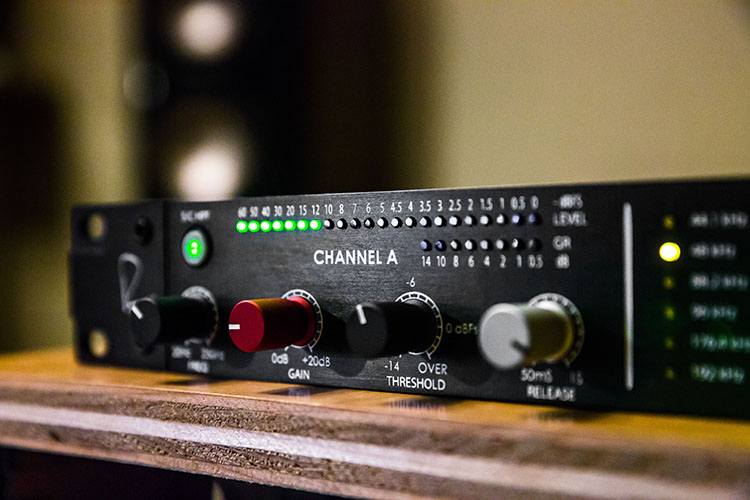 Whether you’re tracking or mixing, you will be psyched on this limiter. It’s a 10:1 fixed-ratio limiter. The product specs don’t list the attack time, but it’s damn near instant. I compared it to my API 2500 hardware buss compressor at 10:1, with its fastest attack (.03 milliseconds,) and matched the gain reduction and release time I had dialed in on the MBC. The difference was plain to see in the captured waveforms. This Rupert Neve limiter is fast and powerful. Use it with caution! Even at a .03 millisecond attack, the API was letting the initial kick and snare transients through. The MBC was not. With ≤ 2dB of gain reduction, the MBC can really tighten up the feel of a track, and sounds punchy as hell! When the 4 dB gain reduction LED starts lighting up, a good mix begins to sound squashed. That being said, this more aggressive limiting could be excellent in tracking. 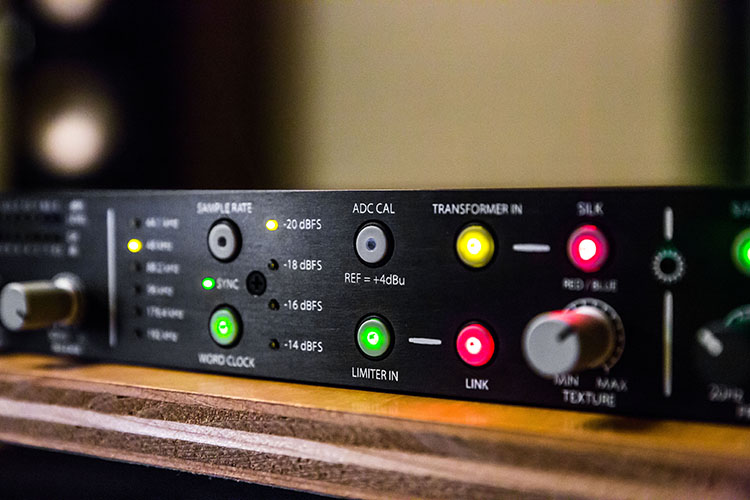 The Rupert Neve Designs MBC is a box with a learning curve, simply because of the wealth of features they’ve packed in. I spent two full workdays subjecting it to every manner of sonic abuse that I could think of, fully aware that I was just scratching the surface, in terms of “getting it.” It could take a few months to discover and have quick recall of the sweet spots for different applications. Once a user gets truly comfortable with it, I can only imagine how powerful a tool it has the potential to be!

The limiter’s controls, specifically the labeling, could be catered more towards the control freaks among us. For instance, the side-chain high-pass filter – which allows you to temper the limiter’s response to low frequencies – has no markings between 20 and 250 Hz. The limiter’s release time has no markings between 50mS and 1S. It’s understandable, considering that such enormously dense processing is packed onto a 1U faceplate that’s already heavy on text, but even one more reference marking on each of those dials would be helpful.

The limiter’s gain knob is exactly what you’d want it to be, especially when the source material isn’t already super hot. It’s not makeup gain, it’s pre-limiter gain, allowing you to chill the threshold out and drive the audio harder through the unit’s entire signal path without over-limiting. On a mix peaking around -5 dBFS, it was easy to add a ton of vibe and harmonic character without creating a brick. 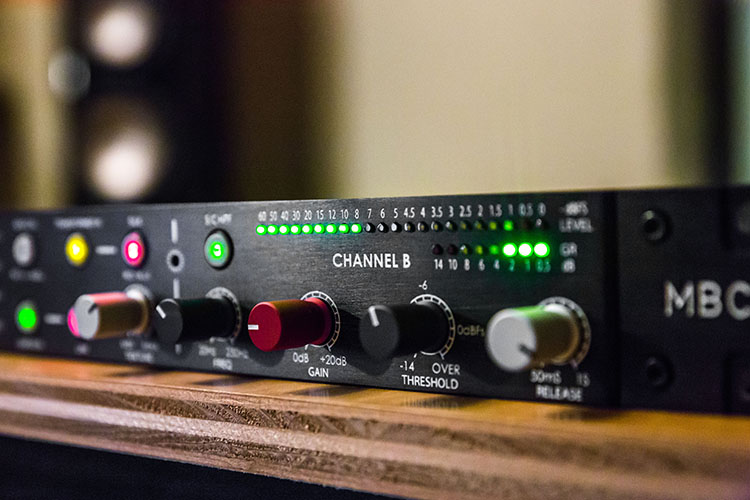 If you already love the sonic signature and aesthetic of Rupert Neve Designs gear, the MBC will be no exception. It’s a bit pricey, at $3,999 with no digital-to-analog conversion, but the possible combinations of its knobs and buttons are seemingly endless. In mix rooms that specialize in R&B, rock n’ roll, or country music; the Master Buss Converter could very well be a game-changer.