We go way back with Arturia – starting with Analog Factory, then upgrading to Analog Lab, and even venturing into the plugin world with the 3 Compressors You’ll Actually Use bundle. There is no doubt that the V Collection is the one-stop-shop for digital recreations of some of the most beloved analog synths. Version 7.2 arrives with new additions and upgrades, so we give you the scoop on what’s new, what’s changed, and what we think.

If you’re not familiar with the V Collection, it’s an assortment of 24 different software recreations of some of the most historic keys ever made. These hand-picked choices represent the past, present, and future of music. Odds are, whether you realized it or not, you’ve heard most of these synthesizers in your lifetime, possibly even the last song you’ve heard. Instead of having to spend tens to hundreds of thousands of dollars in finding, purchasing, and restoring the hardware counterparts, Arturia modeled each one, saving you time, money, and studio real estate.

Going through every single soft-synth in this collection would take far too long, so we will mainly cover what’s new in Version 7. If you’d like a more in-depth look at each model, please visit Arturia’s website (link HERE) for videos, tutorials, and specifics on each model in V Collection. We encourage this solely just to see the sheer value-for-money you are getting when purchasing the entire collection.

Thankfully, Arturia has improved the ASC Arturia Software Center. Installs and authorizations are a breeze. Once installed, Arturia has included the option of a tutorial for every virtual instrument in the collection. This helper is great for beginners and pro’s alike. By the end of the tutorial, you are on your way to editing and creatingyour unique patches.

On top of upgrading Analog Lab to version 4, V Collection has hit the ground running with three new synths along with a complete overhaul of their legendary Hammond B-3 recreation. On top of the latest additions of classic keyboards, V Collection also features Synthopedia, a collection of 800 of the most meticulously created presets from V Collection instruments. Some of the heaviest hitters in modern sound design created this library, and it shows. Synthopedia is locked and loaded for chart-topping tracks.

In the ’60s, the technology to replay sample libraries was a mere pipe dream. Then came the Mellotron, one of the earliest sample-based synths that utilized a tape machine to replay recorded samples to each key. In all honesty, this was and still is a genius approach to sampling. Part of the magic of the sound of this synth is the actual limitations and quirks of the unit. Tapes would warp, the mechanics would wear, and I’m sure musicians at the time were slightly annoyed at the inconsistency between the very same models. What they didn’t realize is that all of these annoyances and kinks shaped an era of music.

Now, thanks to technology, this machine can be modeled, and the quirks completely controllable. Arturia has pulled the curtain back on the Mellotron, allowing for each nuance of the device to be tweaked. Parameters like Flutter, Tape Saturation, Mechanical Noise, Noise Floor, Velocity, Volume, and even Aftertouch on Flutter can be adjusted to taste. On top of access to the top lid, an effects pedal board is available with added EQ, Effects, and Amp Simulators.

Arturia’s version also features 65 original tape racks from the MKI, MKII, M300, and M400 Mellotrons to add that Beatles sound to your songs. If you want to push the boundaries, up to three tracks of tape racks can be combined with the ability to add your personal collection of samples.

What started as competition to the hugely popular Yamaha DX7, quickly climbed to the top of the charts in the ’80s, making this unique cost-efficient alternative, a mainstay in pop music. Utilizing Casio’s “Phase Distortion,” this easy-to-use synth produced a sound that defined an era.

Arturia has faithfully modeled this synth, all while removing the shackles of old technology and adding a few tricks of their own. One of the more unique abilities in CZ V is that patches from old CZ series synths can be imported, giving you more control over those presets you saved back in the day. On top of preset import, CZ V gives four times the polyphony than the original unit along with a more useable modulation matrix. 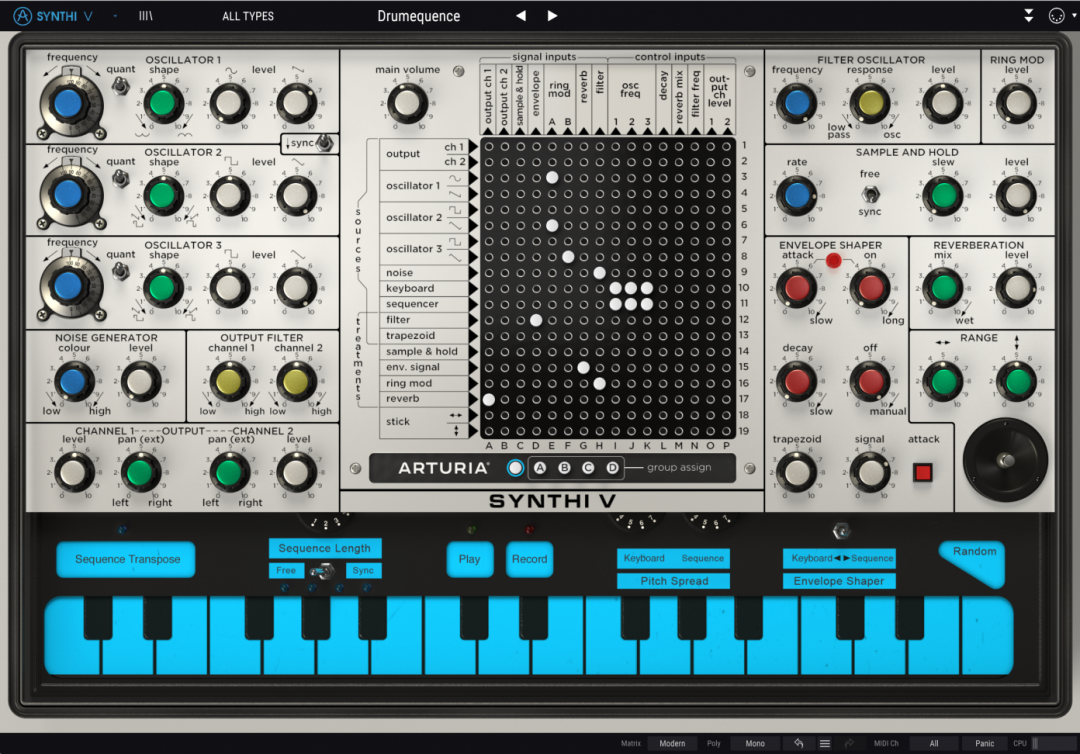 The Synthi was among the first in many respects. It took the modular synthesis that was very popular in the ’70s and made it portable, all without sacrificing function. It was also one of the firsts to utilize a matrix patch bay. This monophonic synth has graced the tracks of many experimental albums, including the Dark Side of the Moon.

Of course, Arturia has supercharged the synth, all while retaining the original edge and girth of the hardware counterpart. The Synthi V has added four more voices to the hardware version of the mono synth, a step sequencer, dedicated beat-syncable LFO, and onboard effects. The modulation matrix makes for never-before-heard patches due to the limitless possibilities of routing any signal into any other.

We all know the B-3. This electronic organ has weathered years of genre changes, all while still being a featured player in the game. While the B-3 has been a part of past V-Collections, Arturia has entirely gutted the virtual unit, rebuilding the sound engine even further to mimic its hardware sibling. This model features physical modeling and does not use samples.

Arturia has added their usual touch of magic along with outboard effects, tonewheel leakage, preamp drive, and traditional Leslie performance controls. You can even control more advanced parameters like key click. The added modulation section can automate the movement of the drawbars via a bevy of envelopes, oscillators, and step sequencers.

As Arturia continued to create software versions of famous hardware synths, Analog Factory was created as a showcase of their favorite presets. This all-in-one solution gave users a taste of what the entire collection was capable of, along with easy to use controls and presets. This software was also a companion piece to their beautiful USB keyboard controller. As time went on, Analog Factory grew up and became Analog Laboratory, further pushing the bounds of the original software.

Now version 4 is stockpiled with even more valuable features for novices and pros alike. What version 4 adds is a live “Concert” panel that can store multiple “songs,” each with a series of presets for each song. Once the set is determined, a “Stage” mode is available, giving you just to parameters needed during a performance.

To complement the new modes, ten effects modules are available to process sounds outside of the synth in use. Preset discovery has also become more accessible with machine learning, further expanding the already intuitively organized sections. If the 6500 presets aren’t enough, Analog Lab now has a store, where you can buy new preset packs.

On top of having easy to use controls at the heart of Analog Lab 4, owners of V Collection can click on each preset’s middle section to open up the particular synth (or synths) used in the patch from the Analog Lab window. Presets can be tweaked, then switched back to the simplistic mode of Analog Lab’s GUI.

If the already packed presets of each synth along with Analog Lab 4 isn’t enough, Arturia has added another bonus with Synthopedia. This collection of presets is unique in that it is carefully crafted by some of the best sound designers in the industry. While you can buy this collection for $99, it comes free in V Collection. Synthopedia breaks down to about 800 presets spanning 12 of the synths in V Collection. Once you load Synthopedia, it shows up as its area of your presets for applicable synth models. Arturia claim the creators of these new sounds don’t just have their finger on the pulse of what’s hot in music; they are the heartbeat.

I can’t say enough great things about V Collection. Not only does it span the gamut of analog synths, but it also expands each to immense proportions along the way. Beautiful interfaces and intuitive controls are a theme among the collection, making the experience of creating even more inviting. On top of great-sounding renditions of classic synthesizers, one hidden jewel within the collection comes via their Piano V2. For the longest time, I’ve had a go-to virtual piano that I thought covered everything I needed. That was until Piano V2. This piano sits perfectly in tracks with very little processing. Of course, what would you expect when each of the other synths in this collection does the very same thing. Tack on Synthopedia’s new presets and brand-new ideas come leaping out of the speakers with just a press of a key.

While there isn’t much to complain about, I had a few small issues that previously popped up. Most of the crashes and random dropouts are a thing of the past, but the big problem that kept popping up involves syncing the synths to host tempo in a DAW. Most of the synth’s did not like 3/4 or 6/8 timing. Also, I get that most of these synths are quirky when it comes to tempo sync in real life, but please give me the option to lock any synth that runs a sequence or arp to absolute time. An expanded section would be most helpful. There were a few presets I loved but could not for the life of me sync to rhythm correctly.

For the sheer number of different synths, V Collection is an absolute no brainer. If you broke the price down per synth, you’re paying about $20.00 per unit. This price is staggering, considering the beautiful interfaces, intuitive controls, and massive collection of masterfully organized presets.

Whether you are a beginner, an advanced sound designer, or someone who just relies on presets, V Collection has you covered. The synths sound as beautiful as they look, and the presets are some of the absolute best in the business. Elements from V Collection have been on every single track I’ve produced since 2006 with no sign of changing. It’s going to take a heavy hitter to knock this out of my top spot as far as synths go.