Sennheiser e835 vs Shure SM58: Which Is Right for You?

Today, we’ll have a look at the Sennheiser e835 vs Shure SM58. These are two popular handheld dynamic microphones for live use. How does the SM58, a longtime favorite since 1966, stack up to the competition made almost thirty years later?

Both the Sennheiser e835 and Shure SM58 are cardioid dynamic microphones suited for live vocal performance. On specs alone, you’d find very little difference between the two of them. Even in terms of price, the pair is identical.

However, the real differences lie in how they reproduce sound. The godfather of handheld vocal mics, the SM58, has a pronounced low-end rolloff before flattening out at 100 Hz, and a prominent midrange presence boost between 2 and 6 kHz. This is followed by a dip between 7 and 8 kHz, before one last climb from about 8 to 10 kHz for some airiness.

The Sennheiser e835 has a gentler low-end rolloff, but doesn’t flatten out until 200 Hz. Its midrange is a bit more even and natural. It begins to slowly climb at 2 kHz before reaching the highest boost at 5 kHz, then turns down slightly but remains boosted throughout the rest of the high-end. Most ears will tell you the Sennheiser is the airier of the two.

Obviously, how these mics actually perform depends so much on the source material, e.g., whoever the vocalist is and how their voice interacts with the microphone. Generally, the Sennheiser sounds a bit better out of the box thanks to the wide low-end rolloff and the boosted highs. The 58 needs a bit more love in the EQ department, but it handles that very well.

The e835 can appear to be a bit more sensitive across the frequency range than the 58 because of its big top-end boost, which can work better for quiet vocalists. On the other hand, the 58 is as rugged as it gets, and can handle the loudest and most abrasive metal vocalists with ease. 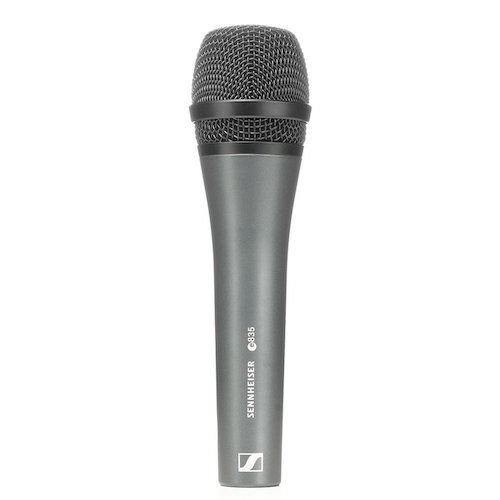 The e835 is Sennheiser’s answer to the legendary SM58. Released in 1998, it’s a relative newcomer compared to the age-old design which Shure seemingly perfected in the mid ’60s.

The e835 is a cardioid lead vocal stage microphone. It has a presence boost to ensure vocal clarity in dense live mixes. Literally on the other end of the spectrum, the lows are carved out in such a way to minimize proximity effect. You can consider it sort of pre-EQed specifically for vocals. 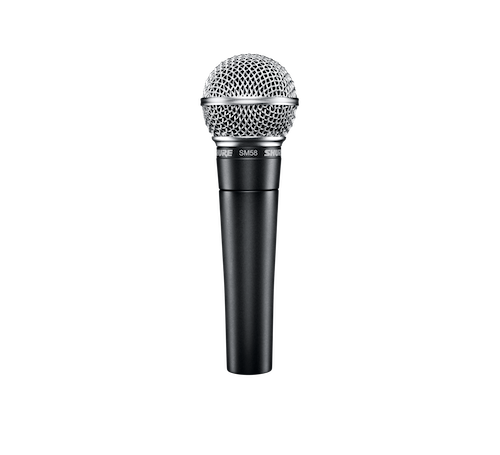 For almost sixty years, the Shure SM58 handheld dynamic mic has continually found itself on stages and pulpits across the world. There’s a reason for its longevity; the SM58 is affordable, reliable, and sounds great for the price. The SM58’s design has proven it a timeless classic, and it’s not going anywhere anytime soon.

From a performance standpoint, the SM58 is tailored to target the main sound source while minimizing background noise, delivering warm and clear vocal reproduction.

It’s a close call, but the Sennheiser e835 vs Shure SM58 debate can be summarized as follows. The Sennheiser is going to be brighter and need less EQ in the low mids thanks to a wide bass rolloff up to 200 Hz. Out of the box, it sounds great for vocals and the boosted highs make it sound hi-fi.

The Shure SM58 is a workhorse, plain and simple. It can sound muddier than the Sennheiser, so most engineers will be reaching for EQ to help it sound its best. Still, the frequency response caters to vocalists and shouldn’t require a ton of help to sound good. Further, because of the 58’s similar DNA to the ubiquitous SM57, you’ll likely have more success trying it on other high SPL sound sources than the Sennheiser.

Shure vs Sennheiser, Sennheiser vs Shure. Both make stellar microphones at the end of the day.