LiquidSonics Seventh Heaven reverb is a plugin reproduction of the Bricasti M7 hardware unit. The company is known for their superior convolution modeling, which Seventh Heaven has in spades!

Convolution digitally simulates an actual physical space. It works by taking an impulse response of a space and using it to generate a digital recreation. The result is one of the most natural sounding reverbs you can get.

As in-the-box recording and mixing became more and more viable in the early 2000s, convolution reverb plugins started becoming available. At the time, however, they were extremely CPU-heavy and still miles behind hardware studio reverb units.

Today, processing power is much less an issue. Still, though, most popular reverbs are algorithmic rather than convolution — enter Seventh Heaven reverb by LiquidSonics!

You can take an IR of both real environments and electronic hardware reverb units. The biggest advantage of convolution reverb is its accuracy and naturalness. The downside is that it requires a lot of processing power.

Algorithmic reverb creates echoes using mathematical algorithms to simulate the delays that occur in natural reverb. They don’t sound as natural as convolution reverbs, but they don’t take nearly as much CPU power.

LiquidSonics founder Matt Hill saw a huge hole in the software reverb market of the early ’00s. He didn’t have a good one to use, so he chose to create his own low-latency convolution reverb for his final year dissertation in college. This gave him the basis of a great sounding reverb — as good as anything else available at the time.

Matt Hill worked in aerospace for a time before returning to develop the best convolution reverb he could. Reverberate 1 was the first. This then led to creating Fusion-IR; this was his proprietary way to create convolution reverbs that have organic modeling characteristics. This technology debuted in Reverberate 2, later being licensed for Slate Digital’s VerbSuite Classics.

Currently, LiquidSonics is one of the most respected names in convolution modeling used by top professionals in music and post-production.

Seventh Heaven reverb is the most faithful plugin emulation of the Bricasti M7 hardware reverb unit. For years, plugin developers tried and failed to capture the sonic excellence of the Bricasti. The M7 contains the world’s most realistic simulations of rooms, spaces, and plates. From tight, realistic interiors, chambers, and studios, to lush outdoor expanses, cathedrals, and halls, the M7 can do it all. This is part of the challenge in designing a plugin with the same capabilities.

Seventh Heaven Professional reverb combines the best of the algorithmic and convolution worlds. It has the flexibility of algorithmic reverbs which allow you to perfect the acoustics of a space, and retains the organic, lively vibe of a quality convolution reverb. 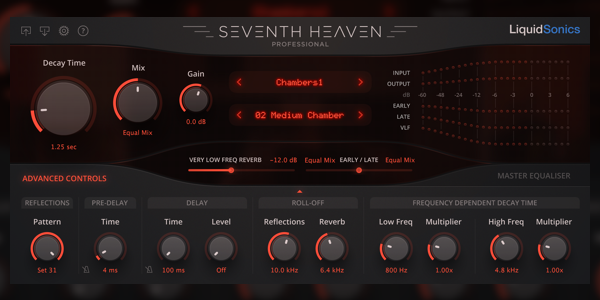 As an M7 emulation, it contains over 200 of the exact same presets found in the hardware unit. It’s also very user-friendly with a straightforward interface. For most users, simply loading up a one of the hundreds of presets with no tweaking gives a fantastic, totally usable reverb for the mix.

Of course, you can dive headfirst into complex editing abilities with Seventh Heaven reverb. One really cool feature is being able to sync pre-delay to your DAW tempo. Also, for the first time ever in a convolution reverb, you can modify the early reflection patterns, specify full-bandwidth roll-off positions, and set three frequency dependent decay times.