When it debuted at the Frankfurt Prolight + Sound Fair in 1998, the SPL Transient Designer was mysterious new technology. Everyone who visited the SPL booth had the same question: is it a compressor, or is it a noise gate?

Creator Ruben Tilgner (who would go on to co-found Elysia) had invented something brand new altogether. The SPL Transient Designer was a dynamics processor, but it didn’t affect the entire envelope. The idea was simple, as was using the product itself. But it had such a profound impact on the signal running through it that it became an instant classic.

Tilgner’s discovery of differential envelope technology (DET) provided additive or subtractive envelope control over just the attack and sustain. Independent manipulation of those elements, without a threshold, was pretty revolutionary — existing dynamic processors like compressors or gates not only effected the entire envelope, but they were level-dependent as well.

The Transient Designer immediately became a studio essential. It naturally became a go-to on drums, partly because the TD4 is four channels, but also because they’re an instrument with sharp, defined transients. For example, the SPL Transient Designer could let you increase the attack of a snare, or reduce the sustain of a tom to minimize room sound or bleed. 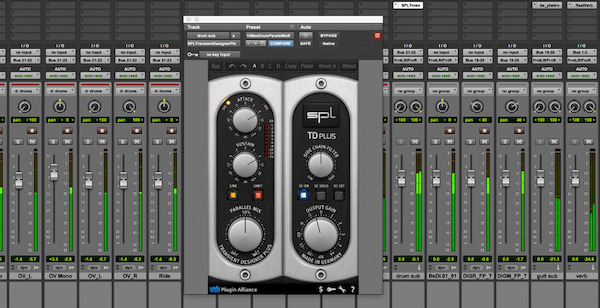 The software is just as easy to use as the hardware. Its main controls are Attack and Sustain, which you’d use to boost or cut those parts of the envelope. Some added features unique to the plugin are a Parallel Mix knob, Output Gain, a Sidechain Filter, and a soft-clip Limiter which prevents digital clipping.

It’s $199, but Plugin Alliance run frequent sales and promotions. Plus you can always try it for 2 weeks before you commit to purchasing it. Or, you could try an SPL Transient Designer alternative, such as the free Flux Bittersweet plugin.

Worth mentioning is that UAD also has their version of this plugin, without the ‘Plus’ features. It runs on dedicated DSP using UA hardware.

Transient Designer 4 by SPL is available as a 1u rackmount unit. This is the design that made its first appearance back in 1998. It sports 4 channels, each with Attack and Sustain controls and the option to stereo link channels 1 & 2 and 3 & 4. And that’s it!

SPL also makes the TDx 500 series module. This one actually looks more reminiscent of the plugin, and even includes a Mix control and Output Gain that the TD4 lacks. Mix can be useful to balance the dry/wet versions of the signal for more transparent transient processing, if that’s your thing.

The SPL Transient Designer gives you the ability to shape the attack and sustain of a signal, independent of threshold. It was a huge breakthrough in 1998, and is still a favorite secret weapon of many mixers today.