Is Waves Vocal Rider the Solution to Levels?

Vocal levels are one of the most important things to get right. Even with all the compressors in the world, nothing compares to putting in the work and riding the fader — automating the levels in each part of the song for a smooth, even vocal delivery. In what might be considered the ultimate ‘cheat code,’ Waves Vocal Rider does that work for you.

Vocal rides/automation is one of the final touches of a mix. It literally requires a human touch, in which the mixer relies on experience, creativity, and intuition to get the levels right. In many cases, avoiding fader rides will lead you to over-compressing the track, and the end result won’t be as good.

Of course, a plugin which does that automatically raises some eyebrows. It opens up the conversation about AI in digital mixing, and whether it’s any replacement for the stuff engineers have been doing for decades.

At the end of the day, though, it’s just a plugin! It can be a real time-saver, but rest assured, robots aren’t taking over (yet).

What does Vocal Rider do?

Basically, it hears the incoming signal and adjusts it to stay inside a user-set dB range. All you need to do is set the target range of the vocal level in relation to the rest of the mix. Then, Vocal Rider compensates for anything outside the target, raising or lowering the vocal gain. The biggest thing is that, unlike compression, this plugin won’t color the track.

Since it’s a fader, Vocal Rider sits naturally at the end of your chain. However, it can also be great at the beginning. There, it provides some clean leveling before sending the signal to other plugins.

Using this plugin creates an automated, fast way to clean up a vocal track, especially if the performer doesn’t have great mic technique. The alternative is manually leveling everything out with either clip gain or written automation. This works, of course, but requires a lot more time and attention to detail.

Just loading up an instance of Vocal Rider will yield some pretty good results. Of course, you also have the ability to manually go back and tweak the automated moves the plugin makes. That way you can bring some humanity back to the final vocal rides!

For quick mixes when the client is already on their way out the door, though, even Vocal Rider’s first pass is better than nothing. 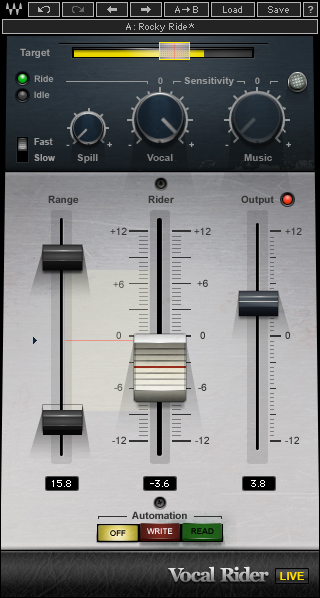 The Vocal Sensitivity knob tells the plugin to differentiate between vocal signal and background noise. Essentially it’s a threshold control that tells Vocal Rider to ignore sounds below a certain level. A Ride/Idle LED lights up when it detects vocals above the threshold.

Target lets you set the level range for your vocal. The speed of the fader’s movement/reaction time is preset, but there is a fast Attack setting if you prefer that. Vocal Rider also handily includes Waves’ proprietary breath‑detection algorithm, so that the plugin doesn’t crank up breaths! That would be counterintuitive.

The key to getting the vocal to sit well in the mix is to adjust the Target and Music Sensitivity controls after setting the Vocal Sensitivity. Setting Sensitivity first means that the plugin is reacting only to the vocal, not extraneous noise.

Music Sensitivity then determines the amount by which Vocal Rider reacts to the overall mix level. For instance, if the song gets louder in the chorus, the vocal will also come up so it doesn’t get buried.

Finally, you have the Range Min/Max settings, which restrict the amount by which the vocal is automated up or down.

Waves Vocal Rider isn’t trying to steal anyone’s job; it’s just trying to make it a bit easier! If you normally do manual vocal rides, it’d be a good experiment to see how the robot’s moves compare to your own. And if you don’t do any vocal automation at all, definitely give the plugin a shot!