What Is a DI Box for Guitar and What Does It Do?

Ever wondered what a DI box is and why you’d need to use one? Look no further as we discuss all things DI for guitar!

What Is a DI Box?

The purpose of a DI is to convert an unbalanced, high-impedance instrument output to a balanced, low-impedance signal. Balanced signals come out at mic-level, which means they can readily connect to mixers, PAs, and recording equipment. Not only that, but by converting an unbalanced signal to a balanced one, you can run the XLR cable as far as necessary without introducing noise.

How Does a Direct Box Work?

Let’s look at how these devices work from a practical standpoint as opposed to a technical one. First, you take the output of an instrument and run that to the input of the box. DIs are used heavily in live sound, typically for acoustic guitar, bass, and keyboards.

From there, you can take the output of the DI and run it to a mixer, PA, or other equipment for amplification. Note that this is a totally dry signal coming off the guitar or bass’s pickups, so front-of-house engineers will need to process the signal on their end. This is why you probably won’t see electric guitarists using a DI box in a live situation. You’d rather mic their amp so they can keep their tone. But it works well for acoustic guitar and bass guitar (and keys).

Now, you can also use the thru connection on a DI box to split the input signal. The guitarist/bassist/keyboardist can run an amp for stage monitoring or audience members close to the stage, while FOH gets a dry signal to process straight to the speaker system. Again, this is best for signals that don’t heavily rely on an amp/pedals for tone shaping.

When Would You Need to Use a DI Box?

In short, anytime you need to run a high-impedance instrument signal a long distance. Converting an unbalanced signal to a balanced signal eliminates any potential interference that could occur. In live sound situations especially, cable runs can get quite long.

For example, it wouldn’t be ideal to take the output of an acoustic guitar pickup and run that straight to the board over a long distance. Instead, add a DI in the chain to convert the signal first.

How to Choose the Right DI Box 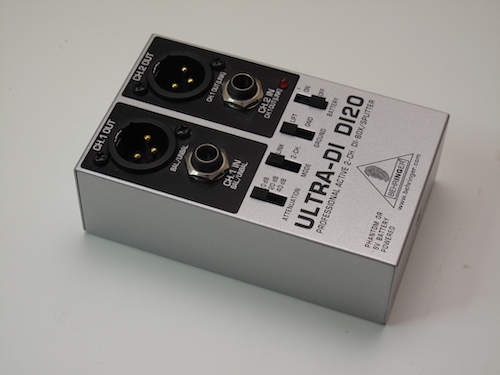 Most DIs have a pretty standard set of features, including a pad, a polarity switch, and a ground lift. Apart from that, it mostly depends on how you intend to use it, and most importantly, with what kind of instruments. The following is a simple rule of thumb for deciding which is the right box based on the instrument:

Active DIs are capable of boosting lower-output sources, while passive ones work better with hotter output instruments and don’t need the extra amplification that an active DI box provides. If you remember that opposites attract, you should have no trouble matching the right DI box to an instrument.

So we’ve seen what DIs are capable of in a live setting, but what can they do in the studio? When recording electric guitar or bass, a DI lets you split the signal and record the wet sound coming from a miked up amp and a dry sound coming straight from the pickups.

It’s always a great idea to record a direct track. It gives you a ton of flexibility while mixing, especially if the amp sound just isn’t working anymore. You can reamp the DI signal and tweak the tone to no end until it’s perfect for the mix; you can even use amp sim plugins if you have some that you really like. Ultimately, recording a DI in the studio provides a failsafe later in the process.