The Arturia MiniLab MK2 is a portable USB MIDI controller for end-to-end music creation. While its predecessor emphasized a huge bundle of included software, Mk2 pares that down and instead focuses on the quality of the hardware.

The original MiniLab debuted roughly 7 years ago. At the time, the build quality was impressive, but it was the ~5000 presets taken from Arturia’s V Collection that really set the keyboard apart. The controller came bundled with Analog Lab so you could potentially spend the rest of your days sifting through thousands of sounds based on classic vintage synths.

With the release of Mk2, Arturia ditched the gigantic software bundle in favor of Analog Lab Lite, while simultaneously increasing hardware component quality across the board. The result is a rock-solid MIDI controller that feels much more expensive than it is.

Here are some of the key features in Arturia MiniLab MK2:

Each preset automatically maps the most useful parameters to MiniLab Mk2 for easy tweaking and performance control; plus, you can easily custom map to any controllers via the MIDI Learn feature. Basically everything you’d inspiration is there in Analog Lab Lite.

Albeit nowhere near as extensive as the original Analog Lab found in the Mk1 controller, Lite provides more than enough options for making music.

Arturia MiniLab Mk2 connects directly to your computer via USB for seamless DAW integration. Many beginning users wonder how to connect Arturia MiniLab to Ableton, or does Arturia MiniLab work with FL Studio — the answers are ‘plug it in’ and ‘yes’!

The controller actually comes with Ableton Live Lite software, so you can rest assured that it integrates easily with no clunky driver installation. This goes for any DAW, though, which should automatically recognize the Arturia MiniLab MK2 as a MIDI device upon plugging it into your computer. 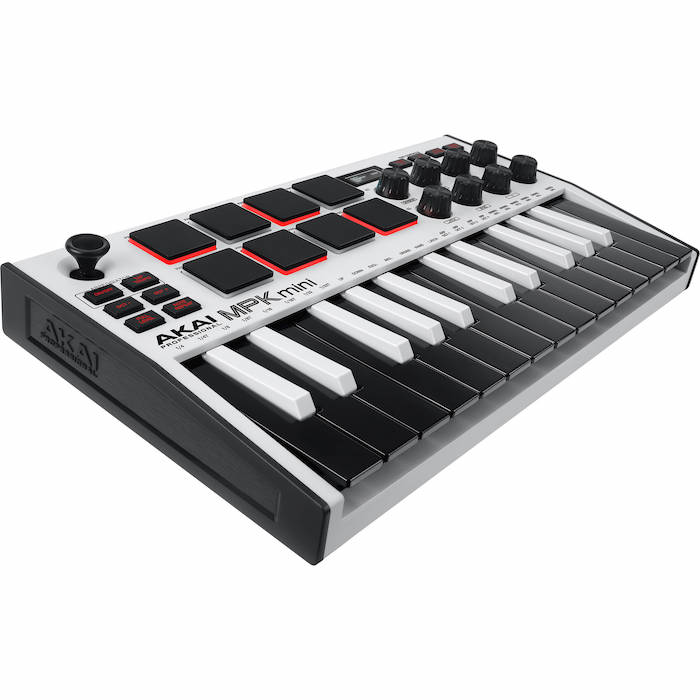 Akai’s MPK Mini is one of the most popular small footprint MIDI controllers on the market. There are more similarities than difference between the two, so it’s really a coin toss.

For one, the MiniLab is slightly bigger and heavier than the MPK, though not by much. Its keys are a bit larger, which may be preferable to users with bigger hands. The MPK is perfectly playable, but some people have complained about feeling cramped on the keys.

The biggest difference between the two is build quality, where the MiniLab has the MPK beat. That isn’t to say the MPK is ‘cheap,’ however. Both controllers are extremely portable, feature-rich, and ready to perform. Included software is the primary difference, and Arturia’s Analog Lite is arguably preferable to the MPK’s Hybrid 3, Wobble, and MPC Essentials.

The Alesis V25 is another competitor in the 25-key MIDI controller world. For one, the V25 is significantly bigger than the MiniLab, more at home in desktop setups than portable rigs. It also only has 4 rotary knobs compared to the MiniLab’s 16.

The V25 feels may feel more natural to some since it has a full-size key-bed. But don’t expect weighted keys in this price range. Alesis also includes two wheels for modulation and pitch-bending as opposed to Arturia’s touch sensors. Again, this feels more like a full-size synthesizer but reduces portability.