How to Get Rid of Vocal Sibilance

Vocal sibilance occurs when singers pronounce words with ‘s’ and ‘z’ sounds, and to a lesser extent, ‘f’ and ‘v’ sounds. Phonetics calls these ‘fricatives’; they’re mainly characterized by the hissing noise they produce. When a passionate vocalist is belting into a microphone, the tones can be very harsh and unpleasant. But if you know how to get rid of vocal sibilance while recording and mixing, you’ll have a smoother sounding performance.

Sibilance usually happens somewhere in the 5 to 8 kHz range, but it can extend beyond that as well. Physically, when pronouncing words with fricative consonants, our mouths are constricted by our teeth, tongue, or palette. This causes pressure which forms the consonant sounds we associate with sibilance.

It’s a completely natural part of speech, but when you’re up on a sensitive microphone, it gets harsh. Combine that with compression, and it gets even more noticeable.

Luckily engineers have come up with a number of ways to minimize this harshness. Some of it has to do with actual recording technique, while the rest can be managed in-the-box. Learning how to get rid of vocal sibilance is a fundamental skill.

Dealing with sibilance at the source

Most of time we want to prevent any issues as early in the signal path as possible. There’s sort of this ‘we’ll fix it in post’ trap that’s easy to fall into with digital technology. Unfortunately, this is completely counterintuitive to the art of recording.

Sibilance can — at least partially — be managed at the source. So, how do we get rid of vocal sibilance while recording?

Great microphone technique, especially on vocals, is almost a lost art. I know plenty of engineers who’ve mixed vocals that were recorded straight into a laptop mic. And these magicians somehow made it sound good! The point is, if an artist has made their way to your studio, do your diligence and get them on the right mic for their voice.

With sibilance, you wouldn’t want to put a bright vocalist on a bright mic. Something a little darker and subdued in the high-end would be a better choice so those harsh consonants aren’t even more amplified.

Sometimes it isn’t just point and shoot. We tend to think 0º on-axis, mic capsule right at the singer’s mouth. Sadly this won’t do anything to help us get rid of vocal sibilance.

Try moving the microphone just a bit off-axis from the vocalist, to either the left or right side of their mouth. Non-directional low frequencies won’t be affected, but you can subtly change the way higher frequencies are picked up.

Try it and see if it works! If it changes the tone too much, you can go back on-axis.

Back the performer up 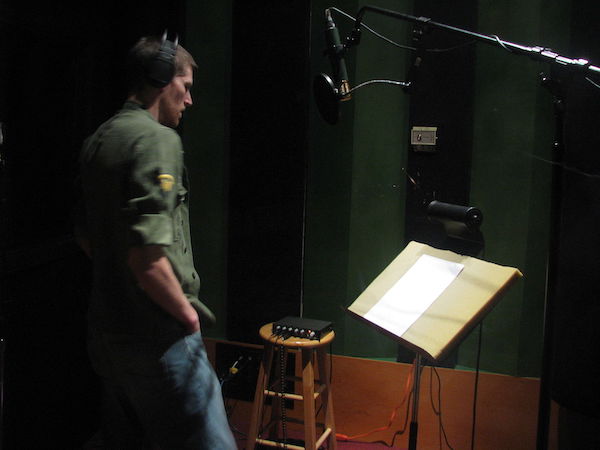 This falls into the positioning category, but you can have your vocalist stand further away from the microphone as well. They don’t need to be right up on the capsule, which subsequently picks up every mouth noise imaginable. Having them stand about a foot away can do a lot to minimize that harsh sibilant energy coming in.

Getting rid of sibilance in-the-box

We’re going to end up here at some point. Even by doing everything you can at the source, some pesky sibilance is going to stick out in a recorded vocal. Our ears are evolved to be more sensitive to higher frequencies, so it always manages to make itself heard. Thankfully there are effective ways of handling it in the mix.

You can manually ride the fader, turning down loud ‘esses’ as you go. This is tedious and time-consuming, but ultimately one of the least obtrusive ways of getting rid of vocal sibilance.

If the fader ride isn’t your thing, clip gain works just as well. The approach is the same — hear some sibilance, zoom in, select it, turn it down. Voila! Sometimes the work just has to be done… 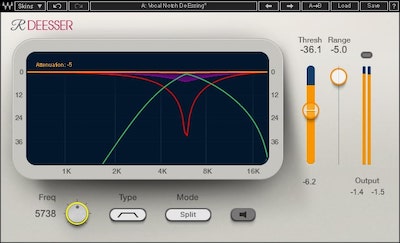 By and large, de-essers do a pretty amazing job of controlling sibilance. They’re essentially frequency-specific compressors — you choose the frequency, set the threshold, and the de-esser will turn down that frequency when it gets too loud. De-essers are designed to work on those upper mids and high frequencies where sibilance abounds!

There are a couple ways to work around this, both of which allow the de-esser some breathing room.

Conclusion: How to Get Rid of Vocal Sibilance

These are just a few ways engineers have smoothed out harsh vocals. Realistically there are many others, and perhaps much more advanced ways of dealing with a sibilant vocal. Feel free to share your own techniques and experience with us!