The kick drum is one of the most important elements of any mix. Together with bass, it forms the backbone of a song and establishes the groove which grabs listeners’ attention.

It’s a challenge to get the kick sounding its absolute best. So many factors go into mixing it properly for the context, and on top of that you have to work it in around other low-end heavy instruments like bass and even piano or keyboards. So how do you go about getting the clearest, most powerful sound out of it?

1. Get it right at the source.

If you’re in charge of recording kick as well as mixing it, you have the opportunity to make life easier right from the start. One of the biggest challenges we face as engineers is getting a poor recording and trying to “fix it in the mix.” The fact of the matter is, this just doesn’t work.

The first consideration is mic selection. Engineers have lots of go-to kick drum microphones, including the AKG D112, EV RE-20, Shure Beta 52, and even Neumann U47s. Kick drum mics need to be able to handle high SPLs, so dynamics tend to work best because they’re not too sensitive.

After you’ve settled on your favorite mic, experiment with different placements. Lots engineers like it inside the head pointed at the beater. You might also record a kick in and kick out, so you’ll need to find the best sounding locations for each.

Experiment as much as you can to find what sounds best to you! You’ll save yourself massive headaches during mixdown if you’re able to get it right at the source.

2. Make sure there are no phase issues.

If you’ve used multiple microphones on your kick, you’ll need to eliminate any phase problems that might come up. You can do this by flipping the polarity on one of the tracks, or even manually lining up the waveforms.

This is one of those little things that might get overlooked by engineers who are still learning. But if you take the time to get phase correct, you’ll be much happier as you get deeper into the mix!

3. EQ opposite the bass guitar.

It’s up to the mixer’s discretion and the genre, but it’s generally understood that choosing either the kick drum or the bass guitar to lead the bottom end is a necessary move. If you level and EQ both similarly, the two end up fighting for space in the mix, creating an inarticulate low end.

Here are some frequencies of interest in kick drums:

4. Roll off lows on other instruments. 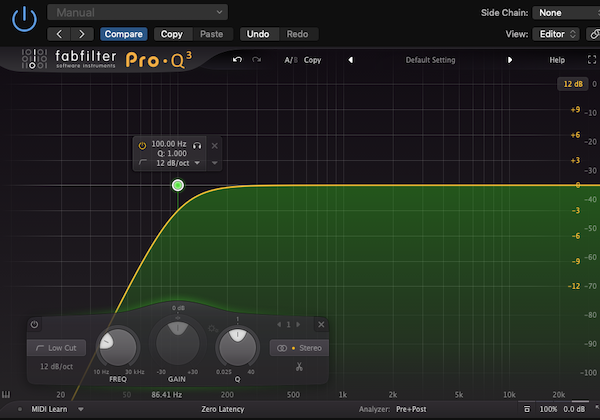 Low end occupies huge amounts of space in a mix. Too much build-up in the bottom sounds muddy, inarticulate, and just plain bad.

The kick drum is a super fast transient that’s easy to screw up with poor compression technique. And you’ll definitely need compression to even out the hits; drummers are still human, after all!

Even with a very consistent drummer, kick still benefits from a little bit of compression. Even just a dB or 2 of gain reduction at a 2:1 ratio can sound incredible. Keep in mind that a ratio of 2:1 retains the most punch because it acts on transients less.

The actual setup of the compressor is less crucial at low gain reduction. At 1-2 dB of gain reduction, attack and release aren’t nearly as important as they are with heavier compression. Play around and see what sounds best to you for the material.

For heavier compression, like 3 to 6 dB, you’ll want to go for a medium-slow attack to retain the fastest transients on the kick drum. The key is to experiment with attack and even ratio to highlight the transients rather than push them down. Sometimes increasing the ratio adds that aggression and punch you’re after too.

Then there are two basic means of setting the release time on kick. The first is to set it super fast, which adds density to the drums by bringing up the low-level details like hit decays.

The second is to tempo sync the release to the pulse of the song. When you get the meter on the compressor pumping with the beat of the song, you’ll know you have it synced. This method emphasizes the groove of the song—depending on the material, this can be an incredibly effective approach.

Especially on kick, you can set the release time so it just starts to die when the next kick beat comes in.

6. Sidechain bass to the kick drum.

This is common technique in most genres, whether you’re using a bass guitar and acoustic drums or kick samples and bass synths. When low-end heavy mix elements are fighting for space, it’s easy to give them a little help with sidechain compression. You start by putting a compressor on your bass track and keying its input with the signal from the kick.

Setting the right attack and release is crucial, because this will dictate how the bass ducks when the kick hits. You don’t want to be sucked so far down into the mix that it’s extremely audible. Rather, a subtle downward push to make way for the kick is preferable.

7. Beef up a weak kick drum with a low frequency sine wave.

Instead of using sidechain compression, you’ll now be using a noise gate sidechain. Key the input to your kick drum, and you’ll be on your way to a meatier, low end monster. You’ll want to adjust the gate’s parameters so that the sine wave only sounds when the kick drum triggers it.