It’s perfectly normal to feel like you’ve hit a wall when it comes to progressing as a mixer. A lot of the time we rely on our tried and true methods which get the job done, but ultimately leave something to be desired. If you’re in need of some mixing tips, both creative and technical, these 15 are some of the most useful and fun to try!

A simple but effective technique to create more width and exaggerate choruses is to start with your background vocals narrow around your lead vocal then pan left and right for added excitement.

You can take it a step further and automate your pans slowly until they’re very wide by the end of the section.

For example, you can take a generic drum loop (even one that doesn’t seem appropriate for the song!), time it to the track, remove the low end and distort it, and pan certain elements left and right. The result can be as subtle or as outrageous as you’d like. Typically, you’d probably want to bury it slightly beneath the unaffected tracks for some “ear candy” that headphone listeners will appreciate.

Reversing cymbals is a standard trick used to build excitement or indicate transitions. It also just sounds really cool! If you take the technique a step further and incorporate clever use of pan automation, the effect is even more exaggerated.

So, if you’re using the reverse cymbals trick to build up to a chorus, for example, you can pan from one side to the other, gradually speeding up until the next part of the song comes in. The anticipation it creates is an excellent way to add excitement to your mix.

Boosting high end on electric guitars helps them cut, and high passing creates room for the bass and kick to breathe. After boosting presence, though, some notes get really harsh. To control that harshness while still retaining high-end clarity, you can de-ess after the EQ to tame shrillness.

This trick allows the electric guitar to feel brighter but never too bright that it detracts from the vocals and loses it’s place in the mix.

For more on guitars, check out Mixing Basics: Guitar! 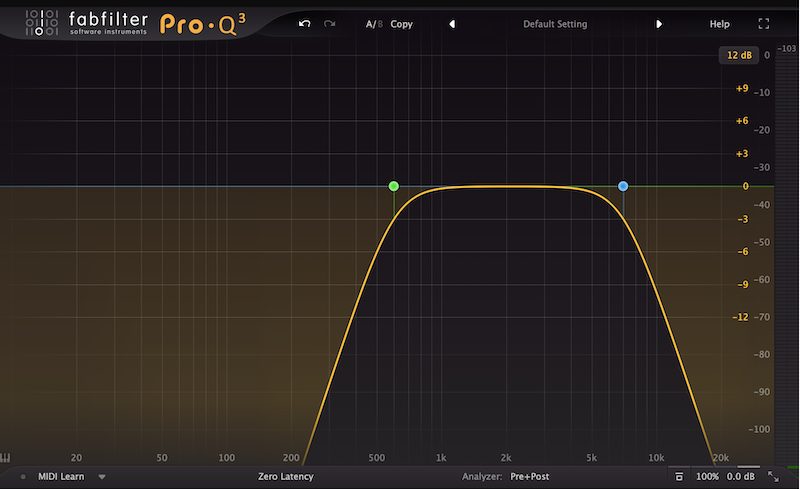 Unfiltered reverbs and delays can add a whole lot of mud or harshness, cluttering up an otherwise decent mix. One of the most common mixing tips to reduce this unwanted clutter is to high and low pass your reverb and delay returns.

The old “Abbey Road” trick was to high pass around 600 Hz and low pass somewhere around 7 kHz. This way, you’re removing excessive high and low end, so the dry signal isn’t completely overwhelmed by a full-frequency reverb or delay.

This and reverse reverb are some of the easiest mixing tips to implement that really cleans up a mix!

6 – EQ DIs and Amps Differently for One Cohesive Sound

This works especially well for bass guitar, where the DI sound is already pretty good anyway. When you want to create a nice blend between the DI and the recorded amplifier, EQ’ing each differently is the way to go. You might, for instance, both high and low pass the DI, while only high passing the amp to let its high-end personality shine.

7 – Sidechain Guitar to the Lead Vocal

This is a simple effect to set up. If you find yourself at the end of the song, and the lead guitar and vocal are both wailing away at the same time, this will help you mix them together. Send your vocal to a bus. Make that bus the key or sidechain input on a compressor that is on the lead guitar track.

Now, when the guitar is playing and the vocals aren’t singing, the track will be out front. As soon as the vocal comes in, it will trigger the compressor on the guitar track and duck the guitar by an amount you set with the threshold.

Utilizing sidechain compression is one of many great mixing tips!

8 – Sidechain Overheads to the Snare

This is another very useful side chain compressor trick. If you record your overheads and you find that you have too much snare sound in them, you can simply set up a bus on the main snare channel. Send the bus to a compressor on the overheads. Now, every time the snare drum hits, it will trigger the compressor and duck the snare down in the overheads. But when the snare is not playing, your cymbals will be uncompressed.

9 – Use Parallel Compression for Aggression and Excitement

Parallel compression involves duplicating the desired track, and then slamming the duplicate with a compressor to the point that it sounds unpleasant on its own. Then, you slowly blend the main track with the compressed one until the desired result is achieved.

Another easy way to set up parallel processing is to create an auxiliary input track. Put a compressor with super aggressive settings on it, and then send any track you want to the aux input.

It’s common on vocals and drums, but you can try it on anything when you want to add some aggression or excitement to a mix.

Knowing where certain sounds in the human voice live and how they effect vocals means you can make quick, precise adjustments with less guesswork. Or at least with some educated guesswork! These are five general areas of interest for vocal EQ:

Experiment with each of these frequencies or bands and see how they effect your particular vocal mix. If a performance feels muddy, try cutting a bit around 240-250 Hz. If sibilance is particularly harsh, sweep between 4 and 7 kHz to find the most offensive frequencies and tame them. As always, listen and use what best suits your personal taste and the mix.

How often do you consider saturation when mixing a vocal track?

When we use the term “saturation,” we’re referring to plugins that emulate what analog equipment used to do to a recording. Saturation adds rich harmonics/overtones and a bit of distortion to make a vocal “fatter” and more exciting for listeners. It can help push a performance to the front for an “in-your-face” sound.

Experiment with saturation to give a vocal more edge, helping it stand out in a dense mix. Lo-Fi, included with Pro Tools, is just one example of these types of plugins that can enhance an otherwise dry/dull vocal. Mixing vocals is fun, so have some while you’re at it!

Sibilance–that hissing noise produced with “s” sounds–is a naturally occurring phenomenon within the human voice. On a recorded vocal, sibilance can often be extremely harsh.

Using a de-esser to control sibilant frequencies, generally somewhere between 4 and 7 kHz, is crucial. A great de-essing plugin will retain presence/clarity without totally flattening out an exciting performance. I’ve seen them used to tame some of the harsher frequencies around 1.5 kHz, too. Every voice is different, so mileage may vary from artist to artist!

An awesome trick for mixing vocals is to boost the top end with an EQ and control it with a de-esser. You’ll get the brightness and clarity from boosting with the EQ, minus the exaggerated “s” and “t” sounds thanks to the de-esser.

There’s a lot of misinformation out there about high passing; some people even go so far as to say not to high pass at all! This kind of “knowledge” spells doom for the low end of your mix. To create space for every instrument, use gentle high pass slopes, boost low end info that adds to the sound of the instrument, and high pass information that competes with other instruments. Great mixers will even high pass kick drums up to as much as 30 Hz.

Take breaks frequently, not only to save your ears, but to give you balance by listening in different environments. Take a break from just sitting between the speakers! Go to a different room, listen on another system, in the car, or wherever you can to give yourself perspective and a break from being stuck in one position for so long. This is probably one of the most important mixing tips you can put into practice!

Reference mixes are great for checking the direction of your mix. How’s my low end sitting? Check it against a mix whose bottom end sounds great. Is the vocal in the right place? Again, you can check it against a mix you know and love that has an amazing vocal balance.

However, don’t ignore your own work! If you are mixing a rock band that has slamming drums and you’ve done an amazing job on a track in the past with slamming drums, then reference that mix