Neve summing is an optional extension that integrates seamlessly into Universal Audio’s proprietary recording system/DAW, LUNA. The emulation intends to provide the width and dimension of analog summing for individual channels or whole mixes; currently, it’s the only authentic emulation of Neve console summing.

What is Universal Audio LUNA?

LUNA debuted in April 2020 as a complete, integrated recording system for Apollo interfaces. In short, it’s a DAW for Apollo and Mac users. Similar to the existing Console software, LUNA lets you record through UAD plugins in realtime with near zero latency. The whole idea is to capture the sound and feel of analog-style tracking and mixing inside a single piece of software.

LUNA is a free download, but a few of its major ‘selling points’ are analog summing emulations, integrated analog tape emulation, and a host of brand new UAD virtual instruments. UAD analog emulations are known as some of the best available; it should come as no surprise that the concept behind LUNA is to simulate the analog experience inside a DAW.

Neve and API summing are optional extensions (plugins) for LUNA. The idea is that either of these will turn a super clean and, dare we say, ‘sterile,’ digital mix into one with tons of mojo and character—as if the song was born on a real analog desk. From there, you can print your mix to tape with the included Oxide Tape Machine extension or the optional Studer or Ampex models.

In short, LUNA is a DAW. It’s built specifically for Apollo users and is essentially a deep platform for integrating UAD plugins with the goal of simulating analog workflow in a digital domain. 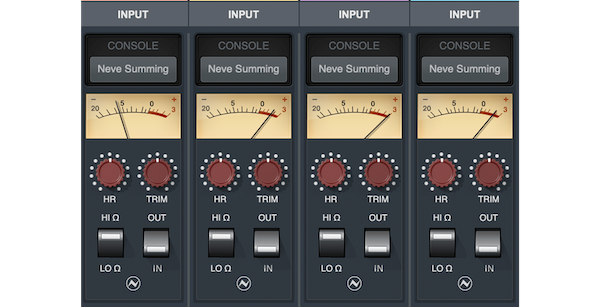 Recording engineers, mixers, and producers are lucky. We have access to hundreds of software emulations of classic hardware. We can run hundreds of instances of those emulations simultaneously. And we can do all of it affordably and without the restrictions of a real analog recording environment.

Interestingly, there hasn’t been a dedicated emulation of analog summing before. That was until LUNA launched and Universal Audio announced Neve summing alongside it.

Neve Summing by UAD is an emulation of a classic Neve 80 series summing circuit, including its 1272 bus amps. Controls are simple: headroom, trim, and impedance. Dial in the desired blend between these three on individual channels, on groups, or on the mix bus for unparalleled color and dimension that only analog provides.

It sounds great. And the way that it integrates with LUNA as an ‘extension’ rather than a plugin means you don’t have to manage tons of plugin windows when you initiate it across multiple channels. It simply shows up on the Input stage of each channel when you look at the LUNA mixer. Unsurprisingly, it does create a sort of ‘magic’ sound in most cases. Settings can be subtle or more pronounced, but the Neve Summing extension definitely adds ‘something’ that our ears tend to enjoy.

Why does Neve Summing sound good?

Analog recording generates randomness and nonlinearities. When you run a signal through real electronic components like transformers and op-amps, they create harmonics. And it’s those harmonics that make something sound ‘musical,’ or ‘warm,’ or ‘rich,’ or any of the other nebulous adjectives we love to use to describe sounds.

Using Neve Summing for LUNA inevitably adds a desirable character and color to a mix. Many of us would describe it as depth and dimension; which, in turn, produces cohesion and vibrance that you normally don’t get with digital.

Is Neve Summing worth it?

Does Neve Summing by UAD sound good? Yes. Is it worth switching DAWs for? Probably not.

The biggest problem with Neve Summing is that it’s exclusive to LUNA. And the fact that LUNA is so new means most of us have been using a DAW we like for years and years, getting to know it inside and out. Learning a new DAW is no small task; realistically, it’s simply not worth the effort to upheave your whole workflow for a neat plugin that’s exclusive to another platform.

Theoretically, you could do the bulk of your recording and mixing in your main DAW, then ship out the stems to LUNA to take advantage of Neve Summing and analog tape emulation. Whether that extra step is worth the effort is ultimately a decision you’d have to make for yourself; and mind you, that all hinges upon owning an Apollo interface and already being part of the UAD ecosystem.