If you’re an engineer in 2020, chances are you’re mixing hip-hop. It’s the most popular genre in the world, and there are countless up-and-coming artists getting in the studio and creating.

Recording and mixing hip-hop seems pretty straight forward, especially if you’re accustomed to working with full bands. You set up a mic, the artist gets in front of it, and off you go. Realistically, the genre presents some unique challenges of its own, from the rapid pace at which many artists like to record, to getting a vocal mix to sit right on a 2-track beat.

We’ll take a look at some general guidelines to mixing rap so you can be prepared to handle any client.

The vocals lead the way

The most important element of any hip-hop song is the vocalist him or herself; that should be a given! Even in heavily effected Travis Scott-style vocal productions, they’re still an in-your-face instrument leading the way. Listen to any of your favorite hip-hop tracks, and vocals are more than likely one of, if not the loudest, elements in the mix.

So normally, vocals should almost always be at the top of the proverbial mix hierarchy. If you’re lucky enough to actually get the multitrack to work with, kick usually comes second, and snare after that. From there, it’s a matter of leveling everything else around those three primary elements.

You won’t always have access to the multitrack instrumental when mixing hip-hop, however… 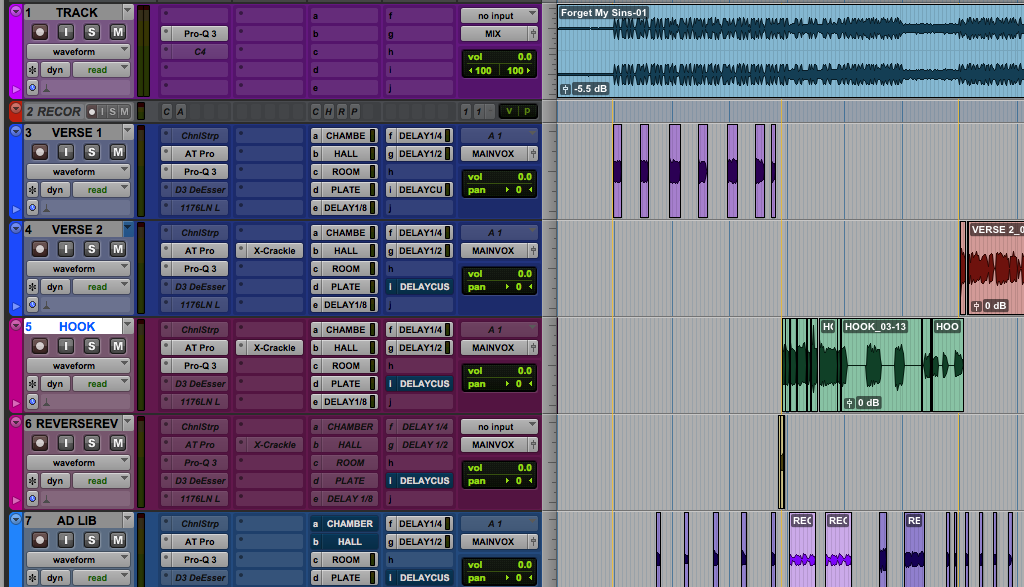 Mixing hip-hop vocals to a 2-track instrumental is incredibly common. Lots of artists routinely download pre-mixed instrumentals online and bring them to a studio to record. The challenge with learning how to mix to a 2-track beat is getting the vocals to sit in a space that feels right.

Without fail, a pre-mixed instrumental has been compressed and limited for loudness. Many hip-hop producers are mixing their instrumentals specifically with loudness in mind. This makes it tricky to try to squeeze some brand new vocal information into a seemingly complete arrangement.

So, the very first thing you’ll want to do is pull the 2-track’s level down to give yourself some headroom. If you don’t you’ll be hitting 0 just because you’re playing the instrumental back. I usually find 6 dB to be enough, but there are some particularly loud beats that have required more.

Here’re some other tips for mixing hip-hop vocals to a 2-track:

The most common problem you’ll run into when mixing vocals to a 2-track is that they’ll feel lost under the beat itself, or they’ll hover awkwardly above it. Most of this has to do with the fact that the beat is already heavily processed, and now we’re trying to add a ton of new information on top.

Most of the time we have no other choice than to let those vocals sit sort of on top of everything, lest they be totally overpowered. We can try to minimize that sensation, but it’s hard to completely avoid. One thing you can do to get them to mesh better with the 2-track is by compressing in small increments with the intent of creating a similar compressed feel that the instrumental already has.

We talk about this a lot, but you’ll want to avoid letting one compressor do all the work. If you do, you’ll hear it working way too hard — it won’t sound good. Instead, use a few compressors all doing a conservative amount of gain reduction.

Figuring out what works for you is all part of learning how to mix, but an 1176 into an LA-2A is a famous vocal chain worth trying! Then you can play around with various amounts of gain reduction to get the results you’re after.

Pay close attention to the overall timbre of the instrumental. Is it bright? Dark? Mid-rangey? This will give you some insight in how to start processing your vocals. You’ll want them to ‘match’ to a certain extent, again so that the vocals appear cohesive with the beat. A lot of this can be done with EQ and shaping the vocal frequency content.

You’ll want to find a similar space for vocals that the instrumental has. Some productions are fairly dry, and others can be ambient and spacey. This isn’t always an easy thing to do, but again, listen carefully to the overall “vibe” of the 2-track. This is just another challenge of mixing hip-hop vocals.

Ultimately, though, it’s a feel thing more than anything else here. You’ll know if a track calls for a ton of reverb/delay or not based on the style of music the artist presents. You can generally trust the vocalist to have chosen a beat that suits their sound; you’ll hear right away what they’re going for, and thus what sort of space will work.

Try not to overdo it if you decide to EQ the pre-mixed beat. You’ll typically want to avoid broad Qs and heavy cuts unless you want to totally change the quality of the instrumental; probably not a great idea. Sometimes just a gentle high-pass filter around 20 Hz can remove some of the sub frequencies that eat up a huge amount of space in your mix, buying you a bit more headroom.

If you can hear a specific frequency in the beat that really isn’t gelling with the vocals, try to notch it out. One problem I hear a lot are really harsh hi-hats that feel like an ice pick in the ear! I’ve been a little reckless at times and pulled down broad swaths of high-end info in those cases.

But again, be gentle if you can. You have to remember that your artist specifically chose this instrumental because they like it. They’ve probably written and rehearsed to it a hundred times, and it sounds a certain way to them. We don’t want to completely change the relationship they have with the beat by making it unrecognizable to them.

This is actually incredibly handy. With M-S processing, you can separate the information in the center from the stuff on the sides. So if you bring the center down a tad, you’re just making space for vocals.

These are some of the basics of mixing hip-hop. Hopefully it gives you some insight as to what to look for, and characteristics of the genre you should be aware of!