Since its inception in 2011, PreSonus Studio One has quickly become a go-to Digital Audio Workstation for beginners and pro’s alike. Combining the best parts of each DAW, Studio One offers a Customizable Workflow, incorporating everything you need in one window. The goal of Studio One is to take the intimidation out of producing your music with tools that grow with you. To accomplish scalability, PreSonus has three versions of Studio One: Prime, Artist, and Professional.

This is PreSonus’ free version. No, it doesn’t come with free shipping like Amazon, but it does come packed with enough to create great songs. You still get unlimited track count but are confined to two inputs and two outputs for the i/o section. Also, you can’t use any third-party plugins. So if you can’t live without Denise Audio Perfect Room, you’re going to have to fork over a little bit of money for Studio One Artist. Being stuck with their stock plugins is no issue, though. PreSonus have provided the basics in the form of a compressor, EQ, and a Virtual Instrument. Honestly, it’s more than what I started with back in the day with my ADAT and Mackie 1604 VLZ. If you’re averse to spending any money on a DAW, you can instead expand Prime with other PreSonus plugins via the integrated store. From there, you can buy any of the processors and effects they have to offer.

If you need to track more than two tracks at a time, you’ll need Artist. This version unlocks the i/o section as well as VST, AU, ReWire, and ARA2 support. Third-party plugin support used to cost Artist users an extra $79, but PreSonus has graciously taken that away. The number of stock plugins and instruments goes up as well, giving you more tools to assist in creating that next chart-topping hit. You also get access to

Pro is everything PreSonus has to offer. I’m talking gigs of sample libraries, loops, virtual instruments, and plugins. On top of all the content, you get the Mastering Section, Pipeline XT, and free integrated Melodyne pitch correction.

What’s New with Studio One Version 5?

So with the versions explained, we can get into all of the new tools you’ll have in your arsenal. This overhaul is no slouch. They’ve added entire sections into Studio One, each with brand new functionality and looks. Although there are 60 new features in version 5, explaining every one of these in detail would fill an entire novel, and that’s why we have manuals. Let’s get into some of the more notable and fun additions. 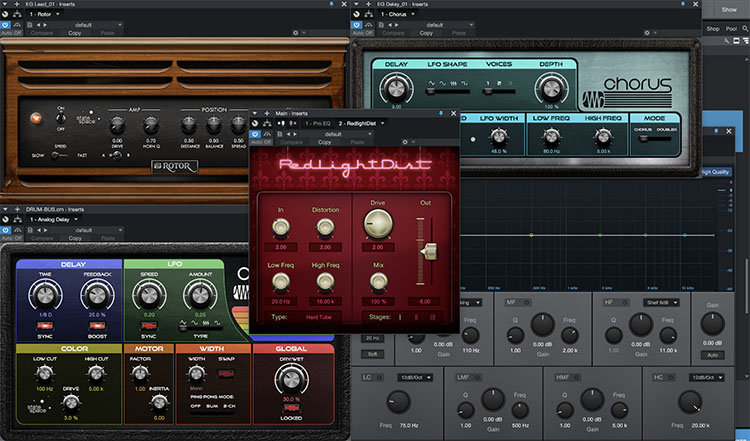 A commonly neglected section of a DAW, the stock plugin is usually strictly utilitarian and rarely improved. PreSonus has seen this disparity and has overhauled the native processors and effects. Each interface received a facelift, with both light and dark modes and updated graphics. All native dynamics plugins have added sidechain control, and processors with a filter option have an added input sidechain. Additionally, the Rotor, Analog Delay, TriComp, and Filter have an added State Space modeled Drive Stage. The Pro EQ also gets a little love with a 12th-octave display, input/output meters, and a linear phase low cut filter for more precise mixing. 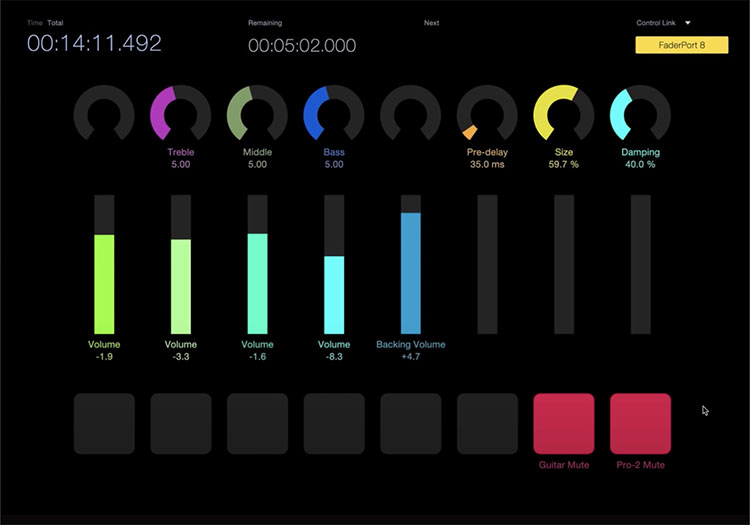 Most Digital Audio Workstations are geared towards recording and not necessarily for living in the moment. The lack of spontaneity makes for an overwhelming experience during a performance. Plus, you can’t look cool, squinting over a laptop screen on stage. Don’t worry, PreSonus has your back. The Show Page is an entirely new section to Studio One. Here, your recorded song can transform into an instrument in itself.

Virtual instruments, plugin chains, can be organized into a setlist, complete with separate songs and transitions. You can quickly arrange columns of backing tracks, real instruments, and virtual instruments into mixer channels. From there, the Show Page gives the user mapping to either pre-mapped PreSonus MIDI controllers or any external one.

Once arranged, a stripped-down Mixer and a Browser that gives the same drag and drop capability as in any other Studio One menu. They say practice makes perfect, and Performance Mode lets you get to know your setlist with a custom interface with only what you need in the performance. Lastly, templates can be created to recall other setlists. 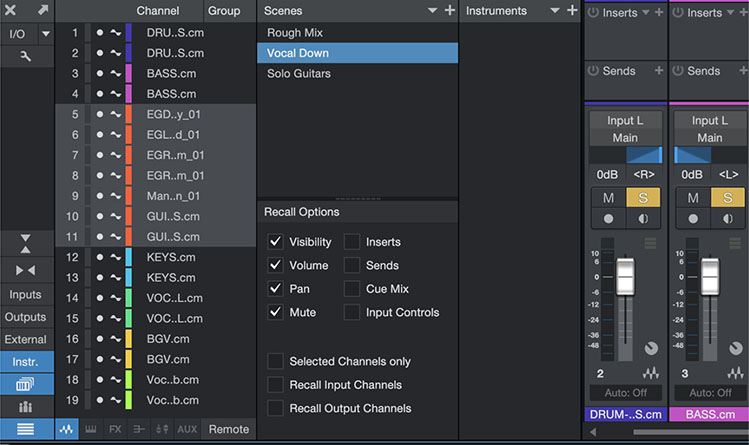 Tired of using “save as” for small mix changes? Mix Scenes allows you to make subtle or complete mix changes, all within the same Song file. Scenes create an instant snapshot of any changes you made. Everything below can be changed and saved into scenes:

You can save as many scenes as you want, and switching is lightning fast. Want to solo just the drums with that new reverb? Just save a scene and recall it. Want to make a small change in a scene? Go into Scene Management and update the Scene. 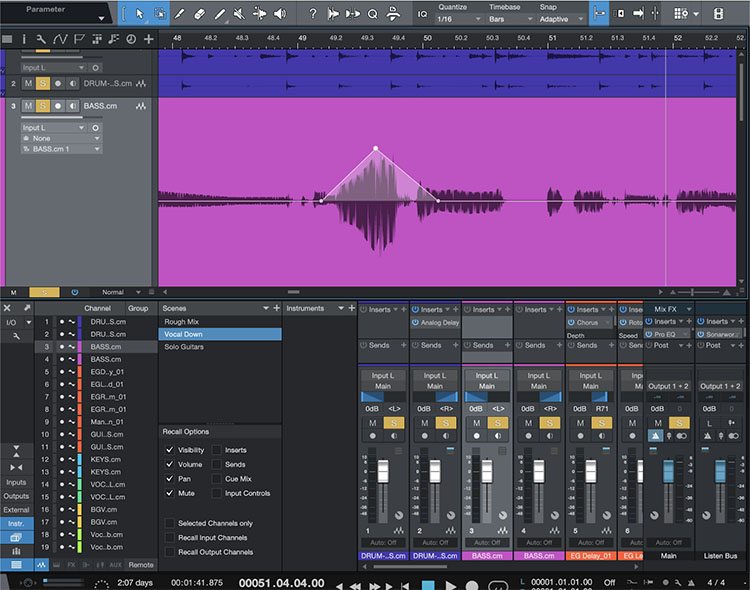 While Clip Gain is nothing new to a DAW, the way Studio One 5 handles them is. Quickly bring sections up or kill those huge breaths before the singer belts a note with ease. Plus, all copied instances of clips will update when you change one part of a clip. So when you copy that drum section all over the song where that one snare hit is too loud, one Clip Gain change and they’re all fixed.

The Aux Channel is a new channel type that gives you the power to use ANY external audio source like you would a plugin. Instead of creating a new Audio Track and tracking that Roland JV-1080 rack in as a permanent audio track, alternatively, you can treat the hardware like a plugin via Aux Channel.

The Aux Channel treats your MIDI like a virtual instrument in Studio One 5, letting you make changes to the performance, patches, and even add native plugins to the signal. You can also set the external device as an External Instrument in the Studio One workspace, and utilize drag and drop it right into the session, just like you would a plugin.

Studio One has many ways to compose as it is. They’ve added Score Editing by integrating their notation software Notion into the Note Editor. Now you can utilize standard notation within Studio One 5 itself. On top of the added functionality, you can use Score Editor on a track-by-track basis, meaning one track can use the Piano Editor, the other a Drum View, and on a different track, the Score Editor. You can edit notes in real-time or step recorded modes. 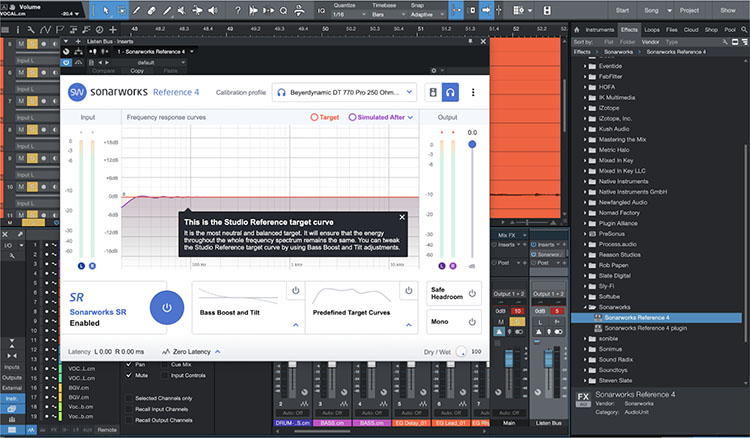 Ever bounced a track to a client, only to realize you left Sonarworks on the Mix Bus? I did this four times last week, and it is embarrassing to have to explain why your mix sounds “worse than the rough mix” to the client. What about when you’re tracking a client but hear something funky in the drums that you want to fix right away? Of course, you can’t go on a soloing spree without distracting the performance. Both of these problems are solved with the Listen Bus. Enabling the Listen Bus gives you the power to solo anything you want without affecting the cue mix. Additionally, you can set up your Sonarworks or IK Multimedia ARC on the Listen Bus and use your calibrated room to mix, then export without having to disarm the software. That’s a win-win in my book. 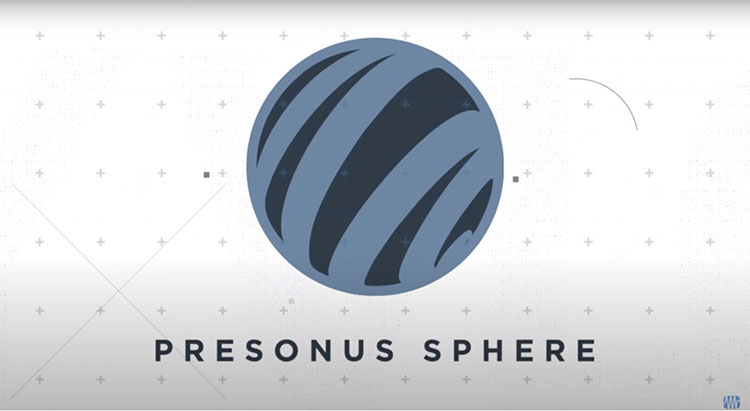 Following the trend of subscription-based services, PreSonus introduced Sphere. Coming in at $14.95, you get access to Studio One 5 Professional, along with every plugin, instrument, and library they have to offer. On top of all of the tricks in the Studio One bag, PreSonus will also throw in special gifts at times for being a subscriber. Lastly, Sphere offers unique masterclasses when subscribed as well.

That’s a lot to take in, right? Change is fantastic, especially when it speeds up workflow. It’s no wonder so many people are jumping ship on other DAWs and making their way to PreSonus Studio One. What do you think about all of the new changes?

Bryan A. Adams is the founder of Everything Recording, a news site that showcases what’s new in Pro Audio. They feature new gear releases, reviews, and exclusive articles.