Additive and subtractive synthesis are two of the 4 fundamental ways synthesizers create sounds, next to wavetable and FM. If you plan to get into synths at all, or even just use them occasionally in your work, it’s a good idea to get familiar with the basics. That way, you can create sounds from scratch or even just fine-tune presets in your virtual instruments!

As the name suggests, additive synthesis creates timbres, or tones, by adding sine waves together.

To better understand additive synthesis, it helps to look at what sounds are actually made of. At the most fundamental level, the noises we hear everyday are not made of a single frequency, or a single pure sine wave. In actuality, what we hear is a sum of frequencies, and each one is a different amplitude.

It’s the same idea with musical notes. When we name a pitch like “C,” we’re referring to the fundamental frequency, but the actual note is made up of more frequencies layered together. Those are what we call “overtones” or “harmonics.” In other words, the fundamental frequency alone is responsible for the pitch of the note, but the overtones define the overall timbre. The overtones of a piano playing middle C are different from the overtones of a violin playing the same note.

Additive synthesis works the same way to build sounds from the ground up. You add frequencies together at different amplitudes to define the overall timbre, or tone, of the synthesizer. These kind of synths have oscillators which usually only use a sine wave. You can build your sound up one harmonic at a time, which means with more oscillators, the more unique and detailed your final sound will be.

The first commercially available additive synthesizer was the Telharmonium released in 1906. It was originally developed by Thaddeus Cahill in 1896 and patented in 1897, and is considered the first electromechanical instrument.

Perhaps one of the most famous early additive synths is the Hammond Organ, which became available in 1935. The Synclavier II was one of the most popular digital synths that came out in 1979.

The difference between additive and subtractive synthesis is that the latter deconstructs sounds rather than building it up. It uses filters to attenuate partials of an audio signal to create the timbre.

Subtractive synthesis can be applied to any source audio signal, but the sound most commonly associated with it is that of ’60s-’70s analogue synthesizers. Those sounded the way they did because the harmonics of sawtooth, pulse, or square waves were attenuated with a voltage-controlled resonant low-pass filter.

Today, many digital and software synthesizers use subtractive synthesis.

As we noted before, subtractive synthesis really came to the forefront of the synth scene in the ’60s. However, synthesizers were still cumbersome, complex, and expensive modular devices at the time. They definitely weren’t accessible by everyday musicians—most were owned by universities or record labels, and by 1970 only 28 musicians owned modular synthesizers. 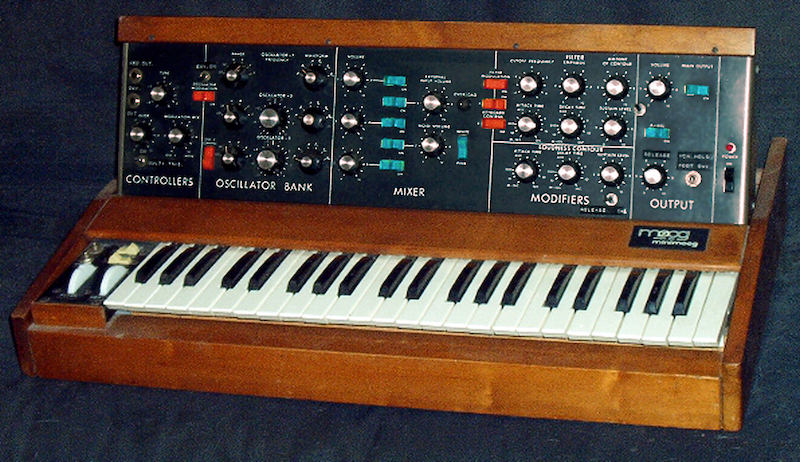 Moog had already been producing modular synths throughout the ’60s, but were certainly aware of the disadvantages of such machines. Enter the legendary Minimoog: the first synthesizer sold in retail stores, designed as an affordable, portable, simplified instrument which combined the most useful components in a single device. It operated using subtractive synthesis!

Subtractive synths often come with multiple waveshapes like sine, saw, triangle, or square. The advantage of waveshapes is that they can generate multiple harmonics, whereas a sine wave is a single frequency. Therefore, the basis of subtractive synthesis is to generate as many harmonics as you’d like, and then use a filter to sculpt the sound.

By understanding the principles of additive and subtractive synthesis, you can start shaping your own unique sounds!