Musicians’ creativity doesn’t come to a halt when they’re on the road. In a perfect world, we’d all have access to the comfort of our home studios 24/7, efficiently churning out music as often as we’d like. But whether you’re a full-time artist/producer or a hobbyist, life’s obligations tend to pull us from the studio hideaway! Luckily, there are plenty of music production apps available, so when inspiration strikes, no matter the place, you can be ready.

We’ll take a look at some of the best music production apps for mobile. Some of them are free, and others aren’t, but they all cater to an ever increasing necessity: quality recordings on-the-go.

Music on the Go (Benefits of Mobile Apps)

The most obvious benefit of having a creative app in your pocket is being able to get ideas out anytime, anywhere. Anyone who does music part-time understands that some song ideas come at the most inopportune times. If you can sneak away for just a moment, pull out your phone, and jot down a quick idea, that’s a massive benefit for any musician.

Another potential plus is this: many of us already spend lots of time on our phones, for better or worse. A music production app at your fingertips could turn unproductive screen time into something a bit more healthy. Instead of scrolling socials for hours, you could play with a music production app and work on your chops.

Finally, some of the restrictions that different apps impose can be great for creativity. Lots of professional musicians and songwriters tell you that an awesome way to beat writer’s block is to strip back to just the bare necessities, like writing a riff using one guitar string. You might find your creativity enhanced when you’re not surrounded by lots of gear in your home studio.

A standard piece of software bundled with Apple computers since 2004, Garageband is a music production mainstay. Intuitive and practical, it was designed with novices in mind; with little to no experience, anyone can grab loops from Garageband’s library and stitch a tune together. Those with more experience can experiment with a variety of virtual instruments or track and edit their own audio. Paired with something like IK Multimedia’s iRig 2, Garageband is one of the top music production apps on the market. And it’s free. 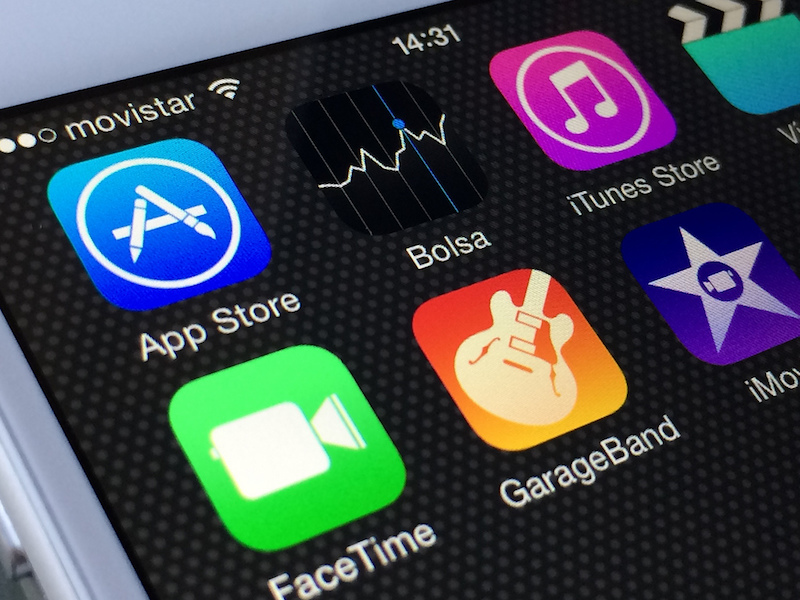 If you’re an iPhone user, the app is probably already installed on your device. If not, simply open up the App Store and download Garageband at no cost. It’s worth noting that it is an iOS-only app, so Android users will have to sit this one out.

Arguably one of the best music production apps available is Auria Pro by WaveMachine Labs. Its user experience is likely one of the closest things you can get to a professional DAW on the iPhone or iPad. At $50, it isn’t free, but it’s definitely a bargain for everything it includes.

Auria Pro operates at 24-bits with sample rates up to 96 kHz, allowing 24 tracks of simultaneous recording with the right audio interface and an unlimited number of total session tracks. It also includes up to 32 internal busses for extensive routing options with full delay compensation. 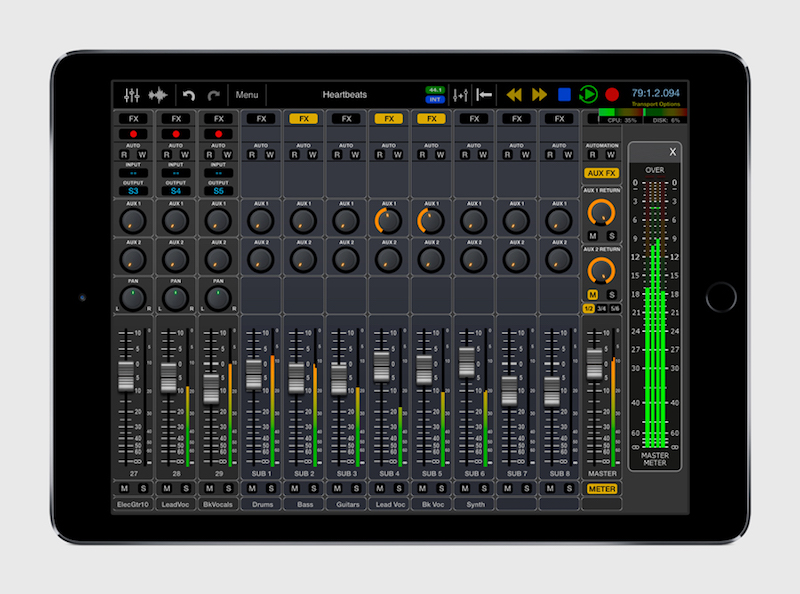 In addition to “pro-level” recording and playback capability, Auria Pro’s MIDI and audio editing is next-level as far as mobile apps are concerned. Two FabFilter synthesizers are packaged with the software, as well as WaveMachine’s own Lyra sampler. A piano roll editor provides a familiar MIDI-editing interface with access to the gambit of MIDI manipulation.

If you’re in need of a serious DAW for mobile, Auria Pro is one of the best you can get. We’ve only touched on a handful of its features here, so you can rest assured it runs like a full-featured desktop DAW.

Cubasis is the “lite,” mobile version of Steinberg’s professional DAW, Cubase. Much like the aforementioned Auria Pro, Cubasis provides one of the closest experiences to a complete DAW on the iPhone or iPad.

Much more powerful than Garageband and slightly cheaper ($30) than Auria Pro, Cubasis offers recording at 24-bit/96 kHz and an unlimited number of audio/MIDI tracks. At a glance, Cubasis includes an impressive loop library and virtual instruments to compose on the run, too:

FL Studio, incredibly popular amongst hip-hop producers, is available in mobile form. And finally, Android users get some love with this one! Like each of the other apps on this list, FL Studio Mobile provides access to high-quality synthesizers and samples, a step sequencer for quick drum programming, and audio recording capability to capture live performances. 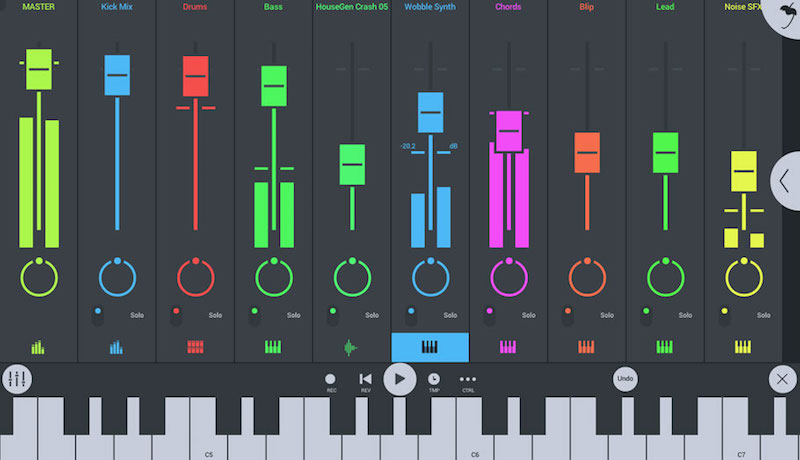 Truly separating itself from other contenders, though, is FL Studio’s multi-platform support. Whether you’re running iOS, Android, or Windows Phone, you can purchase this app at a modest price ($14-16) and hit the ground running.

An excellent choice for hip-hop/electronic-minded users, the company behind Reason produces the Figure app for mobile. Sweden’s Propellerhead developed the software as an easy-to-use beat production app. Though it’s much less powerful than the previous entries, it’s a fun alternative when simple is all that’s called for.

Much like online music production services, Figure users can collaborate and share music with each other on-the-go. Drums, bass, and synthesizers are all there to make beats wherever you are. Check out the highlights below:

This is one of the simplest purpose-built mobile production apps available. Like the name suggests, it gives you an arrangement of drum pads. Sounds come from different preset libraries, and it also gives you access to some basic effects like reverb. You can record your drum beats, upload them straight to your socials, and tag for other members of the community to find. Best of all, it’s completely free.

BandLab is a pretty incredible free DAW for your pocket. Its multitrack Mix Editor lets you record, edit, sample, loop, and mix projects from your phone or other mobile device. BandLab even comes with its own free realtime pitch correction plugin called AutoPitch, and other effects and presets for various instruments.

Soundtrap is a subscription based mobile production app. You can record and edit on any device, access up to 4000 loops and presets, make beats using a drum pad, and more. Everything you work on is stored in the cloud, so you don’t have to worry about backing up files on the go.