In today’s episode, we had the opportunity to sit down and chat with Dweezil Zappa in his home!

This was rather exciting for me because the record “Dweezil” is about to tour is one of the greatest almost instrumental albums of all time “Hot Rats”. – It has one guest appearance by Captain Beefheart in “Willie the Pimp!”

The tour will include Dweezil’s band playing the entire “Hot Rats” album in sequence live on stage along with some other songs that are from his father Frank Zappa’s album called “You are what you is.”

It was inevitable that his life would be filled with music; his father even listed his religion as “musician” on his birth certificate! Dweezil’s early years were spent outside of the public eye.

Although Dweezil was primarily exposed to his father’s music and music his father listened to, at an early age he found himself some new sounds on the radio! He began listening to the Beatles, Queen, AC/DC, Led Zeppelin, Black Sabbath, The Who, and Jimi Hendrix. Like many aspiring guitarists of his generation, he was caught in a stranglehold by the guitar styles of Eddie Van Halen and Randy Rhoads.

He listened to their records for hours trying to figure out how to translate what he was hearing to his fingers on the guitar, “I remember asking Frank to help me figure out the song ‘Revelation/Mother Earth’ from Blizzard Of Oz. I didn’t know anything about chords and in that song, Randy Rhoads was using classical music elements that were new to rock guitar at the time. Frank helped me learn the fingerpicking intro.”

While learning to play Dweezil was fortunate to have some assistance from one of the musicians in his father’s band at that time, Steve Vai. Dweezil became remarkably proficient in a very short amount of time due to his intense practicing sessions.

“Steve made a notebook, which I still have, of scales and exercises and I practiced the stuff from that book at least 5 hours a day.” At the age of 12, he made his first onstage appearance with his father’s band at the Hammersmith Odeon in London. “That was a great experience. I was so excited to have been asked to play but I was incredibly nervous. Since I could only really play the lead in the key of A, Frank devised a hand signal for the band to modulate the song ‘Stevie’s Spanking’ down to A from its original key of B. After I finished my solo he gave the cue for the band to modulate back up. It was so cool how he had so much control over the music, it almost seemed like a magic trick to me. It made a big impression on me and has stuck with me my whole life.”

Later that year he recorded his first single, “My Mother Is A Space Cadet”, released on Frank Zappa’s Barking Pumpkin label.

In 1984, Dweezil contributed guitar solos to both “Stevie’s Spanking” and “Sharleena” on Frank’s album “Them Or Us.” In 1986, Dweezil made his debut in Hollywood as an actor with his role in the film “Pretty In Pink”. Over the next year he scored a role alongside Arnold Schwarzenegger and Mick Fleetwood in “The Running Man”.

In television, he worked as a regular rotation guest MTV VJ. During that same period, he recorded and released his first full-length album, “Havin’ A Bad Day.” This album contained the single “Let’s Talk About It” which featured Moon Zappa on vocals.

In 1988 Dweezil signed a deal with Chrysalis Records, releasing his second album “My Guitar Wants To Kill Your Mama”. The title track and video, a cover of the Frank Zappa single, found it’s way into the MTV rotation and in 1990 Dweezil and Moon Zappa starred with Laverne And Shirley legend, Cindy Williams, in a sitcom for CBS titled Normal Life.

With the release of his third album “Confessions” in 1991, Dweezil began to branch out musically, blending his heavy rock approach with touches of his father’s distinct compositional insignia.

In 1996 Dweezil had several projects including composing the theme music for the Emmy Award-winning Fox television show “The Ben Stiller Show”, on-camera TV appearances including taking the role of Ajax in the Klasky Csupo, animated series Duckman, and a TV series for the USA network called Happy Hour, which he starred in alongside Ahmet.

In 2000 Dweezil issued his first solo album since 1991’s Confessions… with the release of “Automatic”. By this time, Dweezil’s musicianship had come full-circle as he showed off his guitar virtuosity with eclectic all guitar orchestrations of “You’re A Mean One Mr. Grinch” and “Hawaii 5-0.”

In 2003 more television work came about as Dweezil formed a band for the WB unconventional improvisational comedy “On The Spot” and performed live in each episode. He also composed the theme music for the WB series “The Jamie Kennedy Experiment” and composed dozens of tracks for the music library “Extreme Music.” Many of these tracks are heard on various television shows around the world.

The next several years saw Dweezil preparing to take on an extremely difficult challenge—bringing his father’s legendary music back to the concert stage. In 2006, some indication of what could be expected surfaced with Dweezil’s next solo album “Go With What You Know.”

The album featured Dweezil’s most creative, advanced guitar work to date and he was aided by keyboardist Aaron Arntz and bassist Pete Griffin, who would soon become involved in the live band Dweezil was putting together. 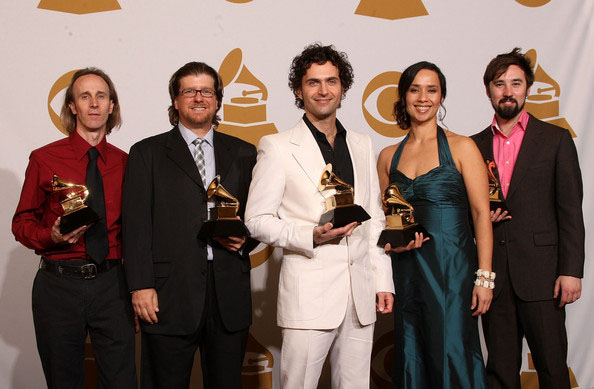 Finally, in the spring of 2006, Dweezil’s new live band Zappa Plays Zappa hit the road for their first tour. Playing along, an ambitious set of Frank Zappa favorites and obscure gems to big audiences of crazed Zappa fans, Dweezil proved that he could reach his goal to form a core band of previously unknown expert musicians capable of respectfully executing his father’s music. He was uniquely qualified to bring these compositions back to life with complete authenticity from the page to the stage. Helping to deliver the goods was his stellar band of first-rate musicians including brass/woodwinds/keyboards/obvious fan favorite Scheila Gonzalez among others.

Without a “cosmic crystal ball,” it was impossible to see to how far into the future this project would last. Bearing that in mind Dweezil decided to add some extra frosting to the cake and invite some former FZ band members to join him on the inaugural tour. The earliest ZPZ tour included band alumni Steve Vai on guitar, Napoleon Murphy Brock on tenor sax and lead vocals and Terry Bozzio on drums.

In 2008, this project netted Dweezil his first Grammy Award win for Best Instrumental Performance for its version of the Frank Zappa classic “Peaches En Regalia”.

Dweezil has developed his online guitar course for students. It’s branded as “DWEEZOLOGY” and is available at truefire.com.

November 27th, 2015 marked the release of Dweezil’s first new album since “Go With What You Know” in 2006. Dweezil Zappa returned to his musical roots with his new CD release “Via Zammata’“.

In 2016, Dweezil found himself in a conflict which resulted in a name change for Dweezil’s touring project. Dweezil stopped using the name Zappa Plays Zappa and now continues to make music and tour under his name, Dweezil.

The current band lineup is Dweezil’s favorite so far. “This is the best version of the band I have ever had. The musicians can tackle the hardest instrumental passages and cover a limitless range of vocals.”