Eric Boulanger is a GRAMMY-winning mastering engineer, founder of The Bakery studio, and an accomplished studio violinist. His unique talent has afforded him the opportunity to spend time in both the studio as well as on stage. Eric began studying classical violin at 3 years old and has accrued over twenty years of professional experience as a musician. He has also trained at renowned institutions, including Juilliard and the Manhattan School of Music. As an exceptional mastering engineer, Eric has worked on numerous GRAMMY-winning/nominated projects by Green Day, Selena Gomez, Imagine Dragons, Neil Young, and Rufus Wainwright, amongst many others.

Eric serves as a leader of the Producer & Engineers Wing of the Recording Academy, and was additionally the first engineer to work on a “Mastered for iTunes” release (Colbie Caillat’s All of You). The MFiT initiative sought to improve the quality of masters delivered for digital release and has been successful in its initial endeavor.

Eric studied electrical engineering at Carnegie Mellon to pivot away from the musical studies he had pursued his entire life. During one of his summers in college, he recalls visiting Los Angeles and working through a list of studios in a phone book, asking each of them for an internship. After a slew of rejections, he eventually reached Nick Dofflemyer at Universal Mastering who invited him for lunch the following day. The meeting went well, and Eric found himself in a mastering session at Capitol Studios alongside Nick and engineer Pete Doell.

His journey into becoming a mastering engineer really began when he started as Capitol’s first-ever intern. Surprisingly, over the course of its illustrious history, Capitol Studios had never hired a single intern. This was likely due to the studio being union-run, where the traditional unpaid intern would be against regulations.

After an entire summer of cleaning and maintaining equipment, Eric had the opportunity to work with legendary producer/engineer Al Schmitt. Al became Eric’s first professional mentor, eventually guiding him to join The Mastering Lab. Founded by GRAMMY-winning engineer Doug Sax, The Mastering Lab was the world’s first ever independent mastering studio. After joining the studio, Eric had the opportunity to not only be trained by Doug himself, but also to design and maintain the entire facility.

When vinyl mastering was resurrected in 2009, Eric designed and built the Lab’s vinyl mastering room, which included a hi-res passive console. His time spent with Doug at The Mastering Lab has played a huge part in what Eric’s own studio, The Bakery, has become. 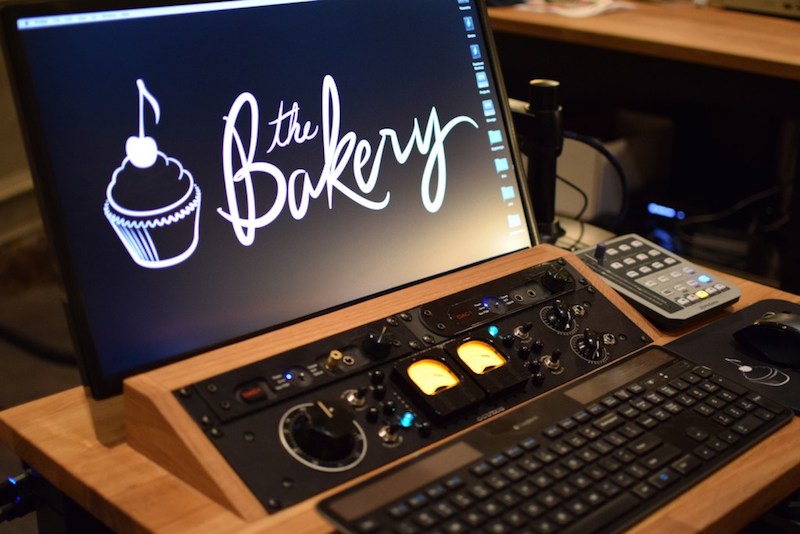 Doug Sax’s influence permeates The Bakery’s whole philosophy, which is to maintain Doug and The Lab’s own 45 years of mastering excellence.

The Bakery’s mastering signal flow features an array of custom equipment. From tape machines to EQs, compressors, limiters, converters, monitoring amps, and console, each unit is custom-designed and built for the best possible audio mastering experience.

Even though high resolution download is more popular than ever before, mastering for CD is still a major part of the work done at The Bakery. The studio offers DDP format transfer to clients and CD manufacturers, as well as WAV masters at the client’s discretion.

Eric spearheaded The Mastering Lab’s return to vinyl mastering, designing and building the studio’s vinyl facility in 2009. He has since transferred the art to his own studio, where clients can take advantage of vinyl cutting, reference lacquers, and master lacquers.

Again, the vinyl mastering equipment is all custom-designed and built for absolute sonic excellence. The Bakery utilizes a custom half-speed cutting system to offer the best reproduction of an artist’s work for the vinyl medium.

Over 200 million records have been pressed from The Bakery’s master lacquers. This makes the studio’s cutting system the best in the world, having more records nominated for Engineering GRAMMYs than any other.

As previously mentioned, Eric was the first engineer to work on an MFiT project with Colbie Caillat’s All of You album. The unique format was the result of a collaboration between Apple and the National Academy of Recording Arts and Sciences, intended to improve the quality of digital downloads.

Eric Boulanger is an exceptional mastering engineer, who’s persistence and talent have afforded him incredible opportunities alongside the industry’s greats, and numerous GRAMMY awards and nominations. Likewise, The Bakery’s commitment to mastering excellence makes it one of the world’s premier facilities—a testament to Eric and his team’s skill and dedication.