Luckily, though, FM synthesis can easily be broken into digestible chunks which will help you better understand how it works. And once you’ve got the basics down, you can start using frequency modulation to create your own sounds!

What is FM Synthesis?

FM synthesis can create both harmonic and inharmonic sounds. For synthesizing harmonic sounds, the modulating signal must have a harmonic relationship to the original carrier signal. As the amount of frequency modulation increases, the sound grows progressively more complex. Through the use of modulators with frequencies that are non-integer multiples of the carrier signal (i.e. inharmonic), inharmonic bell-like and percussive spectra can be created. (Source)

A Brief History of FM Synthesis

Frequency modulation was first discovered by Robert Chowning at Stanford University between 1967 and 1968. It wasn’t patented until 1975 and was previously licensed to Yamaha in 1973. FM was actually first designed for to transmit voice over radio, which is how FM radio got its name.

After Chowning developed frequency modulation, engineers at Yamaha started using his algorithm to design the first commercially produced FM synthesizer. The team added improvements like the “key scaling” method to minimize distortion that normally occurred during frequency modulation. However, it would be several years before Yamaha started releasing their FM digital synthesizers.

FM synthesis was the basis of some early generations of digital synths, and Yamaha was at the forefront of their development. In 1983 they released the DX7, which is one of the most popular digital synthesizers ever made. It was on everything in the ’80s!

The Building Blocks of Frequency Modulation

The fundamental component of FM synthesis is an operator. An operator is a building block of frequency modulation synthesis, and consists of four parts: an input, an oscillator, an amplifier, and an output.

An operator’s input feeds into the oscillator’s pitch.

Oscillators are a common building block other types of sound synthesis as well. What an oscillator does is generate and output a waveform. The waveform has an adjustable frequency and an adjustable waveshape (e.g., sine, sawtooth, square, etc.).

An amplifier controls the level of the signal coming from our oscillator.

Output to Input: Putting the Pieces Together

FM synthesis creates sound using multiple operators. This is possible because the output of one operator can be fed into the input of another. This modulates the pitch of the second operator with the output from the first.

Let’s say we have a very simple arrangement of two operators called A and B. Operator A would be responsible for generating a signal to modulate the pitch of Operator B’s oscillator. What we actually hear is the output of Operator B, which itself is technically the sum of A and B.

Most FM synthesizers have at least four operators to create sounds.

With FM synthesis, it’s usually best to use simple sine waves as modulators. The frequencies modulate at a very high rate, so things can get out of hand pretty quickly with more complex shapes. If a modulator signal has a lot of frequency content the final sound can be pretty terrible, which is why most FM synthesizers offer simple waveform shapes exclusively.

Just like Robert Chowning did in his research, a really common technique in FM synthesis is to use sine waves to modulate each other. You can achieve this with three or more operators—you’ll have the ability to create complex sounds while still retaining control because you’re using simple sine waves.

Try FM synthesis yourself with Dexed 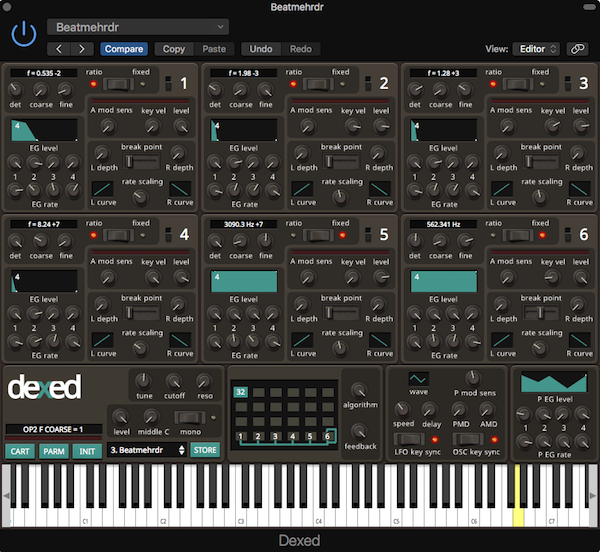 Dexed is a free VST modeled on the original Yamaha DX7. The best way to learn about frequency modulation is to get hands-on! The following features are available from the developers:

Interestingly, the actual Yamaha DX7 manual can be used as a reference for working with Dexed!

If you are looking to learn more about synths, check out the following related resources:

Thanks for reading, and have a marvellous day!