How to Record Drums at Home in 5 Easy Steps

Usually the biggest challenge recording at home is the drum kit. There are so many straightforward ways to capture other instruments that sound great—but there isn’t much flexibility with acoustic drums. First you need the space, which is a challenge in and of itself. From there you need a lot of microphones, enough mic preamps, and more. We’ll take a look at how to record drums in a number of different ways at home!

What gear do you need to record drums?

That’s the number one question, and what you have will ultimately determine your approach to recording drums. We’ll highlight the 6 most basic steps soon, but first we’ll cover some tried and true industry standard drum mics to have in mind. It’s preferable to have at least 8 microphones to capture drums in the most detail, which means you’d also need an interface with 8 preamps.

An affordable 8 pre interface is the Focusrite Scarlett 18i20. A premium 8 preamp interface is the Universal Audio Apollo x8p. You don’t necessarily need 8 preamps because there are ways to record drums with as few as 4, or even one, microphone. More on that later, as it factors into our easy 5-step approach; but if you have the means, it’s preferable to close mic each part of the kit!

The Shure and AKG listed here are designed for excellent low-end reproduction and high SPL tolerance. Even the shape of the microphone lends itself to ideal placement on the kick drum. The RE20 is typically considered a broadcast microphone, but it also has a detailed and rich low end that can capture kick beautifully.

Most engineers prefer large diaphragm condensers as overheads and room mics. This is probably the most flexible category of drum microphone, so whatever you have or is within your budget will make do. Obviously, a pair of AKG C414s or Neumann U87s works incredibly well, but those are usually way beyond the home studio budget.

Something like the Audio-Technica 4033 would be a perfect affordable alternative. Even the very inexpensive AT2035 could make for a good pair of drum overheads. 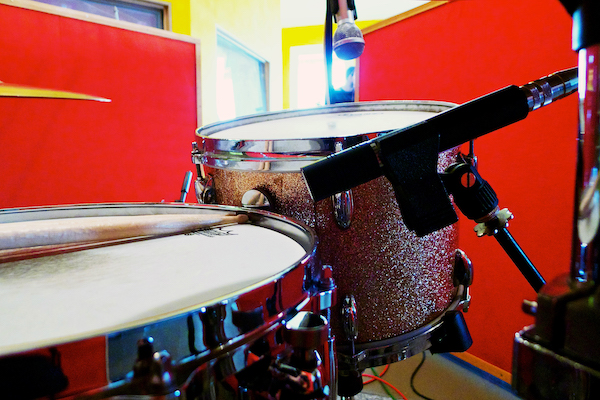 The gear listed above is enough to close mic every part of the kit for the most detailed representation. However, that isn’t necessarily the easiest way to record drums at home, and you can still get a great sounding kit with fewer microphones involved.

Bonus: How to Record Drums with One Microphone

Perhaps the ultimate DIY home studio technique is recording drums with a single mic! One of the biggest advantages is being immune to phase cancellation and the headaches that presents with a multi-mic setup. You also get the sound of being in the room with the drums, which is ultimately what a lot of engineers are striving for anyway through a fully miked kit. 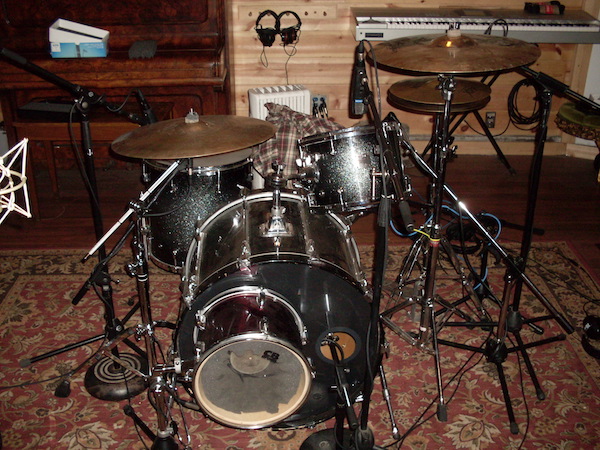 Recording drums at home doesn’t have to be an overwhelming (or even expensive!) task. With just 4 microphones, you can get a perfectly adequate representation of the kit with enough oomph and crack from the kick and snare to set the foundation for the song.