Fourteen years ago, Apogee revolutionized audio interfaces. The original Duet combined professional quality with portability in a never-before-seen way which changed the digital recording landscape. Over the years, they’ve consistently improved the original design, and in 2021, the Apogee Duet 3 undergoes an elegant transformation.

Since the company’s origin in 1985, Apogee has been a leader in digital audio technology. The company’s first product was a set of anti-aliasing filters used in Sony and Mitsubishi digital recording systems. In the early days of digital, CDs sounded harsh and brittle—something Apogee sought to fix. These initial products brought analogue warmth and softness to the sterile CD medium, and ultimately helped many professionals embrace emerging digital technology.

Apogee is an innovator. Their mission has always been to make digital sound amazing, and the Apogee Duet 3 is undoubtably rooted in that tradition.

At first glance, the latest Duet interface is a huge improvement over the last generation. The iconic portable and desktop interface is sleeker than ever. Surely sound quality is the top priority, but a gorgeous design certainly doesn’t go unnoticed. The brand new Duet 3 is thinner now for even more portability, and continues to sport one multipurpose control knob like previous generations. An aluminum chassis and scratch-resistant glass top houses Apogee’s hardware DSP and award-winning converters for the best-of-the-best in streamlined audio interfaces.

The Apogee Duet 3 is a 2-in/4-out desktop or on-the-go audio interface. Part of what makes the Duet a perfect portable interface is its proprietary breakout cable design. It’s essentially an audio snake containing all of the interface’s I/O in a single connection: 2 XLR inputs going to Apogee’s industry-leading preamps, 2 1/4″ inputs, and 2 1/4″ monitor outputs. Of course, there is also a 1/8″ headphone output on the front of the interface. All of this keeps the form factor to a minimum; disconnect the breakout, roll it up, and throw everything in a backpack. A travel case is included.

The Duet 3 is bus-powered via USB-C and is compatible with both Mac and Windows machines. The Apogee Duet 3 hardware DSP lets you record through any of the Apogee FX with no latency, either printing the processing or just monitoring it. The Symphony ECS Channel Strip is sold separately for $99, or $49 when bundled with the interface.

In terms of features and performance, the Duet 3 and 2 are quite different. When the Duet 2 came out nearly 10 years ago, it was a groundbreaking device in terms of quality and form factor. It was also a major step up from the original Duet released in 2007. Following the tradition of optimizing and refining for each generation, the Duet 3 is a hefty step up from a nearly decade-old interface. Apogee’s industry-leading preamps and converters have always shone bright, but the Duet 3 makes use of the highest quality components of 2021—not 2012.

The Apogee Duet 3 also expands I/O, offering 2 1/4″ line inputs in addition to 2 XLR inputs. The Duet 2’s breakout cable originally offered 2 combo jacks and 2 1/4″ monitor outputs. Other major improvements include brand new onboard DSP. The Duet 3 has slimmed down quite a bit too, ditching a 1/4″ headphone output for a 1/8″ connection instead. The overall look and feel is modern, premium, and an overall upgrade over the Duet 2. 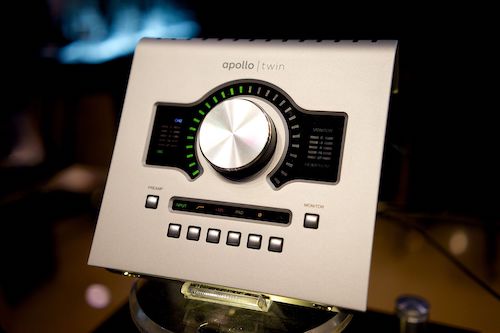 While an apples to oranges comparison in many ways, some shoppers struggle between the choice of Apogee or Universal Audio. The new Duet 3 is at least more readily comparable to an Apollo Twin in the sense that it now has DSP power for Apogee FX plugins—similar to UA’s DSP included in every interface, along with access to a starter’s kit of incredible UAD plugins. Unfortunately, Apogee’s FX are sold separately at this time.

That’s where the similarities end, however. The Apogee Duet 3 is sleek and travel-ready (case included) thanks to its breakout cable and streamlined design. The UAD Apollo Twin offers expanded I/O at the expense of a larger footprint, and it also requires an external power supply.

Both are best-in-class, premium audio interfaces. If portability is your main concern, you can’t go wrong with the Duet 3. If expanded I/O and flexibility is a priority, an Apollo Twin is a fantastic choice (plus, you’ll get access to a free bundle of great UAD plugins).

How to set up Apogee Duet

The Duet 3 is plug-and-play for the most part. You’ll need to download the Apogee Control 2 software, but that’s a painless part of the initial set up. The software allows you to control all of the Duet’s functions from a single virtual window, and also keeps your device up to date. For comparison, it functions similarly to Universal Audio’s Console software.

The Apogee Duet 3 is a clear upgrade from the last generation. With onboard DSP, USB-C connectivity, and expanded I/O, this professional interface offers portability and quality that’s hard to find elsewhere.