The Resynator is a monophonic pitch-tracking synthesizer with a pretty remarkable story. The instrument-controlled unit was invented by Don Tavel in the ’70s to track the pitch of any instrument plugged into it and produce synthesized sounds. As the world’s first synthesizer of its kind, the Resynator was way ahead of its time, but unfortunately never saw the proper production and distribution it deserved.

Development of the Resynator started in 1974.

Don Tavel first began work on the synthesizer in 1974 using pitch-tracking code he invented himself. The original name for the device was the Pedal, which would evolve into the Resynator over time. By 1977, Tavel had a completed a prototype which he began shopping around at various conventions. 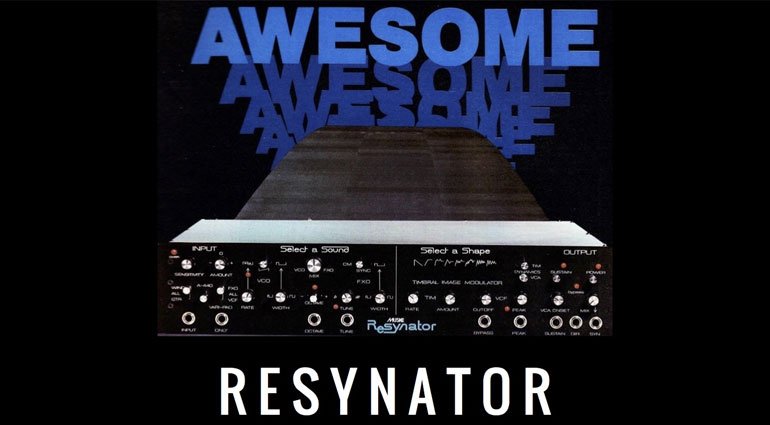 The following year Tavel had partnered with Mike Beigel—creator of the famed Musitronics Mu-Tron envelope filter used by Bootsy Collins, Stevie Wonder, Jerry Garcia, and Frank Zappa, amongst others.

The prototype of the Resynator was initially in floor pedal format, so Tavel and Beigel paired up to finalize the design and bring it into production. In 1979, the two started to redesign the pedal into a rackmounted unit to meet popular demand.

When the rackmount synthesizer was complete, Resynator reviews and ads began showing up in music magazines across the United States by 1980.

Once word about the Resynator had gotten out in various publications across the country, Peter Gabriel’s own Syco Systems put in an order for 3 units. By 1981, word of the synthesizer was making its way around the UK and Europe via Syco Systems magazine ads.

However, in 1982, production of the original rackmount Resynator stopped when Tavel and Beigel started working on a polyphonic version of the synth. They had a prototype of the design (called the HexSynator) by 1984, but everything would come to a halt just several years later.

Inventor Don Tavel was tragically killed in a car accident in 1988, leaving behind a wife and 2-month-old daughter.

In the wake of his passing, the Resynator all but completely disappeared. But in 2014, his daughter Alison rediscovered her father’s invention in her grandmother’s attic, where it had been stored since Don’s death. In Alison Tavel’s own words:

“When I was 23, I began working for Grace Potter as a tour assistant. Grace is my hero and one of the most talented humans I’ve ever met. Over the years of touring and being around musicians constantly, it would come up in conversation that my dad invented a synth, but I didn’t know anything else about it – I truly didn’t even really understand what a synthesizer was. Eventually when we had a few weeks off tour in 2014, I flew to Indiana to get it.”

Alison Tavel is now connecting with the father she never got to know through the synthesizer he created.

She took the unit back to LA and reconnected with Mike Beigel. At first, she just wanted to better understand the synthesizer—what it was, how it worked, and if it was even worth resurrecting!

Alison Tavel has since undertaken the project of bringing her father’s Resynator back. Though not a documentarian, she wanted to film the process, and it has become so much more than she anticipated at the start:

“The synthesizer my father invented was an extension of himself…I didn’t know how to play it or understand it. Fortunately, working in music, I had some really awesome connections to people who could play it and help me to understand it…People like Eric Valentine, Grace Potter, Gotye, Brian Kehew, Will Gregory, Adrien Utley, Mike Gordon, Fred Armisen, and more, were so generous with their time to sit with me and demo it.”

Alison’s documentary is supported by a Kickstarter campaign to fund the ongoing project.

The campaign has raised over $60,000, and the documentary has a projected release and distribution period of early 2021. One of pledge rewards offers studio time at Eric Valentine’s Barefoot Recording with the original Resynator!