What is a Synthesizer? A Comprehensive Guide

Synthesizers have never been more popular than they are now. They currently play a dominant role in the production of the world’s most in-demand music. Synthesizers are the sound of pop, hip-hop, EDM, and more. But you certainly wouldn’t be alone if you’ve ever asked yourself, “what is a synthesizer?”

What is a Synthesizer?

A synth is an electronic musical instrument which can produce sound by generating different signals. We tend to picture the analog or digital synthesizer when we think of them — a keyboard with complex arrangements of knobs and buttons.

Modular synthesis is another type of analog synthesizer. They look like little boxes with lots of patch cables hanging out of them, flickering lights, and of course, mysterious knobs and buttons.

In the software realm, synthesizers are plugins. They create sounds that can be triggered by a MIDI keyboard in a DAW. Some DAWs have a “musical typing” feature which turns a QWERTY keyboard into a piano keyboard to play software synths.

What they all have in common is the manner in which they generate sound. Ultimately, synths produce waveforms, then manipulate those to achieve musical sounds or textures.

A brief history of the synthesizer

The Hammond organ, released in 1935, was the first electronic instrument to become popular. It’s considered a precursor to modern synths.

Another early synth-like instrument was RCA’s Mark II Sound Synthesizer. This instrument came out in 1957 and read punch cards that controlled a synthesizer made of 750 vacuum tubes. It sounds barbaric by today’s standards!

Later, engineer Robert Moog revolutionized electronic instruments. The dawn of the modern synthesizer is considered 1964 to around the mid-1970s. Naturally, it started with the Moog synthesizer’s release in 1964.

His instrument contained individual modules which generated and shaped sounds, and the modules connected to each other via patch cables. Robert Moog also invented a way of controlling pitch through a voltage-controlled oscillator. This was totally revolutionary for the time!

In 1970, the Moog company put out the first synthesizer ever sold in music stores: the Minimoog. As its name suggests, it was a smaller, more affordable alternative to the first Moog synth.

Ultimately, Moog standardized the modern synthesizer market. He introduced envelopes, noise generators, filters, and sequencers. All of these are primary synth components still used to this day.

By the 1980s, the synthesizer market was booming. Yamaha invented the first successful digital synthesizer, the DX7, in 1983. And to this day, it remains one of the best-selling synths in history. This led to fierce competition between companies to develop competing digital synthesizers.

Seeing Yamaha’s success, Roland developed the D-50 in 1987. It was the first mass-produced digital synth with built-in effects such as reverb and delay.

How Do Synthesizers Produce Sound?

Virtually every synthesizer is comprised of 4 building blocks:

Oscillators create waveforms such as sine, sawtooth, square, or pulse waves. Sine waves are the most basic waveform, representing a single pitch with no harmonics above or below it. Some DAWs, like Pro Tools, have simple sine wave generators where you can hear what they sound like.

Interestingly, sine waves do not occur in “real life.” They’re purely artificial, as no sound in nature occurs as a pure pitch!

Filters are probably the easiest synth component to understand. If you’ve done any mixing with EQ, you’ve already used them! In the synth world, filters are just built-in EQs to shape oscillators’ tones.

There are two main types of filters:

High-pass filters cut out the low-end of a sound. The nomenclature is a bit misleading because it has “high” in the name, but you can think of it in literal terms of ‘letting the high frequencies pass through.’

On the other end of the spectrum, low-pass filters cut the high-end. Again, you can think of this as ‘letting the low frequencies pass through.’

Depending on what you’re going for, filters are powerful sound-shaping tools for a synthesizer.

LFO stands for low frequency oscillator. They produce sound waves so “slow and low” the human ear can’t even hear them. We’re talking below 20 Hz! Because of this, synthesizers don’t use LFOs in the same way they use regular oscillators to generate pitch and timbre.

Instead, LFOs modulate a signal to create effects like vibrato, tremolo, and phasing.

For example, if you wanted your synthesizer sound to fade in and out over time, you could use an LFO to create a tremolo effect. Tremolo designates a fluctuation in the volume of your signal.

Or if you wanted your pitch to modulate up and down, inserting an LFO can create a vibrato effect.

ADSR stands for attack, decay, sustain, and release. It’s sometimes shortened to just “envelope.” Here is a simple breakdown of a sound’s envelope:

Appropriately setting the ADSR is key to creating the sound you want. Specifically, you should think about how the ADSR should look for a certain sound.

If you want a sharp staccato type sound, you’d want the attack, decay, and release to be very short with little sustain. You can even create percussive type sounds with these settings.

But if you want a slow-rolling pad, a long attack, decay, and release with lots of sustain will help you get there.

Now that you understand synthesizer building blocks, we can take a look at the different kinds of synths.

Analog vs. Digital vs. Software Synthesizers 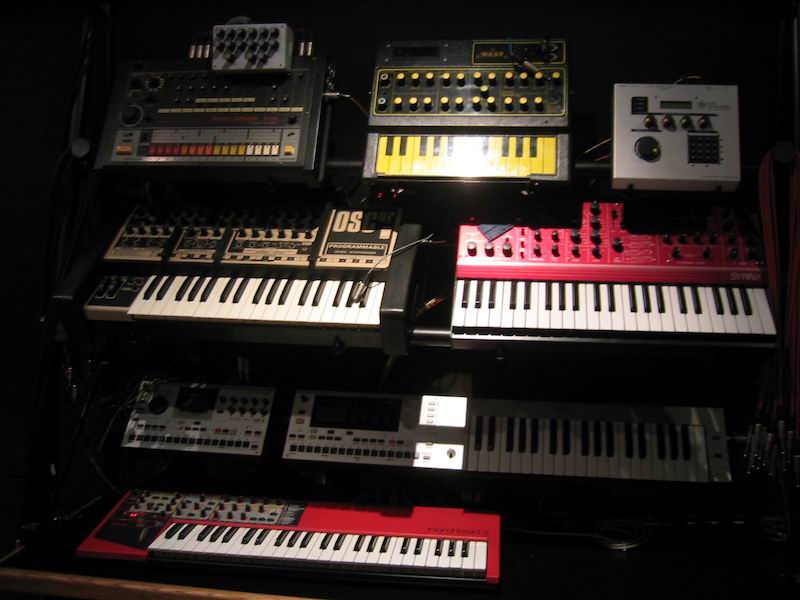 Over the years, synths have evolved to produce sound in a number of different ways. A lot of this has to do with the advent of digital technology in the ’80s, and the further development of modern digital recording as we know it today.

Analog synthesizers were the first ones ever made. The earliest mention of the word ‘synthesizer’ associated with an instrument goes all the way back to 1906; however, these synths would not be considered such by today’s standards.

These instruments used analog circuits and signals to produce sound. ’60s and ’70s synthesizers fall into this category, so bands like Pink Floyd and The Beatles made use of this early technology.

Most analog synths back in the day were huge, expensive, intimidating stacks of knobs and patch cables that were wildly impractical for the average musician! The analog Minimoog was certainly a step in a more consumer and musician-friendly direction.

This made them not only portable, but affordable as well. Now synthesizers were accessible to virtually anyone and became synonymous with the sound of the ’80s. Moreover, digital synths could model their analog predecessors, too, depending on the flavor required.

Yamaha’s DX7 is one of the most famous digital synthesizers ever made.

This is where we are today. Everybody has a computer at home, which means everybody has the ability to record music. Naturally, software synths developed and integrated into the modern recording workflow.

At first, software synths were designed to model their analog or digital counterparts. But over time, developers realized they could explore completely new ways of synthesizing sound through software.

If you have a DAW you use regularly, you probably have access to incredibly powerful software synthesizers as well!

The Different Types of Synthesizers

We talked earlier about the basic components of every synthesizer. The very first part of the chain includes oscillators that generate waveforms to create pitch.

Well, synthesizers don’t just layer waveforms randomly. There are a number of ways synths actually ‘synthesize’ sound, and they are often categorized by their style of synthesis in addition to being analog, digital, or software.

Additive synthesis creates timbres, or tones, by layering sine waves together. These synthesizers combine frequencies at different amplitudes to define the overall quality of the sound.

Additive synth oscillators usually only produce a sine wave. Users build tones up one harmonic at a time, which means with more oscillators, the more detailed the final sound will be.

On the other hand, subtractive synthesis deconstructs sounds. It uses filters to attenuate parts of the signal to create the timbre.

FM stands for frequency modulation synthesis. It uses a modulator signal to change the pitch of a different signal called a carrier. This creates new pitch/frequency information that determines the overall timbre, without using filters.

Robert Chowning discovered FM synthesis in the late ’60s. Yamaha then got ahold of the technology in the ’70s and worked extensively to develop it.

In 1974, the company built the first prototype FM digital synthesizer. In 1980, they finally released the first commercial FM synthesizer — the GS-1. The DX7 falls into the FM synthesis category as well!

Wavetable synthesis occurs in digital and software synthesizers to produce natural, note-like sounds. It samples an existing instrument’s note and then parses it into a sequence of wavetables. Wait, what?

For example, one of the most popular software synthesizers on the market — Omnisphere by Spectrasonics — uses wavetable synthesis. 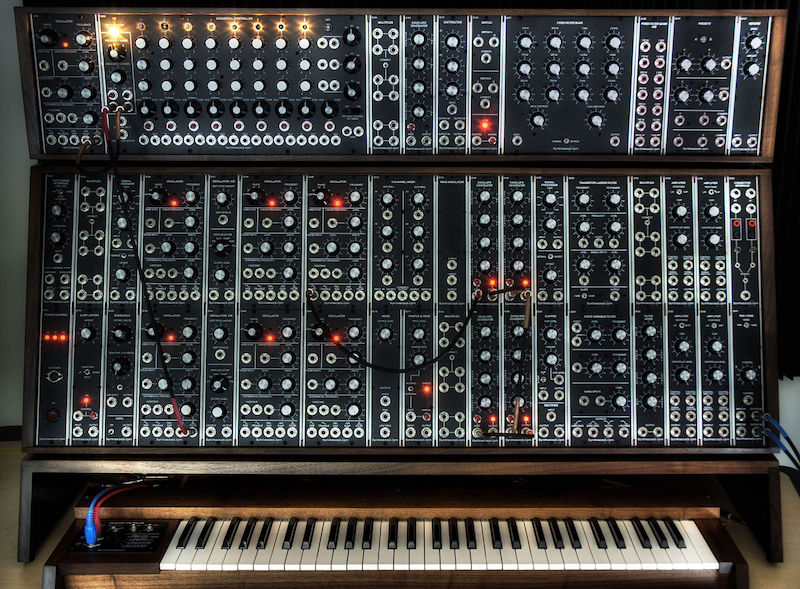 These types of synths are packaged as individual modules. Modules serve as one part of the signal chain — one piece of the synth puzzle. For instance, some units are oscillators, some are filters, some are LFOs, some are envelopes, etc.

Modular synthesizers primarily occupy the hardware domain. But, there are some really cool software recreations of the signal flow and versatility modular synthesis provides.

One great free modular synth is VCV Rack. You can experiment with different modules, signal flow, and everything else modular synthesis has to offer conveniently inside your DAW.

Conclusion: What is a Synthesizer?

Who really knows?? Jokes aside, synthesizers are complex beasts with a rich history of making wonky sounds.

At this point we’ve looked at the different types, and how synthesizers work at the fundamental level; you’ve heard synthesizers at work in popular music throughout the decades.

Now, it’s time to get your hands dirty and synthesize some sounds of your own!