Drum samples and plugins have gotten so good that it’s never been a better time for realistic drum programming. As a matter of fact, it’s totally viable for solo artists to release projects with convincing programmed drums.

But even with incredibly sampled drum kits at your disposal, you still have to understand how to finesse the MIDI information so it sounds human. Otherwise you’ll end up with robotic sounding beats despite using wonderfully recorded acoustic kits.

These are several of the most common drum programming pitfalls and how to avoid them.

1. A human couldn’t play that…

Fundamentally, programmed drums sound realistic when listeners think a real human drummer performed them. While there’s no restrictions on creativity or intent, if you’re going for “real,” your drum programming should center on what’s physically possible by a drummer.

So it’s important to bear in mind the number of pieces a drummer can hit simultaneously is four. That means something like a double bass blast beat with pedal hat keeping time is out of the question, unless your drummer has three feet. This is an extreme example—but you could program something simpler like a crash cymbal overlapping a drum fill, which isn’t physically possible either.

Circling back to “intent” which we mentioned earlier, what you program might be dependent on whether you plan on performing  live as well. Especially if you already have a drummer and you’re just programming for demos, you should focus on writing drum parts your bandmate could actually play.

2. The drums don’t fit the context (overly complex or simple).

This is another thing to be aware of, particularly if you’re new to drum programming or songwriting/production altogether. It’s sometimes easy to get carried away, like we touched on before. The craziest progressive metal drum groove you can think of might not be at home in an indie rock piece. On the other hand, a simple rock beat wouldn’t sound right in a death metal song.

The priority of drum programming should be serving the song. This is just a basic songwriting tip in general, in that context should always be a consideration.

[Check out our 12 songwriting tips that work if you’re interested in more guidance on songwriting!] 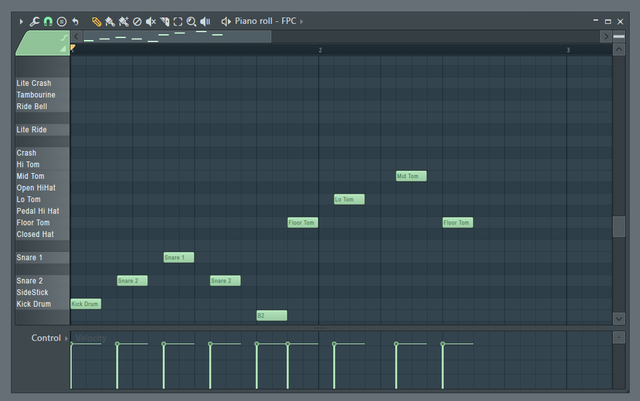 Velocity, velocity, velocity. This is definitely the most important parameter in realistic MIDI drum production. Even the best drummers out there don’t always hit with the same consistency every single time. So keeping everything at 127 will almost certainly draw criticism to your drums.

It’s good to randomize the velocity of things like hi-hat to create a human-like groove an actual drummer would play. You can also play around with accenting certain hits (by increasing the velocity) to completely change the feel of a part.

Ghost notes on the snare are a great way to add human feel to grooves too. Tossing in a very low velocity snare before the main hit is worth trying for that extra touch!

4. Everything is dead on the grid.

This can be genre dependent. If you’re programming electronic drums for EDM, you’ll want it to feel like a metronome. But acoustic drums for rock, metal, etc. should have a little bit of swing in them. Great drummers are practically metronomes themselves, but they’re still human!

Most DAWs give you the option of “swinging” quantization by a chosen degree to offset hits around the beat. A light swing can really liven up your drums; in most cases, perfection is the antithesis of “realistic” when it comes to drum programming.

Unless you want a robot drummer, you probably don’t want to quantize everything for absolute precision.

Most drummers set up their kits for the given gig. In the studio, they might go as far as retuning the drums for each song. In a similar way, you’ll want to make sure you choose drum samples geared for whichever genre you’re writing.

A jazz sample kit probably won’t satisfy if you’re going for a massive rock sound and vice versa. It’s a good idea to consider what tone you’re after and choose samples accordingly. You’ll have slightly less control than if you were recording real drums, but there is plenty of software out there for everybody!

Related: The Best Drum Plugins for Any Budget