The 12 Best MIDI Controllers for Music Production in 2023

Wondering which is the best MIDI controller for you? Take your pick from 12 of the top choices, whether you’re after a portable 25-note controller for production on-the-go, or a full-sized keyboard for ultimate playability.

MIDI is a physical and digital standard of communication between different instruments and computers. It actually debuted in 1983 and hadn’t received a major update until January 2020. That’s how inventive and useful it’s been for nearly four decades.

When we play a MIDI keyboard, for example, we’re using it to control a software instrument in our DAW. The controller sends MIDI data to our DAW and records it. This includes info like pitch, velocity, vibrato, and more. MIDI information itself does not contain any audio—just the info for how something should sound.

One of the biggest advantages of MIDI is how easy it is to edit once it’s been recorded. And since it’s not audio, you can take raw MIDI data and endlessly change the sound by simply changing virtual instruments or patches.

The majority of MIDI controllers are plug-and-play. They usually connect to your computer via USB, and you can start “playing” your software instruments instantly. Many controllers also have extra buttons, pads, faders, sliders, all of which can be mapped to various software parameters for even more physical control.

In all likelihood, the best MIDI controller for you is going to be dependent on keys. Smaller 25-key controllers are excellent to toss in a backpack, but if you come from a piano background, you might want something…a bit larger! 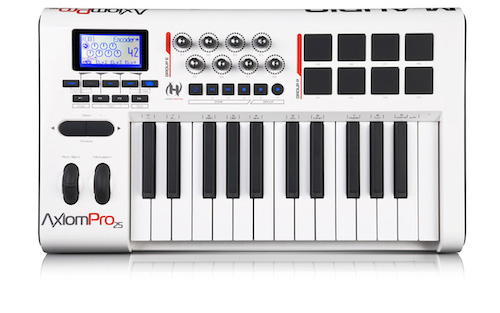 The Axiom Pro 25 is a fully featured controller in a small footprint. It has 25 semi-weighted keys for a professional feel, and it also comes with eight pads, eight rotary knobs, and even transport controls. M-Audio ensures seamless integration with most major DAWs, including Pro Tools, Logic, and Cubase.

The Alesis Q25 shakes most of the “expendable” features for a larger keybed which feels more natural and comfortable to play than other small controllers. It comes with pitch and modulation wheels, as well as a single fader which can be mapped to your most-used software parameter. 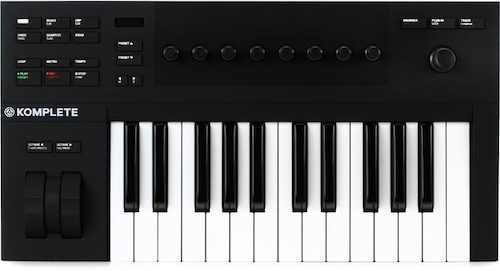 NI’s A25 is a sturdy, professional looking and feeling controller. It comes packaged with Komplete Instruments & Effects software, and automatically maps all of the physical controls to the software based on what you’re using. The keybed is arguably best-in-class, with an extremely high-quality feel.

The Oxygen 49 MK IV is a great entry into a larger keyboard controller. It takes similar features from the Axiom 25 like rotary knobs and pads, and simply incorporates them into a larger format for a bit of extra control. Oxygen 49 also has nine mappable faders so you can start mixing right from your MIDI controller. 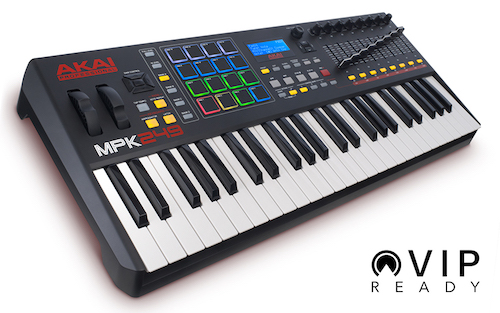 AKAI’s MPK series is one of the most popular lines of MIDI controllers ever. The MPK249 is no exception; this expansive keyboard has something for even the most demanding users. Included are 16 MPC pads with four banks for a total of 64, and 24 additional assignable controls (eight knobs, eight faders, eight switches). The MPK249 may be the best MIDI pad controller on the list as well since it shrinks an MPC down and squeezes it onto a keyboard.

Like the A25, the A49 is the perfect introduction into the Native Instruments world. It, too, comes packaged with essential instruments and effects to get you up and running, including NI favorites like the Scarbee Mark I electric piano (Rhodes). Native Instruments have struck an incredible balance between value and quality with the A49.

The KeyLab Essential 61-key controller by Arturia combines an incredible amount of features with ease-of-use. Among its highlights are pre-mapped faders and pan knobs for mixing, a “DAW Command Center” which controls essential DAW functions, and Arturia’s Analog Lab software with over 6000 synth sounds.

One of Nektar’s major selling points is best-in-class DAW integration. As soon as you plug it in, the Nektar GX61 seamlessly maps all of its functions to software ones, so you have immediate physical control over your DAW. It supports most major DAWs out of the box, with the exception of Pro Tools (but really, who’s programming MIDI in PT anyway?).

Like we’ve seen with both the A25 and A49, Native Instruments’s A61 takes everything that makes the other two awesome and tosses in some extra keys! It comes with the same features, same software, same exceptional quality, and expands playability for the keyboard wizards among us.

Playability is sometimes an afterthought with MIDI controllers. Roland completely dismisses the notion that controllers can’t play like “real” instruments. The A-88 features the same acclaimed keyboard feel as their other instruments, with a sturdy wooden construction that feels like playing a high-end synth. Plus, it has all the expected modern MIDI functionality along with USB-C connectivity.

The expanded KeyLab may be the best 88-key MIDI controller on the list. At the heart of it is a “piano-feel” keybed that feels about as real as it gets. But the KeyLab 88 is actually much more than just a MIDI controller; it’s the centerpiece of any creative workflow, whether in the studio or on the road. For the most demanding professionals and creatives, this thing is  the real deal.

And finally, we have the best value MIDI controller in full-sized format. Like its smaller cousin, the LX88 has industry-leading DAW integration; plus, all of the extras like faders, pads, and more for controllability. For keyboard enthusiasts who want to maximize range without maxing their credit card, the LX88+ is an ideal choice.