The key to getting better sounding vocal takes at home is a DIY vocal booth. Believe it or not, it doesn’t have to be terribly fancy, and it especially doesn’t have to cost a lot of money. If your vocal recordings are suffering but you’re not exactly sure why, you’d probably benefit from a cheap DIY booth.

Why Do I Need a DIY Vocal Booth?

Most genres require the vocalist to be the most prominent element in a mix. Picture performers in a live setting: 9 times out of 10, the singer is center stage, commanding the audience’s attention. The same logic can be applied to vocal mixes. They should be up front, in-your-face, and bold.

You guessed it: the biggest hindrance to a “center stage” vocal mix are poorly recorded vocals. Untreated rooms with a ton of natural reverb are keeping you from getting the best vocal sound you can. A cheap DIY vocal booth can solve much of that problem. It may not be pro studio clean, but it’s guaranteed to be leaps and bounds better than untreated room sound.

It’s easy to be fooled into thinking you can “fix it in the mix.” But that attitude should never get in the way of proper recording technique.

You can toss up a mic in any old room and hit record, but the end result will never be as good as you want it to be. There’s really no way to de-reverb or de-comb filter vocals recorded in a room with a lot of reflections. You can’t just “fix it in the mix.”

Better sounding vocals start with the right room, or in this case, a homemade vocal booth.

There’re actually a handful of different methods people use to record vocals at home. All of them are fairly inexpensive and require little, if any, assembly. Some of them are more effective than others, though, so be weary of the potential pitfalls of certain methods. 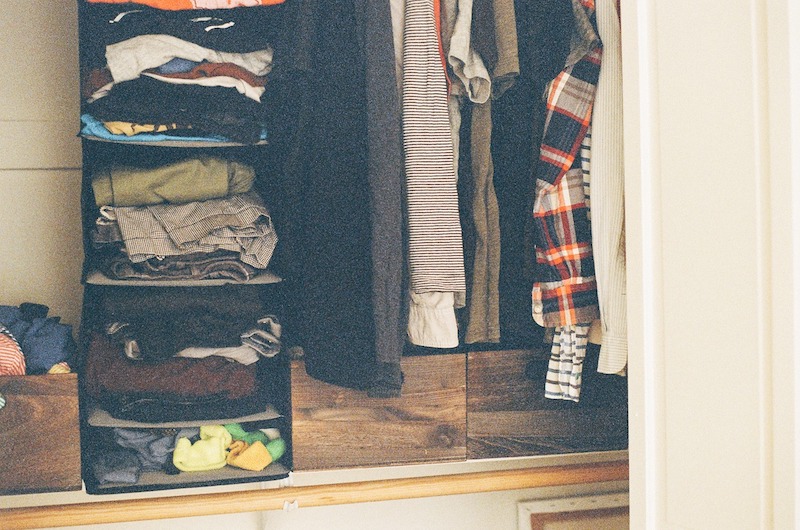 I’m sure we’ve all heard of recording vocals in a bedroom closet. The logic behind it is simple and seems sound enough. It’s a small room with a bunch of hanging clothes that are there to absorb reflections, right? So far, so good.

The biggest misconception of the closet booth is that clothing absorbs a lot of acoustic energy. In reality, only the very highest frequencies with the shortest wavelengths are absorbed by your hanging t-shirts. Even though it’s a small room, much of that room sound is still there because the clothes aren’t doing the job we expect they might.

We think that we can make due with the closet because it is such a small room, with a shorter, almost imperceptible, reverb time. While this is true, the mic is still picking up what room sound is there, making the vocal sound like it was recorded in a tiny room. This is the opposite of the big, up front vocals mentioned before.

Ultimately, the closet DIY vocal booth should be a last resort; it offers minimal absorption, meaning our vocals sound like they were recorded, well—in a closet. 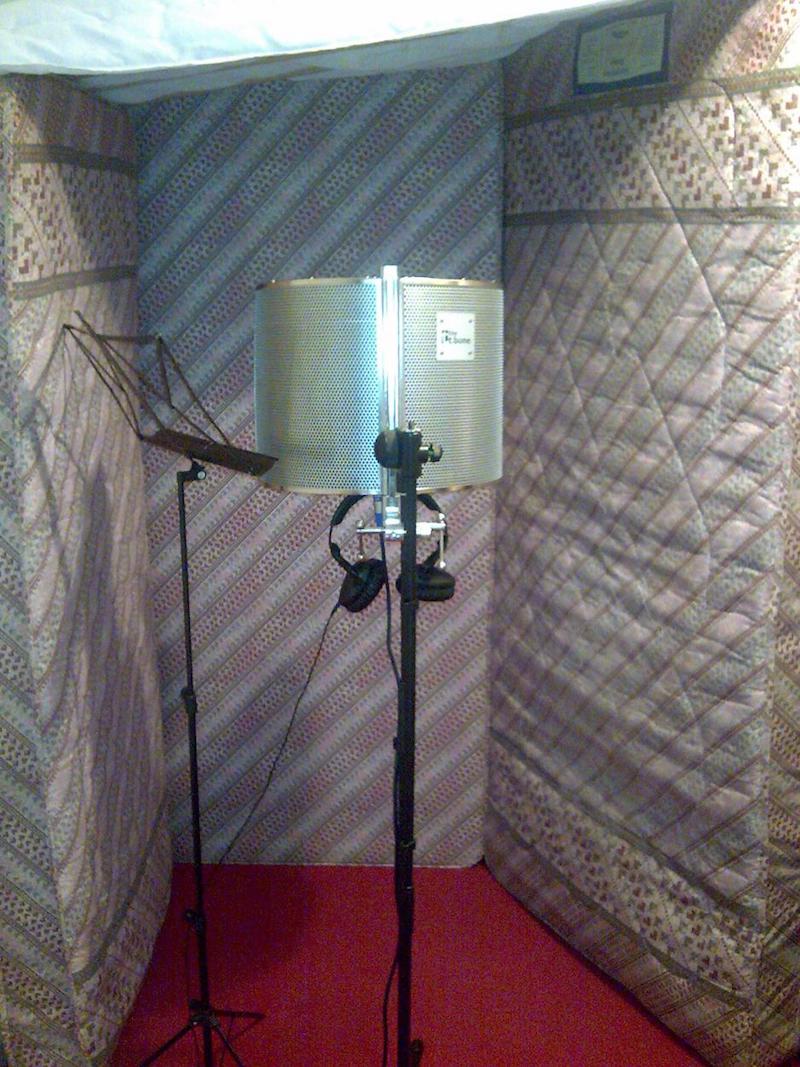 The mattress booth is without a doubt a cut above the closet. This is primarily because the larger, thicker mattresses absorb a lot more material, “deadening” the space in which the vocalist is singing. The biggest problem with the DIY mattress booth is that it’s a total PiTA to set up, and you’re restricted by how many spare mattresses you’ve got lying around.

If you’re willing to experiment, you can try different arrangements based on number of mattresses on hand. With one, toss it up behind the vocalist to absorb on-axis reflections. With two, you can arrange them in a V-shape to absorb some of the off-axis side reflections.  If you’ve got three, you’re in C-shape territory, with a mattress behind and on both sides of the performer. With four or more, you can add a “lid” to the fort for maximum absorption.

Is the mattress booth effective at absorbing reflections? Totally. Will it yield a more balanced vocal recording as a result? It will. Is it practical and easy to set up? Not so much.

Give it a shot if you’re willing and able, but it’s far from the all-around best option. 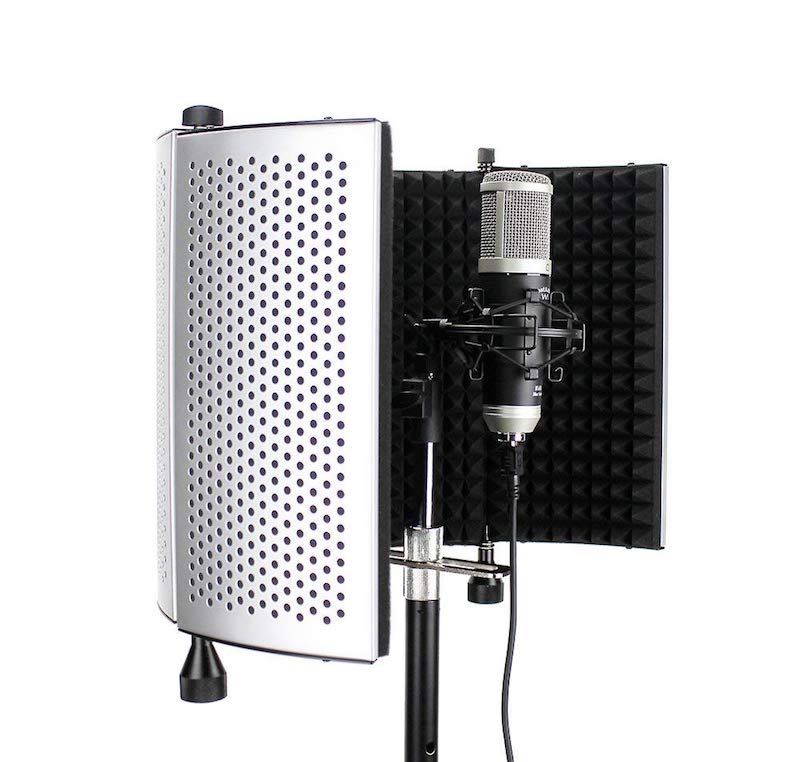 These are probably the least effective and most misunderstood/misused contraptions out there. We think they’re probably amazing because they’re professionally manufactured and cost around a couple hundred bucks, when in reality they’re basically expensive mic stand ornaments.

Made to be positioned behind the mic and in front of the vocalist, the reflection filter is almost entirely ineffective for any mic that isn’t omni or bi-directional. This is because, at 180 degrees off-axis, the microphone’s sensitivity is at its dullest, meaning you aren’t picking up any of those reflections anyway.

A better position for a reflection filter is behind the vocalist, where reflections coming from over the singer’s shoulder are on-axis entering the mic.

On their own, these are the least effective absorbers out there. 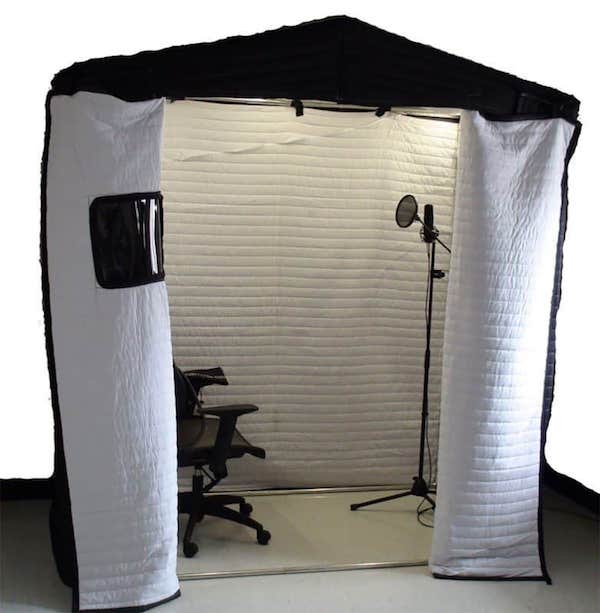 This is probably the best all-arounder as far as DIY vocal booths go. It’s pretty cheap, doesn’t require too much assembly, can be broken down and taken on the go…and best of all, it covers the vocalist on all sides.

The blanket booth is essentially a PVC pipe frame built to drape blankets over, creating a “room” for your vocalist to record. There are many different how-to’s detailing the build, and you can get as complex, or keep it as simple, as you’d like.

What’s great about PVC is that the fittings don’t have to be glued to be sturdy, which means you can break down the booth for storage or on-the-go recording as necessary.

Of course, in the blanket vocal booth vocalist is completely surrounded to absorb reflections at every angle, making it the best all-around DIY vocal booth.