Recording Vocals [Tips from the Pros]

If you struggle recording vocals from time to time, it’s nothing to worry about! Every time a new vocalist steps up to the mic, there are a bunch of variables at play which can skew our results from session to session.

With these pro tips in mind, you can enhance your recordings and mixes for more consistent results over time. Like anything else, learning how to record vocals to the best of your ability is an ongoing process, and there’s always room for improvement!

Unless you have a very specific creative reason not to, it’s best to keep your vocals dry on the way in. Printing reverb or delay is dangerous, as it can present a whole bunch of problems when it comes time to edit and comp. Reverb or delay tails will very noticeably be cut off as you edit breaths, etc. Time-based effects need to decay naturally to create space, so any choppiness will be distracting to listeners.

It’s also a good idea to keep EQ relatively light, possibly with just a high pass filter to contain the unnecessary low end. It’s much easier to EQ a full-frequency vocal while mixing than having to add back frequencies you might have removed on the way in.

You’ll probably also want to keep vocal compression fairly light, averaging maybe 1-3 dB of gain reduction and about 5 dB on peaks. It’s also best if you use a really great sounding compressor like an 1176 or LA-2A so you don’t print bad sounding compression.

No matter what you do, if the room sounds terrible, your recordings will suffer. Like we mentioned above, vocals should be recorded as dry as possible, so it’s generally best to avoid spaces with a lot of natural reverb or highly reflective surfaces. Contrary to popular belief, you’re also better off avoiding closets. Unless you want your vocals to sound like—well—they’re recorded in a closet!

In totally untreated rooms, frequencies bounce around and subsequently amplify each other or cancel each other out. This is called comb filtering—when charted, the frequency response shows sharp peaks and troughs resembling a fine tooth comb—which makes your vocal recordings sound thin and out of phase.

The best way to avoid comb filtering and unwanted reflections is through acoustic treatment. At the very least, treating the first reflection points in your room and placing your artist near absorption panels will greatly help with the overall vocal sound.

Basically, you want the room to be dead, but not so dead that the recordings take on an unnatural quality.

3) Make sure the performer is happy with their headphone mix.

Artists aren’t always able to communicate their needs, so it’s really up to you to check their cue mix and communicate with them. Ask questions…Do you have your own headphones that you prefer to use? Do you want reverb or delay in your headphones?

If they don’t have their own headphones and you have more than one set, let them try different models out. Some singers may want a brighter sounding headphone, and some might want something with more bottom end. Give them what they need in the headphones so that they can perform comfortably.

It’s fine to give them reverb/delay in their cue mix without printing it.

4) Make sure the vocalist is physically and mentally comfortable.

Read the room and know your artist. Pay attention to little things, like the temperature or lighting in the studio.

Recording vocals effectively is very much about making artists feel at ease. You can do so by having everything set up for them before they begin to record and communicating once you begin. For extra brownie points, you can have some drinks/snacks ready and waiting! 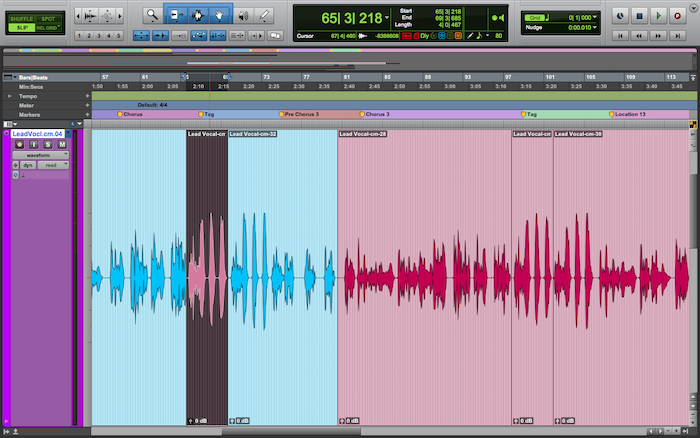 Rarely does a vocalist blaze through an entire track in one take without any mistakes. For the overall best sounding vocal production, you’ll probably want to record multiple takes of sections or phrases and comp them later.

An easy way to get passes of a section is to set up loop recording/automatic playlisting in your DAW. In Pro Tools, simply make a selection, enable Loop Record (numeric 5 on the keyboard), and start recording (numeric 3). Be sure you’ve also enabled a preference which automatically creates a new playlist while loop recording.

You can also manually punch in for multiple takes of a section. If the artist is up for it, you can review and comp takes together so they know exactly which performance is going to make the final cut.

6) Manage plosives as well some sibilance on the way in.

Recording vocals means managing frequencies in the human voice. Exaggerated “p” and “b” sounds, called plosives, create popping sounds on a vocal track. In speech we don’t even notice them, but when the acoustic energy of a plosive hits a microphone diaphragm, it’s obvious.

They do a decent job of minimizing the biggest pops. Better yet, they’ll keep your vocalist from eating the mic capsule!

Literally on the other end of the spectrum is sibilance: the harsh “s,” “t,” and “ch” sounds that the mic picks up when recording. Some voices are more sibilant than others, but there’s a little bit of it in everyone.

For the most part, dealing with sibilance in the mix is most common, using a bit of surgical EQ and de-essing. But, you could also have the vocalist sing slightly off-axis to the capsule. This technique works on plosives as well.

There’s even another old trick which is to rubber-band a pencil to the microphone vertically across the capsule. The idea behind this is that the highest sibilant frequencies are split in half, diverting them away from the diaphragm. Try it out if you’re struggling to reduce sibilance when recording vocals.

There are hundreds of microphones out there. If you’re just starting out, you might only have 1 or 2 at your disposal for recording vocals. If the singer is up for it and time permits, do a shootout between them and find the one that you both think sounds the best. Or, record into both at the same time and choose later.

Before you even invest in a vocal mic, though, do the research. Chances are you’ll want a bit of an all-arounder that can handle other instruments too.

On the other hand, what do you do if the singer brings their own mic? Let them try it. They could believe that their voice sounds best through their microphone, and if you force them to use something else you risk killing their performance. Keep in mind, performance always trumps microphone choice!

8) Make sure the vocalist is ready to record.

There are two schools of thought here. The first is that the singer should be well rehearsed. If they’re still trying to figure out the melody or it’s been a several months since they wrote the song, you will want them to rehearse and be ready to sing.

Alternatively, some singers work best when they are in the moment or in the zone. As you’ve been recording other members of the band, the vocalist has been listening, writing lyrics, and humming the melody quietly in their head. With everything ready for the vocals and a buildup of excitement, you have a vocalist who’s ready to give you an excellent performance.

Often the best vocal is the one that you recorded when the singer finished writing, was in the zone, and was in the right place. If they’ve been writing lyrics and haven’t sung it yet, then they likely need to rehearse. If the lyrics and melody are done and they are in the zone, get the take!

Recording vocals is all about balancing the technical engineering side and keeping your client comfortable and happy!