Understanding Guitar String Gauges: What Gauge Is Best for Me?

It’s easy to underestimate the importance of guitar string gauges, especially when you’re brand new to the instrument. There are a number of factors at play when choosing the right strings, not excluding your guitar’s scale length, the tuning you plan to use, and the feel you’re after. It can be a little daunting for beginners, but once you’ve settled on what works, it’s unlikely you’ll change again. Let’s talk about all things strings!

What Does Guitar String Gauge Tell You?

String gauge is a measurement of how thick the wire is — more specifically, its diameter. This is a critical measurement that plays a huge role in how a guitar sounds and performs. Much of it also comes down to personal preference and what feels the most comfortable, in addition to what sounds the best under everyone’s individual fingers. For instance, someone with a heavy touch playing light strings might inadvertently push them out of tune, whereas someone with a soft touch wouldn’t.

How Is String Gauge Size Measured?

String gauge is measured in one thousandth of an inch. A 10-gauge string would be 0.010″, and a 46-gauge string would be 0.046″. The thinnest string will always be the high E (1st string), while the thickest will always be the low E (6th string). For shorthand, we also refer to sets of strings by their thinnest diameter. So if the high E string is 10-gauge, we call the whole set “10s.” If the high E is 9-gauge, we call them “9s.”

How Can You Know What Gauge Your Strings Are?

If you’re really unsure and need an exact measurement, then you can purchase a digital caliper to get a reading. Experienced players would be able to tell the difference between a set of 8s and set of 12s, for example, just by feel. They may or may not be able to guess the gauge outright.

If you’ve never changed the strings on your guitar, look it up online and check the spec sheet. Manufacturers tell you what string gauge they set the guitar up with at the factory. And if you’ve been happy with how the guitar plays and feels, you can grab a fresh set of those strings and swap them out. On a side note, changing string gauges usually requires a complete guitar set-up to dial in neck relief, intonation, and action. Changing the tension causes things to move, and you’ll need to compensate for that.

What Are the Common String Gauge Sizes?

A medium gauge is typically 0.011″ to 0.048″. Again, we’d refer to these as 11s. This is a good string gauge if you plan to tune down, say half a step or maybe even a full step. They’ll give you a similar tension as 10s would in standard.

The most common heavy string gauge is 0.012″ to 0.054″ — 12s. These are ideal for down-tuning multiple steps in order to maintain adequate, playable tension when actually taking tension off as we loosen the string to tune down.

An extra heavy would be something like 0.013″ to 0.056″ — 13s. As with all sets of strings, there are variations on the gauges after the thinnest string, so you might see something as thick as a 0.065″ on the bottom in certain packs. Stevie Ray Vaughan is actually famous for playing 13s on his two primary guitars, Number One and Lenny.

Are Acoustic and Electric Guitar String the Same Gauge?

Acoustic guitars typically employ thicker strings in general than electrics because they need to be able to resonate and project sound. So when we’d call 8s extra light on electric, extra light on acoustic would actually be 10s. A regular acoustic set would most likely be 11 or 12 gauge.

Plus, the other string gauges will vary on acoustic versus electric as well. So while the measurement and naming protocol is the same, the sets will be optimized differently for acoustic guitars. 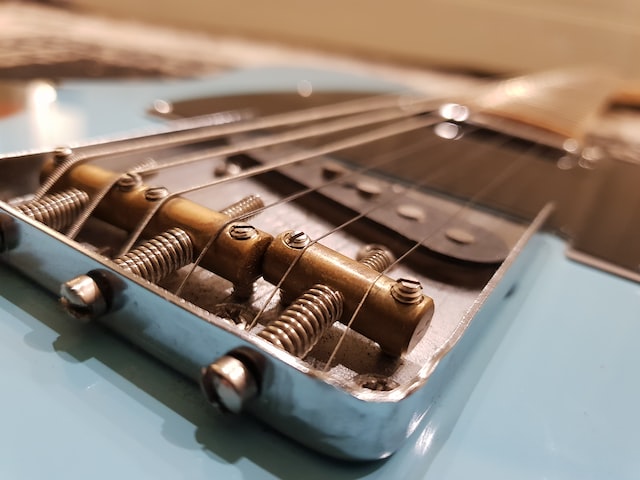 How Does String Gauge Affect Sound?

Generally speaking, thinner strings produce more treble and “plink.” Thicker strings are mellower and have a bit more bass to them. You’ll probably find a greater difference in sound between manufacturers, using the same gauge, as opposed to lighter versus thicker strings.

How Does String Gauge Affect Playability?

Playability is the single most important factor influenced by string gauge. Thinner strings are easier to bend and forgiving on beginners, but they’re also easier to accidentally bend out of tune. It’s also a bit easier to get very low action on thinner strings, while the increased tension of thick strings might cause your action to be higher.

You also need to consider your guitar’s scale length — the most common being 25.5″ (Fender scale) and 24.75″ (Gibson scale). Increased scale length means more tension, so you might be more comfortable with thinner strings at 25.5″ and thicker ones at 24.75″. At the end of the day, it really comes down to preference and what sounds good to you.

Not necessarily, though beginners will find thin strings more forgiving on their hands. Less tension makes fretting easier, especially when someone doesn’t yet have the dexterity and callouses that someone who’s been playing for years has. Skill level is much less of a determining factor than tuning, scale length, and overall feel.

Conclusion: How Do I Choose the Right String Gauge for Me?

Experiment! Beyond just that, though, consider the tuning you want to play in. If you’re going to down-tune, you’ll probably want to up the tension a bit with thicker strings like 11s or 12s rather than standard 10s. If you play in standard tuning with the 10s from the factory but find you need a bit more relief, downsize to 9s and see how those feel.

Also consider the many “hybrid” string packs that exist. Commonly you’ll find packs with standard top gauges and heavier bottom gauges. For example, I have a guitar strung with 11-56 strings in Drop C tuning. It’s important to just test out different guitar string gauges; gather some information from the online community of guitar geeks, and then get playing!